I have a couple of trade pals north of the border. One of these fine gentlemen runs Sportscards From the Dollar store: http://buckstorecards.blogspot.com/ .  I get a bit of my hockey fix from Doug's blog.  I have no valid reason to collect hockey cards. If I had time to enjoy a second sport, hockey would be my choice, with curling as a third. I hate ice. I don't like it in my water, on my car or the road. Doug's sent Blackhawks in the past, trying to pull me into the trap but his most recent mailer contained zero ice.

There were a nice assortment of Tigers as always. This batch of vintage is divine! OPC Horton is a true beauty! 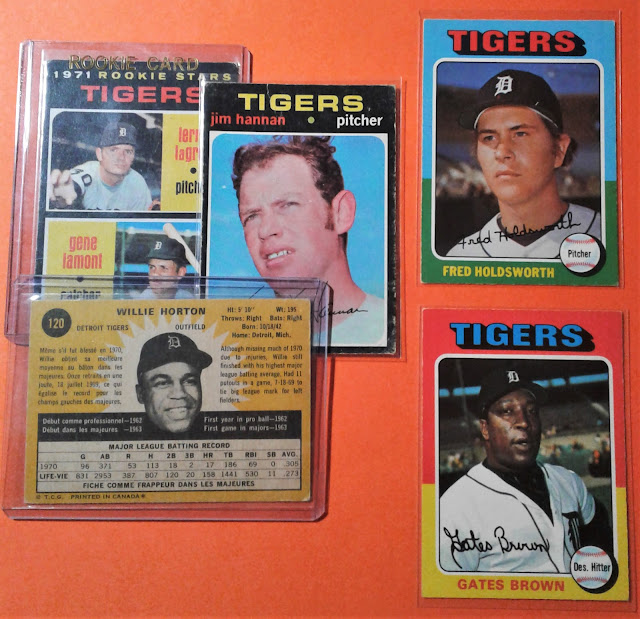 This package contained a thoughtful, personal touch. Doug knows I'm an Okie - from OKC, not Muskogee which is a couple hours east.  He picked out a few Sooners to help me feel a bit closer to home.

Granville Liggins?  Born in the Big T - Tulsa Town, an OU grad once drafted by the Detroit Lions no less.  A  right defensive tackle, Gran played with Calgary from 68-72. This one time Okie felt at home in Calgary, thinking it so much like his beloved Oklahoma that he became a Canadian citizen.  Perhaps the land in Calgary is flat?  Longer winters than I already experience in MI do not leave me longing to move even further north. Maybe I'll get to Calgary one day to form my own opinion.

Sometime ago, I commented on Doug's blog about my 80s interest in pro-wrestling. My sis was a big fan so I kinda got sucked into taking her downtown every month when the UWF came through.  Tickets were cheap so we always sat somewhere in the first five rows by the ring.  I was naive and quiet, and not much for fighting.  Chairs flying, bleeding foreheads, the figure four moves - I must've been there for the guys. We both were. We were fans of two tag teams - Rock n Roll Express and The Fantastics.  I was a big Tommy Rogers fan, the dark headed half of The Fantastics.

After one show, these tuxedo clad men headed up to Tulsa for a match the next day. My sis and I decided it would be fun to tail their limo up the the highway into far north OKC.  We weren't the only girls with the same idea but happened to be directly behind them.  Their car pulled over into a lot just before entering the turnpike. Seems they wanted a moment with their adoring fans. Actually the blond Bobby Fulton did. Tommy behaved. I know because Bobby waved us over to the limo. He pulled my sis into the car and immediately put his hand up her shirt for ..well you know.  At that point, she was done.  I don't think we ever went to another match after that. We were both a bit disillusioned. Well, at least my Tommy behaved.

Doug included this way cool Leaf auto of Robert Gibson which brought back a lot of memories from those limo chasing days of the 80s. 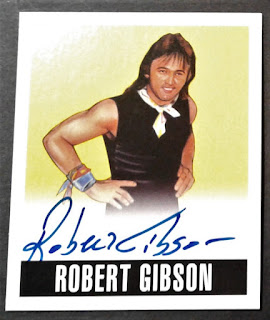 I'm still not sure where all the time goes. Over 30 years have passed since we stood on the highway peering into that limo but the memories are vivid. I think we've aged a fairly well, all things considered, maybe better than these fellows. Robert is now partial owner of a deep-see fishing tour in Alabama. Ricky operates a wrestling 'School of Morton.'  My Tommy died in 2015, for reasons undisclosed.  A web search reveals Bobby is now a born-again Christian, groping bibles in lieu of boobies.

Thank to Doug for taking me back 30 plus years. Those were innocent times in my life. I'm still a bit naive but that's ok with me.