OLD LAPTOP: the Dell from hell

Let me begin by reiterating - I do not miss my employer. I do however, miss their laptop. Working on this Dell from 2009 has presented several challenges. It certainly hinders my blog presence.  Last week's post took HOURS to create.  I purchased this beast in 2012 thinking at that time, it was a new machine. It never occurred to check the service tag for the factory date, which I did this week.  That's when I found it was actually three years older. 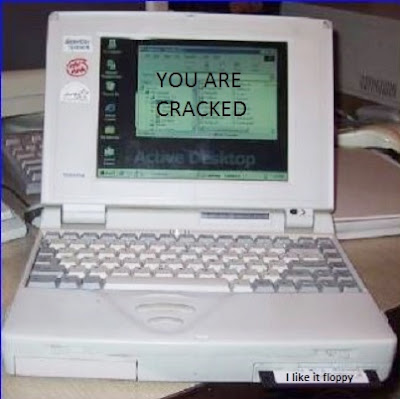 This crap happened in November too. I bought new 85,000 mile tires from Sears for the Baja in 2012, thinking these would last many years. After a blowout pulling into my drive around Thanksgiving, I needed a new tire.  What I found out though was I needed FOUR new tires. All were dry rotting away BECAUSE THEY HAD BEEN ON THE SHELF AT SEARS SINCE 2009! No wonder they are financially insolvent. Sold me tires already three years old?? 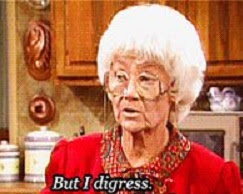 I'll have a new Lenovo machine by the end of month, if all goes as planned. I'm doing the research now. I don't game or stream much video but would like to load music, pictures and basically, just be here more. In the country, expensive-by-the-gig satellite internet is my only option. The machine can't run much faster than the network allows. If any of my tech savvy pals have advice for processor speeds and recommended apps or software that should be preloaded through Lenovo, I'm happy to listen. My thought is I can get a better machine directly through them than I would at Costco or Best Buy. 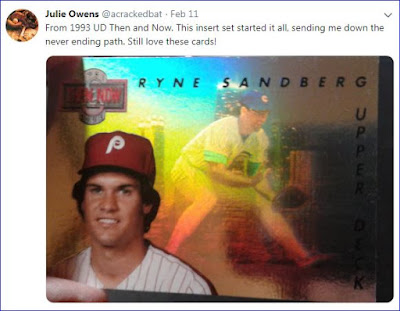 Mr. Jon Pennysleeves hinted that I should share the story behind my collection. A few years have passed now [crickey!] and so many of you have been kind to lend me your ear and precious time continually. If you'd like to know how I made it to this point with you, please check out my first few posts. Instead of recreating the wheelie, I offer this link to Cardboard Bug Bites:

I hope you enjoy the ride!  Thanks for reading and sharing the hobby! 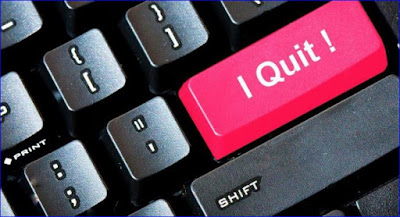 Last Friday,  the first lovely day of February, I walked out the door for the last time. I can't begin to share just how good that felt! Any accounting firm rolls into tax season around February 1. My absence will be an inconvenience for awhile but certainly, I can be replaced.  What makes this such a unique situation is my coworker and good friend said 'sayonora' too, with the 5th as her last day. She left for the same reasons. While she can also be replaced in time, that office is in some serious trouble from an administrative support standpoint, not to mention the lack of their only onsite tech support, which I provided. There are so many good people in this office. Unfortunately they are not among the Leadership group.

We were short-staffed already. A new 20-something gal [our savior] joined the firm in December. It only took a couple weeks before we realized she would be no help to us. In one of our first meetings, we discussed work sharing. Her response 'that isn't convenient for me.'  I knew then it was time to get the heck out of there.  In the few days since I've been gone, she's been blaming me for her ignorance. 'Julie didn't tell me that.'  Twenty minutes late everyday and wanting to change her hours already - not my problem!  Within two days of leaving there, my blood pressure dropped to 128/75.  It was averaging 135/88. I've also lost a few pounds since turning in my notice.

I'm applying for positions much closer to home, knowing the salary will be half what it was. I'm covered financially for a few months so the urgency for work isn't there yet. What I do have is time for the hobby!!! My catchers are all in two binders now! More so - I have time to catch up on some wonderful trade packages!

Let's take a quick trip to 1975 Baseball Cards to look over a fat pwe from Steve: 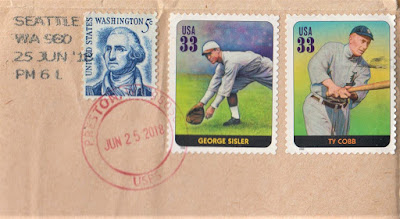 Yes, the postmark is from June. Put your judgements back in your pocket. Focus instead, on these phenomenal Legends of Baseball stamps issued in 2000 by the good old postal service!  I was excited to find the cancellation missing old Ty so added this stamp to his pc. Back in the day, I purchased a full sheet of MLB's All Century Team: 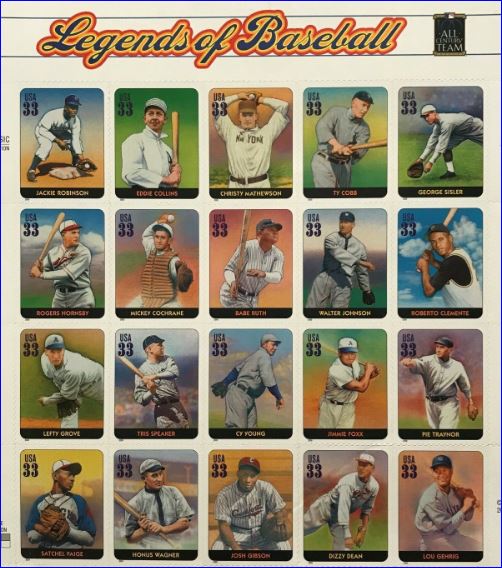 Inside the envelope was a nice grouping of Tigers, including my first Fielder 'glow backs' from 1991 Topps!  Check out the link for details. Lacking a blacklight for testing, I take Steve's word for this.  He included the A&G Gaea mini for a feminine spin on my envelope! A nice touch, bringing all that testosterone down a notch! A thoughtful grouping of cards, Steve! Thanks again - and I'm so sorry it's taken so long to properly thank you! 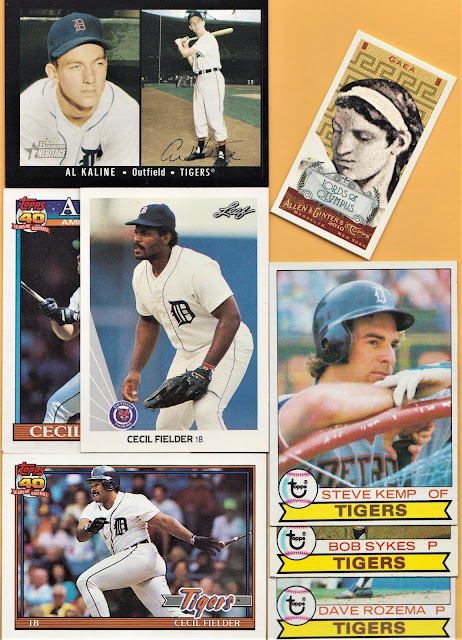 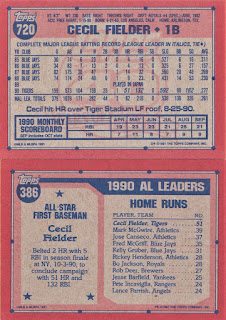 In July, I participated in a Cards on Cards 10th Anniversary group break. Kerry was busting 1998 and 1999 Team Best, 2000 Team Best Extended, 1999 Stadium Club and extras, which had me pouncing on the Tigers slot!  It was a generous thank you to his readers and trade partners! Here's a sampling of the cards I received: 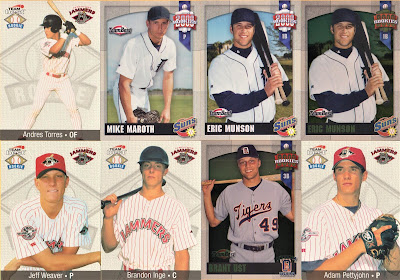 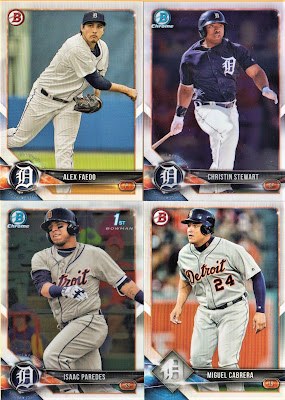 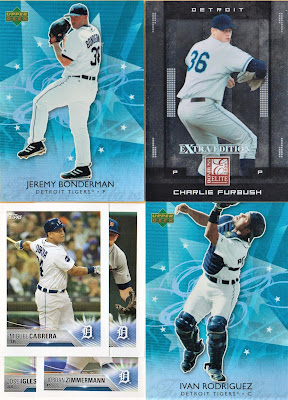 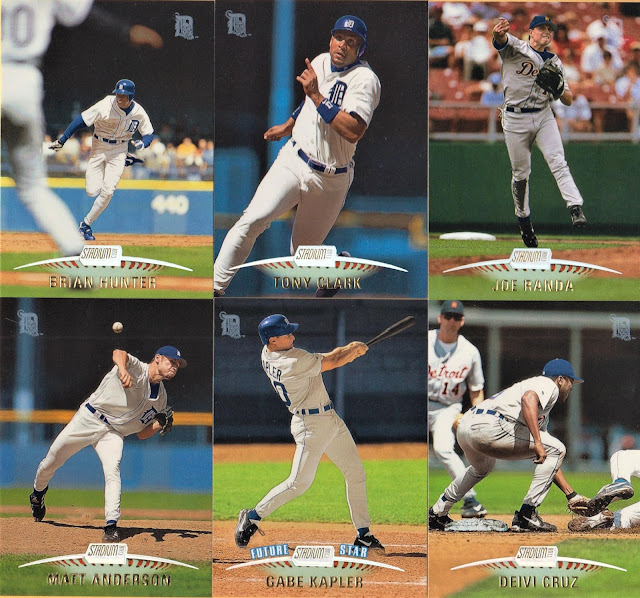 Not long ago, he dropped a few more cards on me. We helped one another with our 2018 Heritage set build. Kerry included other cards from my wantlist too along with a surprise auto! 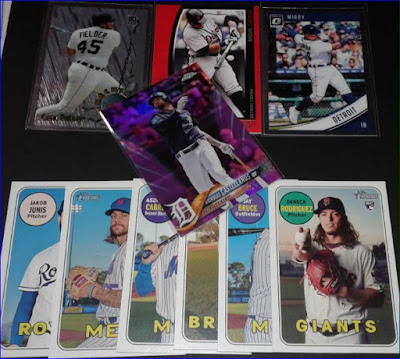 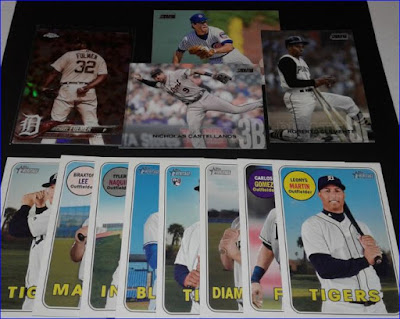 One more late acknowledgement and thank you to GCRL at the  Cards As I Seem Them.  This Dodger collector send a couple of nice packages in 2018. He may think I've forgotten  - and who could blame him? There were some beautiful cards included: 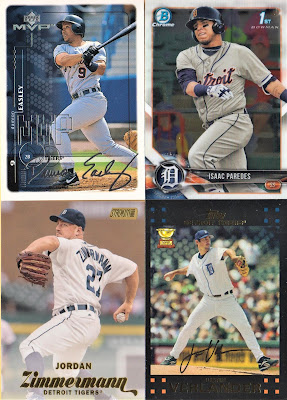 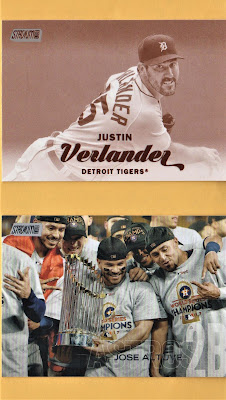 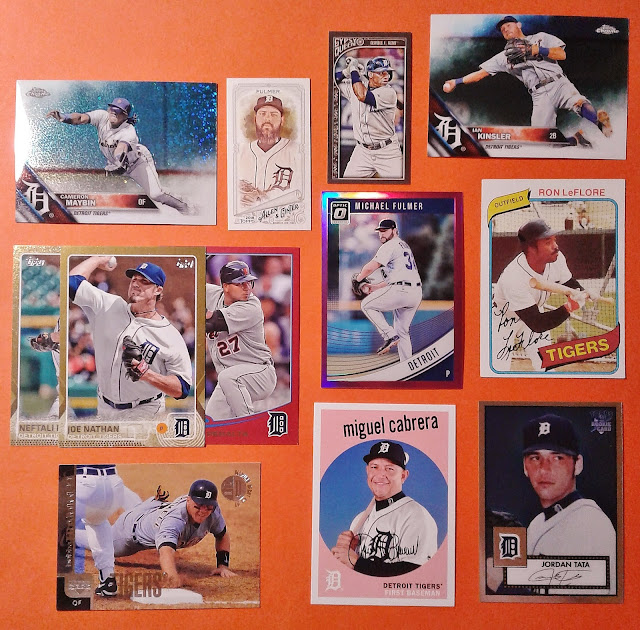 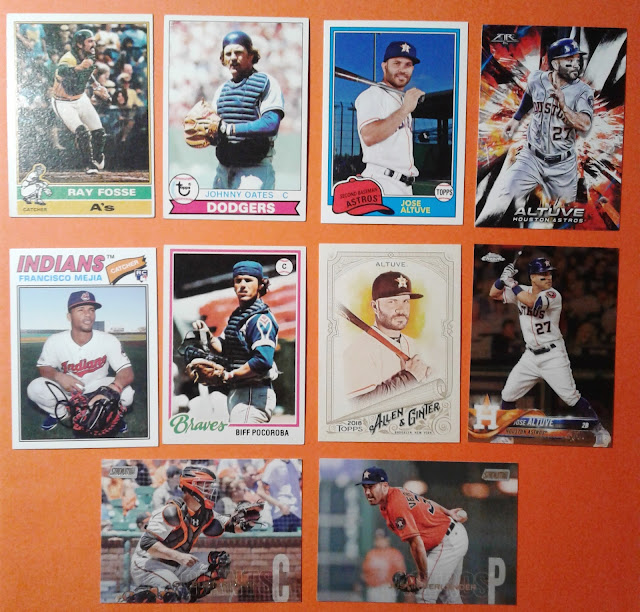 Among the new, there are some handsome vintage catchers - 76 Fosse, 79 Oates and a 78 Biff!  Jim, please forgive the time it's taken to share these cards!

It's taken two hours to upload pics to this post. One of the nice perks I had with the firm was a new laptop every two years. I'm back to my 2010 Dell with Windows 7. Oh the agony!!!!!!!!!!!!  I'm already looking for a new machine. At least this old Dell still works - as long as it's plugged directly into power.