Sniffing Out a Trade

Tim recently offered a bar of gold for trade on his sweet-smelling blog.   The golden Miguel Cabrera was impossible to ignore.  We'd recently completed our first trade which left me running low on Yanks.  Tim and I worked it out though.  My idea of Yankee leftovers was a fresh plate for Tim. I had cards he wanted!   Behold the 2015 Topps Golden Idol and offering highlights from  I Love the Smell of Cardboard in the Morning: 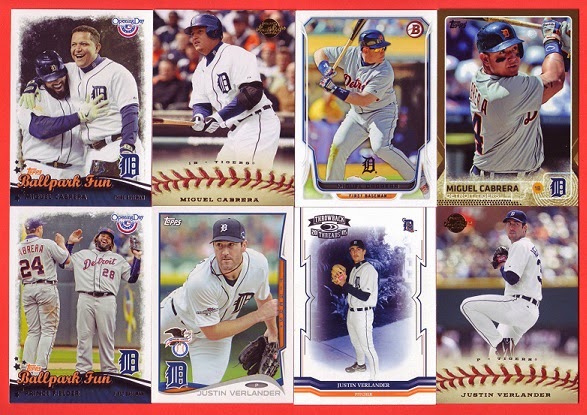 A great assortment of Tigers here.  I simply love cards with raised faux seams! 2009 Sweet Spot has a delightful texture; a design hit with me.  I can't stop touching these cards.  The 2013 Opening Day Ballpark Fun duo reflects the feeling of elation I receive from the game of baseball itself... and in collecting these little pictures of grown men. 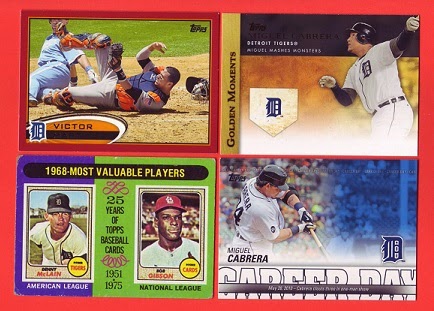 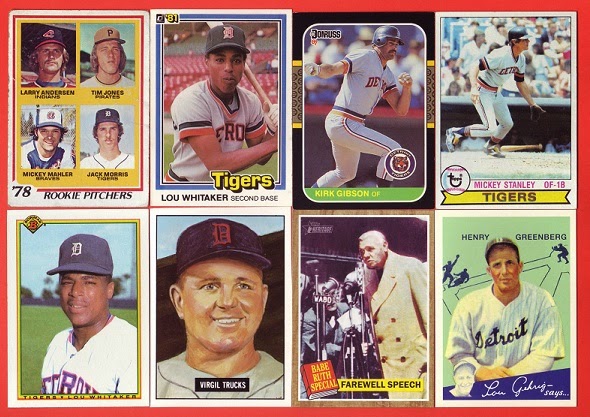 What?  You didn't know Babe was a Tiger?  I do collect a few Yanks, though admittedly most are deceased. A nice assortment of retired stars in this scan. Most unique? Old Virgil Fire Trucks.  His name alone is standout!  This treat is from TCMA; a 1983 Yankee Yearbook insert neatly cut and separated from its page mates.
Tim did NOT forget the distracting, shiny things!  A couple of minis snuck their way into the scan too.  Minis - not to be trusted.  I'm always suspicious of these small statured pieces of cardboard trying to prove they are equal to or better than, grown up cards.  Napoleon complex. 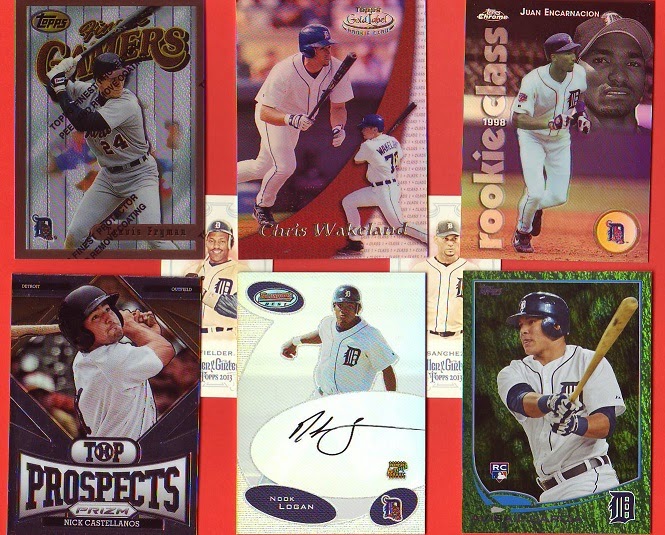 Chris and Juan are refracting and Fryman wants an appeal but the jury is undecided.  Nice on-card from The Nook, 2003 Bowman's Best.  Avisail Garcia RC in emerald garnish!  That's a beauty!  I'm collecting Castellanos pretty heavily.  He needs some patience at the plate, striking out too often. Nick is currently a favorite Tiger.  Any Tiger not found  on the DL tends to be a favorite right now.

Tim sent 50 cards for what was originally a one card trade.   Who can complain when this happens?  Looking forward to a third round!  Thanks much Tim!
Posted by acrackedbat 1 comment:

It's been reported many times over, that breakfast is the most important meal of the day.  For many folks, this is likely true.  They rise, eat their Wheaties and go about their day.  I'm not usually hungry in the morning - drink my coffee, read awhile and out the door to conquer the world I go.
A package I received last month brought to mind yet another reason why I should've listened to my elders, "eat your breakfast."  Cereal.  Plain and simple, with or without milk. Renowned ROY Blogger Tony of Off Hiatus Baseball Cards sent a stack of cards with a note which reveals his sense of humor: I hope you don't mind the random stack of Kellogg's I've sent.  Oh Tony, what a knee-slapper!  Don't you ever do that again - ever  (I never said not one time.) 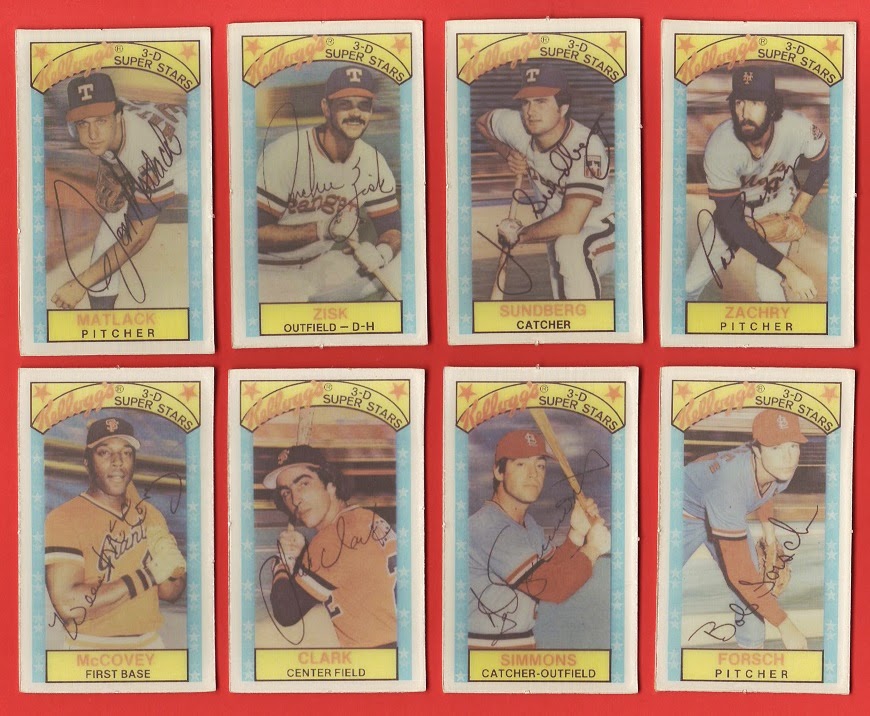 These fellas are from 1979, one of my fave K-3D designs with the bright yellow and blue combo. Skipping breakfast, going to high school I never saw their smiling faces staring back at me from my cereal bowl box.   It's a shame these days are gone, and not just because I want my youth back.  Young collectors will never know the joy of finding their favorite players' cards in food products, at gas stations, on advertising panels etc.  It's all about the big green $ now. 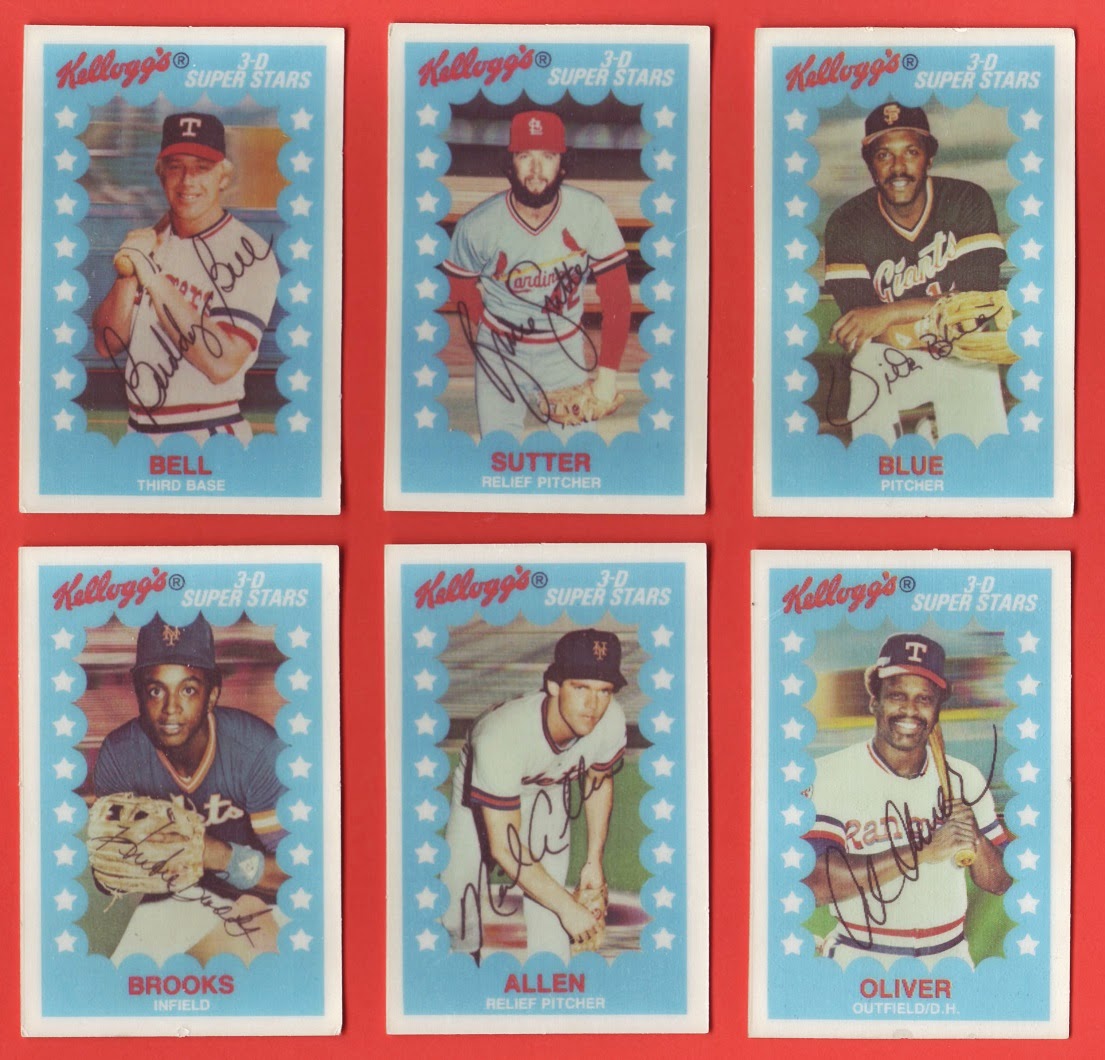 1982 brought another K-3D design to collectors. Still a good-looking set; blue background and white stars on slightly larger cardboard.  The bright yellow colors gone, not unlike my own cheerful disposition.  I would be graduating soon and not so excited to make the next move. 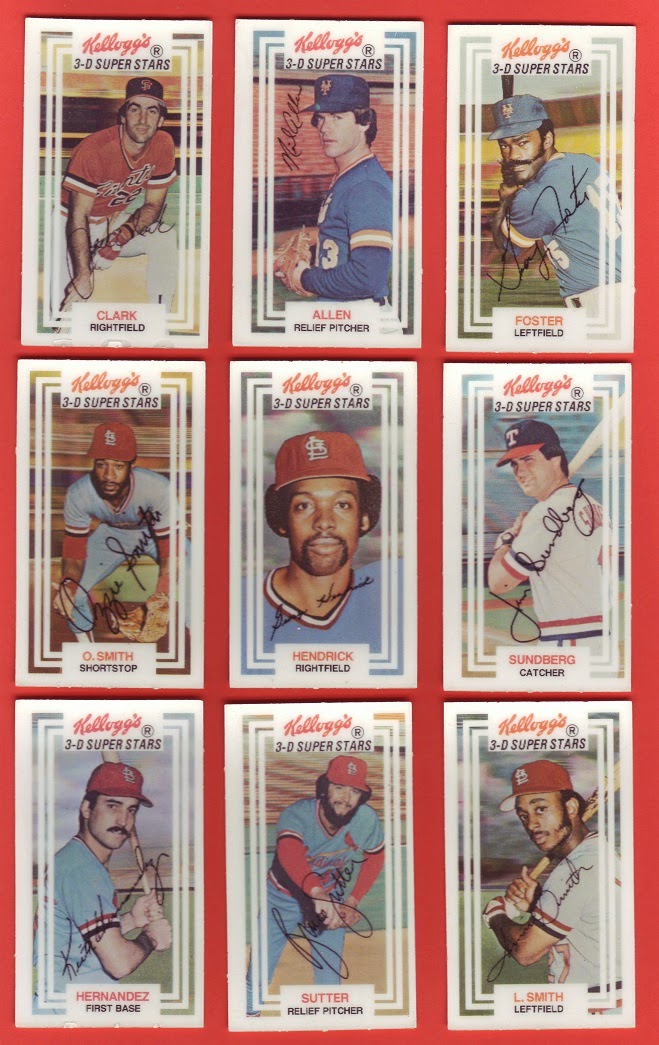 For their final release, 1983 Kellogg's returned to the smaller card and lost the color. Seems they'd lost all inspiration at this point. I know I had, but managed to pull it together, beginning my college days still unsure what to do or really, who to be. Years had to pass before I found it was ok to be ME.

It's as if Tony knows me, that I like living in the past. He even included a fantastic oddball ticket to the 5th Annual Sports Collector's Convention in 1984.  I can't wait to go!  Maybe I can pick up some early Kellogg's cards while they're still cheap!  Today's prices on the early 1970s issues are jacked up!

Tony, thanks for another ride in the 70s time machine!  You're a great driver! 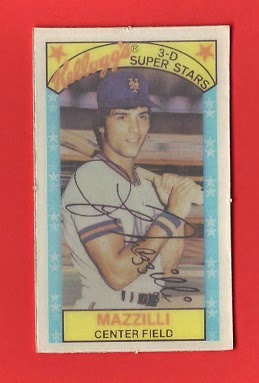 70s heart-throb Scott Baio - or is it Lee Mazzilli? 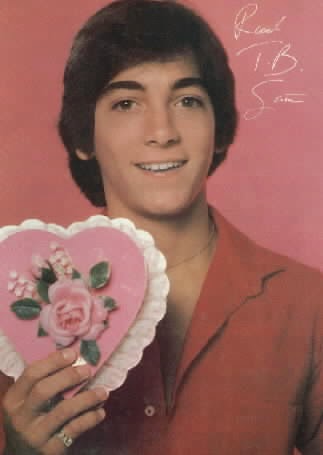 I'm counting down the days.  Trading good Tex-Mex for Buddy's Pizza;  100+ degree days in July for a rare 90 degree day during summer; tornados for snow and the Texas Rangers for my Detroit Tigers -  I'm moving.  My Texas sunsets are numbered.  I've grown tired of the concrete and traffic, and have reached that time in life when a reassessment is necessary.  Over the last few years I've spent a good bit of vacation time in North Carolina and Michigan, knowing one would someday become home.  It's time to be closer to family, and settle in for the second half of a wonderful life.
The nice cards I received from Gavin during one of his Baseball Card Breakdowns  coincided with my thoughts of an early retirement - before turning gray-headed!
2004 Topps Retired Signature 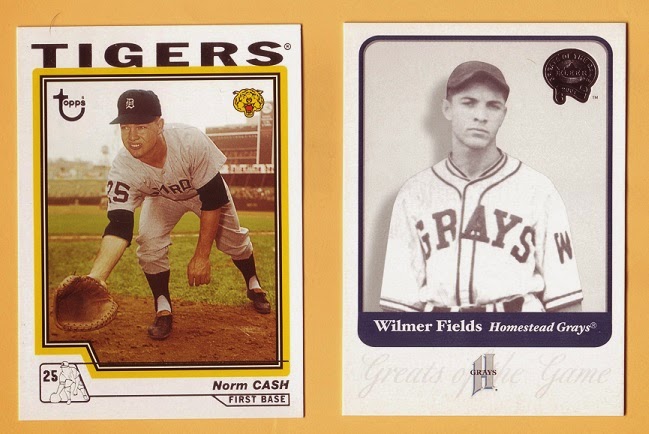 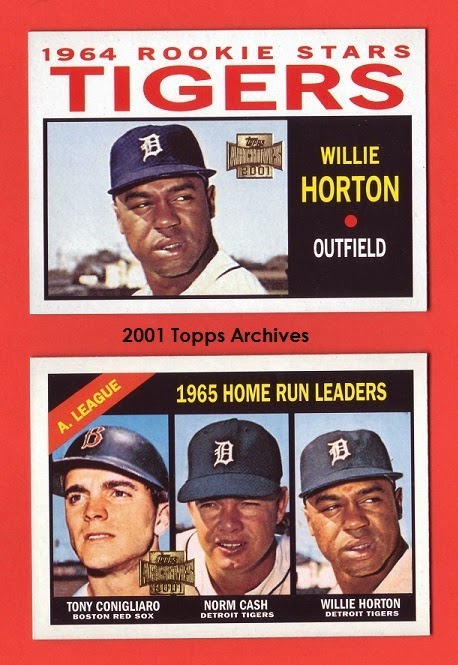 These are attractive cards printed on shiny, heavy cardboard. The theme for 2001 Topps Archives was based on reprints of  many rookie cards  and last card appearances.  Topps went back to 1952 and stretched it out to the year 2000 for a 450 card set.  If I'd purchased these cards upon their initial release only to find reprints from the previous year...well it's just like Topps.  No surprise would be a surprise. 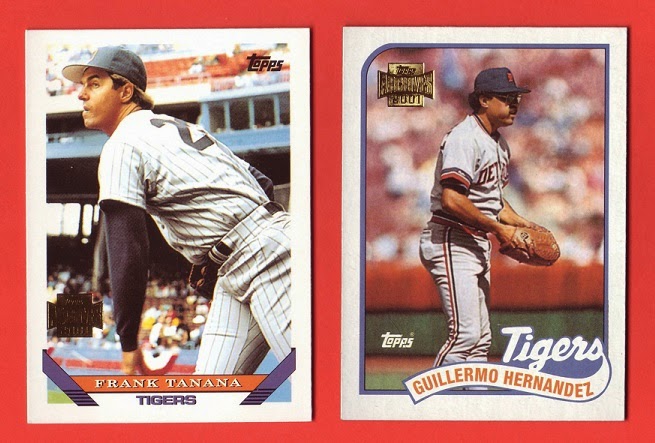 My move isn't quite an early out.  I'm fortunate to work for an accounting firm with offices in nearly every state.  My employer is working on a transfer at this time.  I'll take a short leave of absence beginning May 15th to start the move process and settle into my new home. When I return to work during the first week of July, I'll be the rookie in a new office. 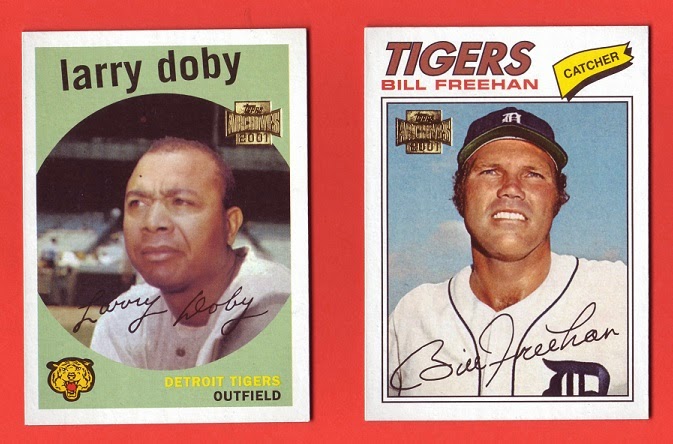 My singular complaint with this Archives edition is the tiny print on the reverse side.  Assembling this set could not have been an easy feat! The actual card number is in miniscule print on the copyright line. At my age, a larger font would've been appreciated. 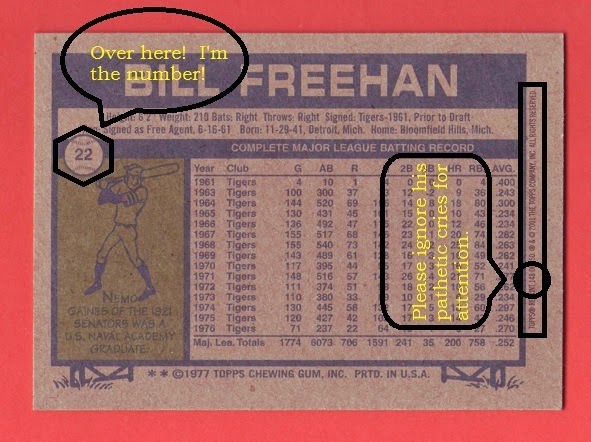 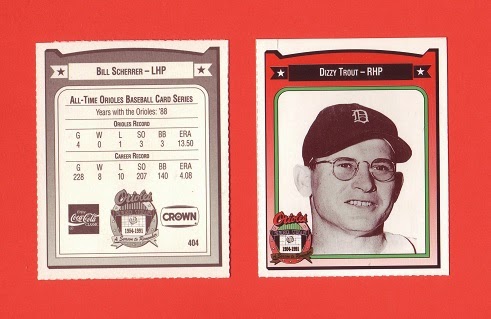 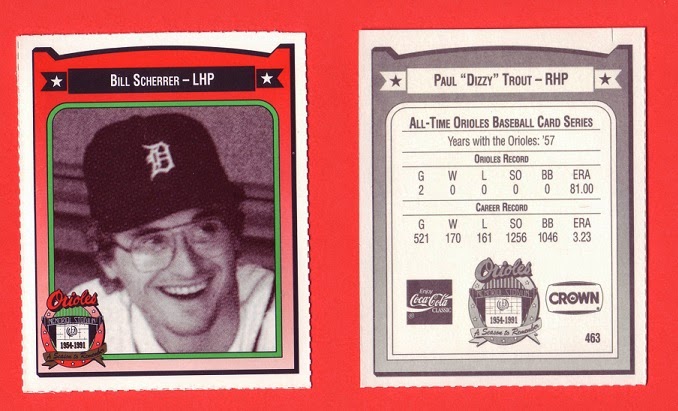 The dreaded part of any move is packing. Most all my cards have already made the move ahead of me.  I kept only the accumulation of cards set aside for my regular trade friends - once moved and unpacked, I hope to make new trade buddies too.  Of course I continue to shop, which only adds to the burden. Such a terrible burden...

I came home from work recently to find a somewhat large box waiting for me.  Something else to move.  The return address revealed this to be from a trade partner...one of the  Boys of Summer.  Michael  Orange and Black Wax Kaiser began blogging during the 2014 season and mysteriously disappeared as soon as his team won the Series.  Back like Spring Training, Mike is stuck in the 80's.  Perhaps you can drop by his blog and call him back to reality. 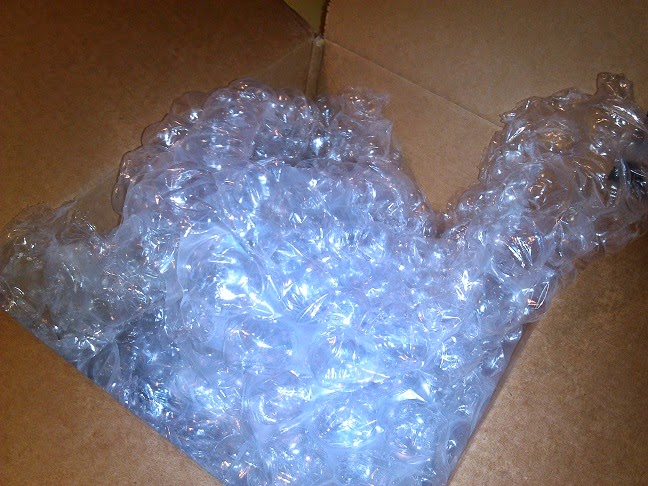 Wow! Perfect!  I need the bubble-wrap right now!  All those bubbles to protect this fabulous original artwork by Kaiser the Great!  A very awesome sketch of Paws with Lou Seal, the Giants mascot. Lou Seal is a call back to the minor league San Francisco Seals, 1903-1957.  His head weighs 25 pounds! 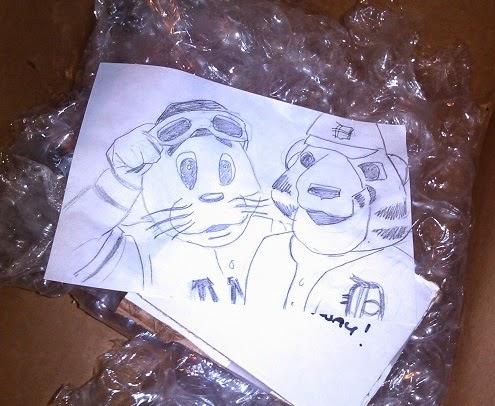 While the box wasn't 25 pounds, it wasn't feather weight either.  I dug a bit more and found this: 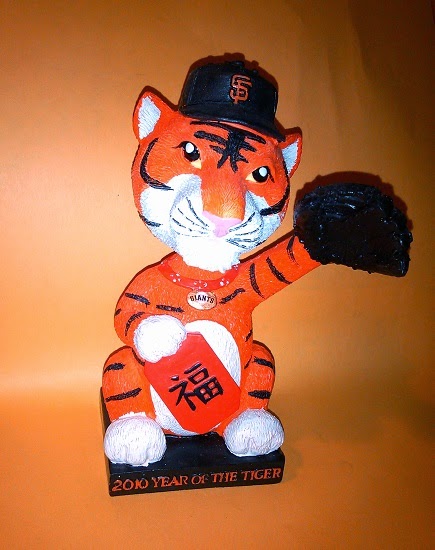 Mike thought he'd collect bobbleheads but decided they take up a lot of space, are expensive and most likenesses aren't very good!  A probable Chinese Heritage Night giveaway, Paws did not defect his team.  I will proudly display this next to my only other bobbleheads: Rowdy Redhawk and the Grinch, both packed or a picture would be shared. 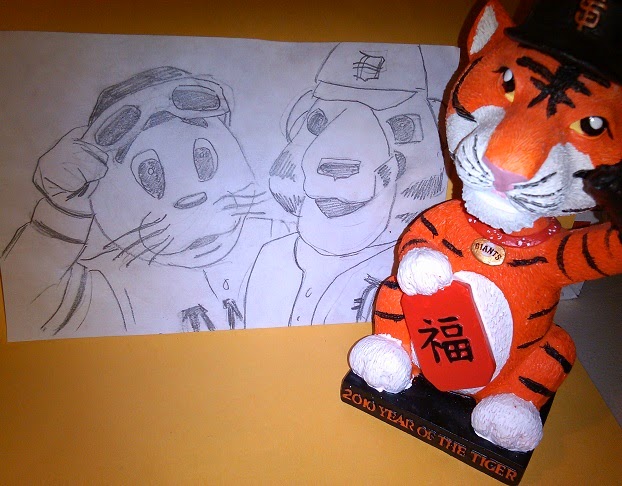 Gavin and Mike, thank you!  2001 Archives are great looking additions to my collection, and the Asian Tiger...he can be tamed.
Posted by acrackedbat 21 comments: