A Fashionably Late Thank You to Collating Cardboard Jones

2018 keeps moving along with me running behind, grabbing at coattails. Why has this year been so hard on me? You stink '18!  Back in March, I received a nice package of cardboard from the cardboard jones-ing man himself, Steve Cornell.  Steve is quite active in Twitterland and can also be found on blogging on Wordpress.

There were too many cards for scanning. Selecting a few to share wasn't an easy task. I prefer easy. Not to say I'm lazy but the least I can do...usually means just that.  Catchers dominated the package, adding some unique pieces to my collection.

The handsome and smiling face of Javy Lopez can be seen on these SGAs and BBC Magazine cards. Perfect for my Lopez collection! Lykes was the stadium hot dog supplier; Bryan another meat-maker. 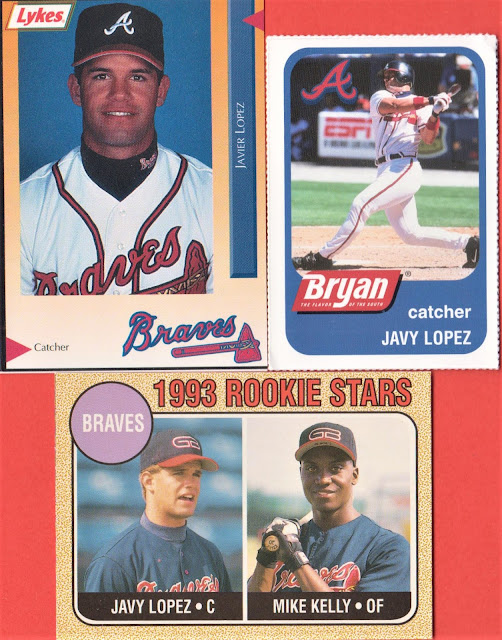 I was big on Flair when it entered the market in 1993. It's still my favorite Flair issue. The rolling waves behind the rookie prospects were beautiful.  1994 wasn't the ocean but a watercolor tie-dyed background which worked for me...and it's always about me. If you forget, I'll remind you. 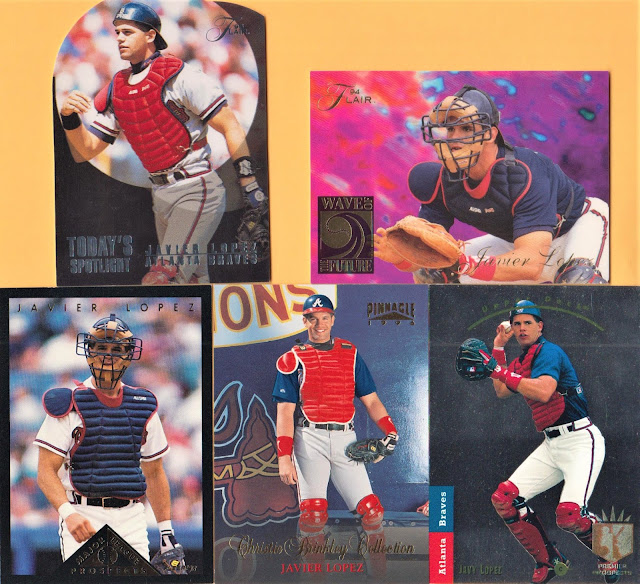 He entered the HOF a Met but Mike will always be a Dodger to me. He was one of my firsts the year I began collecting. We were both Rookies in 1993.


I've grown fond of Panini.  They are logo-deprived through no mistake of their own. Unless you can say not outbidding Topps [aka paying off MLB] for rights, their fault. Golden Age is one of the best products Panini has given us. Behold the bread winner below:

Bread is a breakfast staple but so are cereals. Kelloggs gave us some lenticular goodness throughout the 70s and early 80s. Breakfast hasn't been the same without them.


The tragic life of Ken Caminiti...his last days were sad ones. This is the first relic for my Cam PC! This card is greatly appreciated! I've also tried a few times, to pick up an auto but am always outbid.

Steve, thank you for this package of odd and sensational cards!

I can hear the haters already; those who assume I'm dumping Tony. She must be out of her ever-lovin' mind, they say. Maybe she's cray cray. Too much anesthesia in August.  Oh the judgement you rain down upon me. It's entirely possible I don't have room for all Tony's cards. It's just as likely I have an enormous amount of dupes. You should be ashamed of yourselves.


One of the game's all-time best hitters, Gwynn fits my player collection profile. I love base-stealing hitters. [Though oddly enough, I do NOT collect Rickey Henderson.] Tony was a thief over the first several years of his career. Leg injuries and weight gain took what speed he had away. I never watched the Padres unless they played the Braves or Cubs. Tony was another player I collected because he was good. Wasn't I suppose to collect him?  [If you've read the first three rounds of DDD, you might notice a pattern developing.] 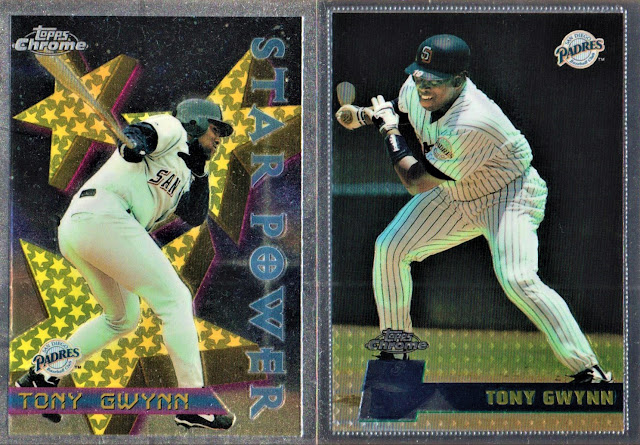 The strike of  '94 ended what may have been the closest attempt to hitting .400 any player will ever have again. The season officially ended on August 12th that year with Tony batting .394!  The question will always remain: could Tony have have hit or surpassed a .400 BA that year?  Ted Williams was the last to do so - in 1941.  Gwynn did have 19 consecutive seasons hitting .300 or better.


So why are these cards up for grabs? Am I cracked? Freeing up space? Shedding dupes?  Only I know the answer.


THE FINE PRINT
Do you want these cards?  If so, you must be a regular reader with a USA mailing address, be the Card Papoy or a regular Canadian reader. No contest hounds. The rules are simple: determine why I’m giving away these cards.  You must comment with a correct response to have a chance via Randomizer.   Your only response choices are:
The next edition of Dupe, Dump or Dwindle will reveal the reason for the removal of these cards from my collection, and our randomized winner.  Remember, only correct responses will be randomized.

Do you need any of these cards?  Leave one of the only three correct responses for a chance to win a stack of Tony Gwynn cardboard.

I'll wait at least a week to close out this edition's commentary with my own response noting the end of this round.