Into the Hall - Mark?

Mark McGwire: his likely destiny - to roam empty halls with Pete Rose.  Perhaps you could offer him refuge on your Christmas Tree or on some other worthy display?  Tis the season of giving!  Please, take it off my hands. Why make me beg? 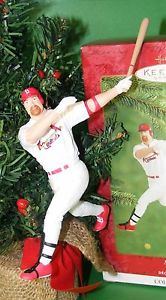 Interested in owning this charming new-in-the-box ornament from 2000 Hallmark Keepsakes?  If you have a US mailing address, comment to share where you'll proudly display Mark this holiday season.  Randomization will take place sometime next Saturday with lucky number five taking home the prize.
Posted by acrackedbat 6 comments:

Infield Fly with a side of Fuji - and the Holiday Claw

It feels so good to be catching up on life!  Even with a week off, I still managed to neglect the blog.  Although I was  tending to several blog-related activities...  I packaged and mailed card stacks to twelve bloggers, with three more going out next week.

I hope you each had a special Thanksgiving Day, spent with friends and/or family - or maybe just a peaceful day at home...or work. Well the possibilities are numerous.  Perhaps I should just share two recent trade packages and pay a visit to the Holiday Claw!

Infield Fly Rule's Adam K. sent a fun package filled with a hundred or so cards, taking care of player collections and those Tiger boys.

Eleven Tiger 2014 Topps Minis were included.  I love the size of these cards!  They simply feel good to hold, touch, caress... 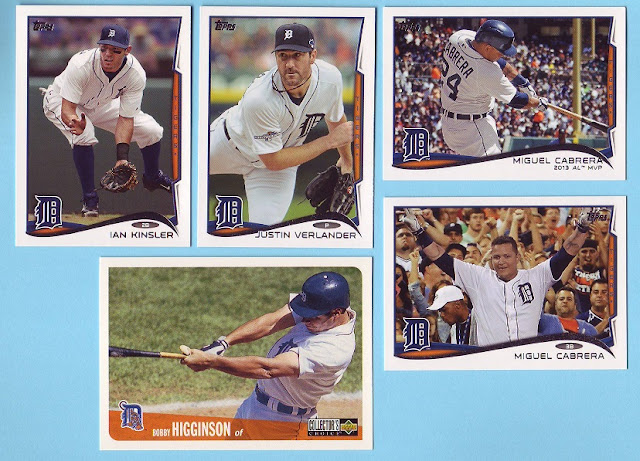 Here are four alongside a full-size 1996 Collector's Choice.

I look at these 1992 Donruss cards scanned against a soft blue background and find myself liking them.  As soon as I turn one over, I realize how lucky I was to begin collecting in 1993!  TMI. 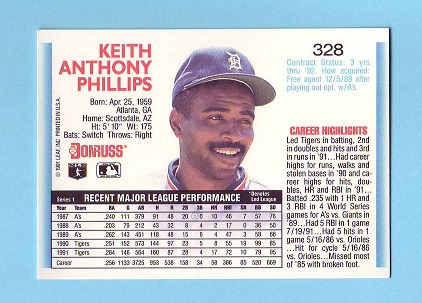 Piazza, Puckett and Ripken.  Kirby, I miss you. 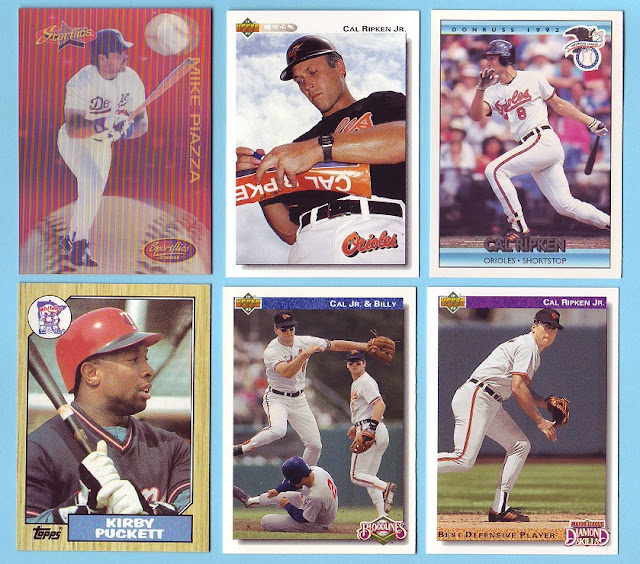 How much money did Triple Play save using a cartoonist?  Thankful though I am to have these cards. I do prefer that others spend their hard earned money on them, even if it's a dime at a time. 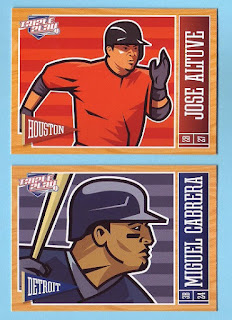 Well Brad.  It's safe to say you got off to a rocky start as manager.  Maybe next year, eh? 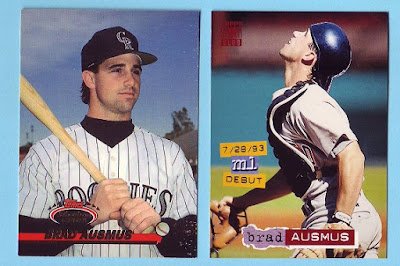 Two great plays from Stadium Club.  Hand on hip, glove on knee, foot flat on bag.  I think you're out son.  Fryman on the fly, another out. 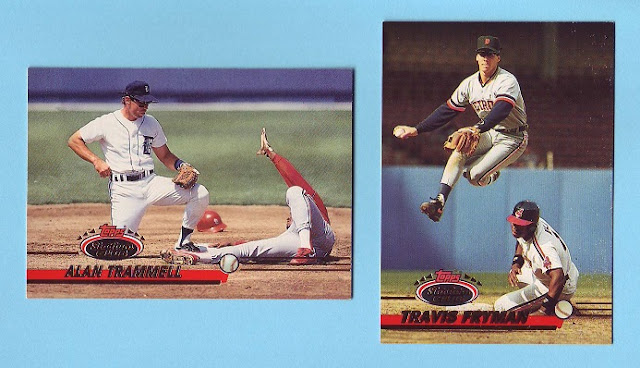 Adam has a knack for seeing more on a card than many of us do.  Me especially. My eyesight isn't the best anyway but I've always been keen on details, or so I thought.  He sees Tigers in places I never thought to check. Safe to say there are no plans in my future for a safari. 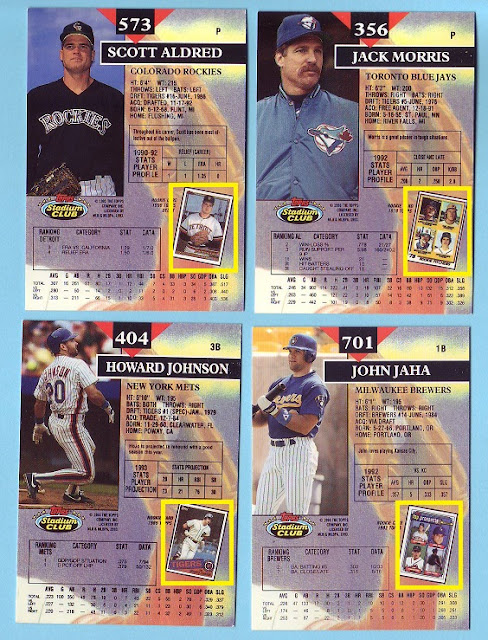 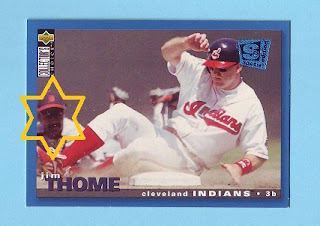 Then there's this one: 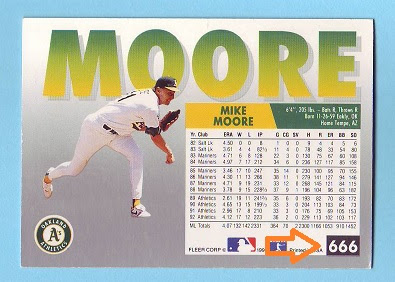 I looked and looked and decided Adam was sending subliminal messages.  I checked the front one last time.  There it was. 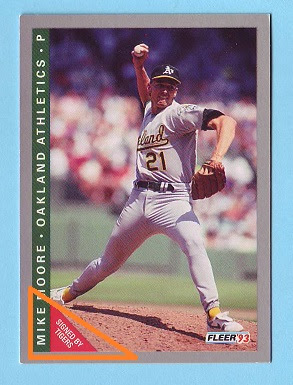 Yep, my thumb was on it the whole time.  Seems The Parrett had a good laugh at my expense. The Chicken points in my direction while he shares the joke with Fielder.   Hey Cecil - that chair's gonna give out on ya.  Yeah, I'll get the last laugh. 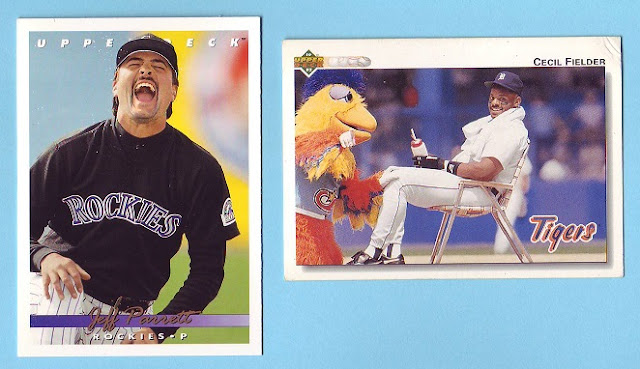 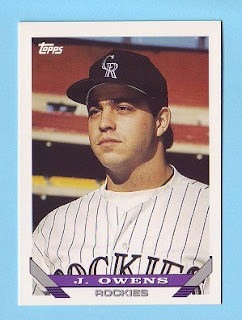 1993 Topps Jayhawk Owens.    J Owens - that is a very cool card indeed.  Bearing no resemblance whatsoever to me, but a keeper!!!

Adam, thank you!  I had fun with these and know we'll do it again!

The Chronicles of Fuji sent four top-loaded cards of Victor Martinez in his Indian head-dressing. While I enjoy Vic as a Tiger, cards from his Cleveland days are my favorites.  I missed his playing years there completely as they began at the time I stopped collecting.

A couple of weeks ago, I shared my thoughts regarding 2015 Topps Update, with its ridiculously large base set and barf back selections.   I should've waited to purchase any of this product.  Waited until Update WITH Chrome was on the shelves. Known for my patience, I rushed over to Target swerving only once to miss a pedestrian.  In the throes of excitement, I still remembered to yield at the crosswalk.  There were FOUR boxes on the shelf, so I purchased them all saving another collector the trouble of waiting in a long check-out line. 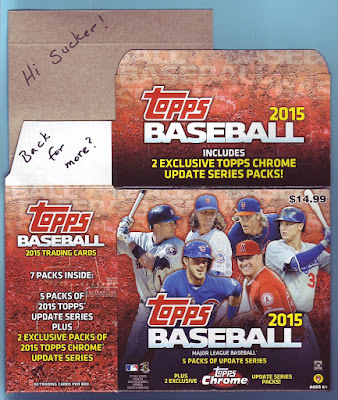 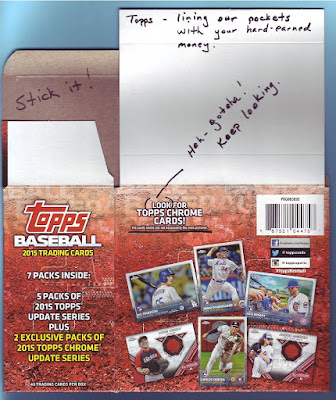 ﻿
﻿
The first box held nothing extraordinary. Update base left me with a yawn, but oh those Chromium boys were looking handsome in their sparkly coating.  Second box. Hey didn't I just open this box? As the ripping continued, my disappointment grew.  I realize the Chrome set is small but four boxes should yield a little variety. Behold the dupes... 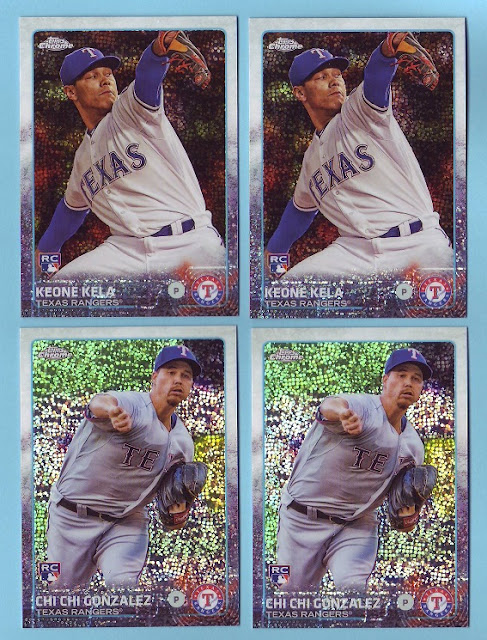 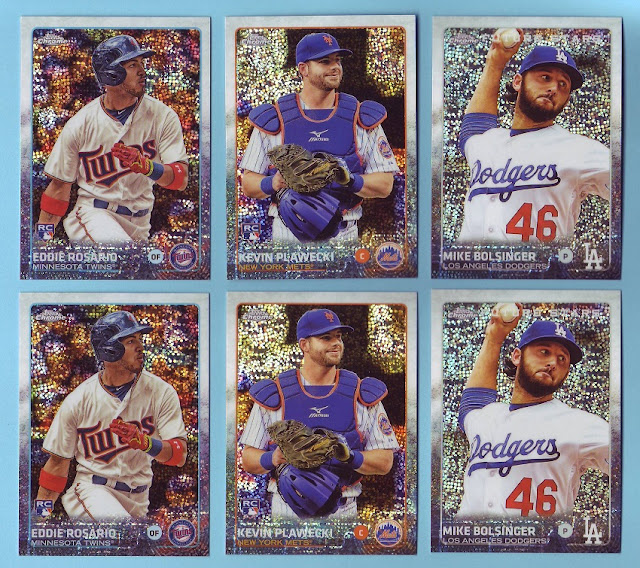 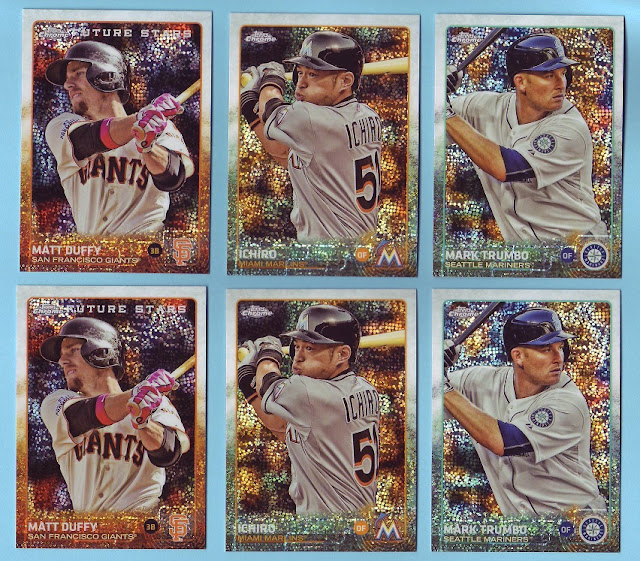 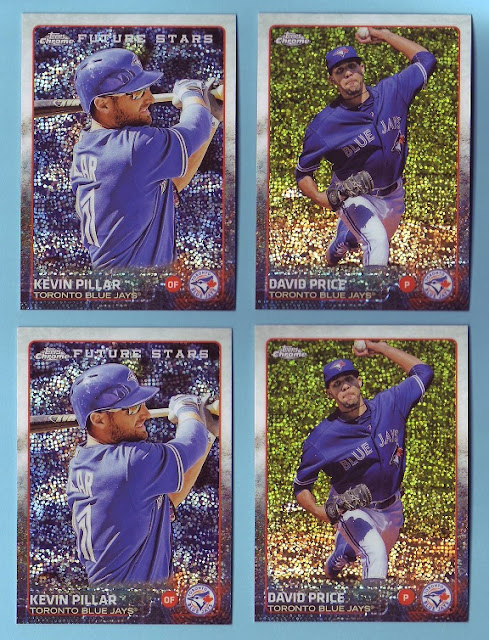 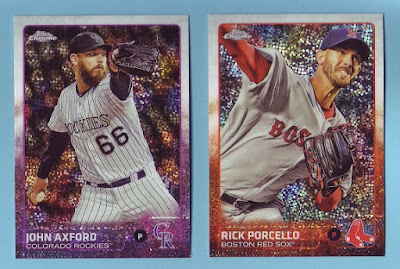 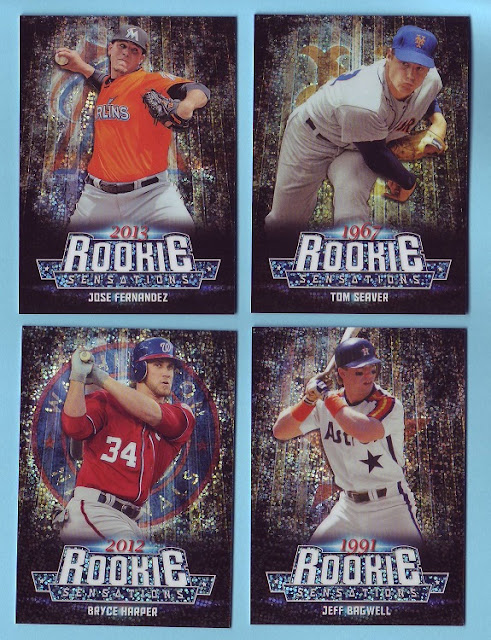 Of these four, Jose Fernandez is available for trade. 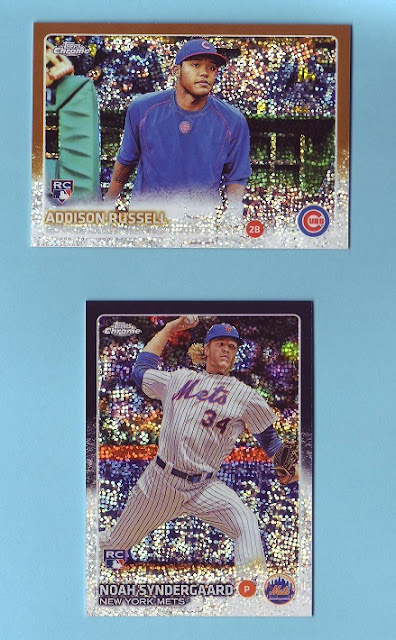 Russell/250 goes to my growing Cubbie Rookie collection .  Noah/99 is moving on to COMC.  He lost my respect throwing at Escobar's head in the World Series.  There is no excuse for throwing at someone's head E-V-E-R!
I feel like a sucker right now.  I gave Update a second chance, hoping to become more than just acquaintances. Chrome scammed me, the Pick-Pocket.  No more box purchases til 2016.  Done for now, thanks to you Topps.  I vow now: I will not purchase another box of Update again, no matter the year. Never.
Football season is coming...then perhaps I'll get a laugh in.  No logos, no team names.  See how you like it Big Boy.  I'll be cuddled up on the sofa, holding Panini's hand in mine, looking forward to our bright future together.
Posted by acrackedbat 21 comments:

I was rather puny over the weekend which kept me from announcing the winner of the highly desirable Mark Teixeira bobble-head dolly. After taking time to randomize, there was no energy to write up a post.  There were four entries, randomized four times. Xavier Higgins is the new owner! 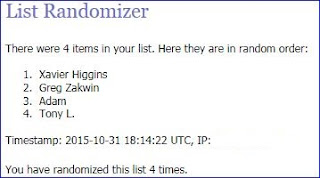 Congrats to you! Send your mailing address to: acrackedbat at gmail dotcom. Once I have your address, Mark will be dropped headfirst into the first outgoing mail receptacle I can find.  Of course, he will be properly packaged.  I'm just happy to see him moving out!

Feeling better yesterday, I opened one of the two Heritage 51 boxes/sets which my best friend, Rural Postal Delivery Person, crammed into my roadside mail depository.  The rather small but attractively designed box contained a complete set of  104 base cards, 21 minis and one autographed card.
Basic cards have blue or red backs: 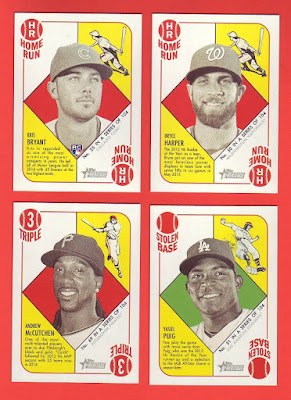 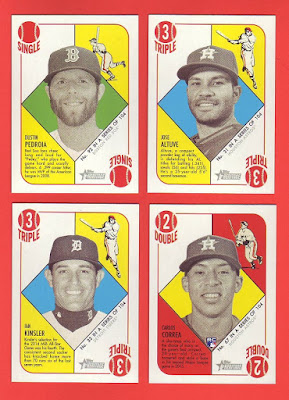 
These minis are expected to find new homes; already nestled into their little team stacks.  I'm on the fence with this design.  The cardstock is Heritage quality.  I would've preferred rounded corners as on the original 51 red and blue back designs.

Before the auto is revealed, let me just say - no.  I hate to disappoint any of my friends with the news but this card isn't for trade.  Will I keep it?  Doubtful.  I rarely sell autos but this one will probably be headed to COMC.  It's nice to pull a card which will fund a few purchases.  As far as the second box is concerned, well...I'm holding off on breaking the seal.  Topps advertised these cards as a limited production.  Topps throws this word around quite loosely so who really knows how many sets were produced.  If I put it away, out-of-sight then I'll likely forget about it.

This rather attractive auto is on-card and a blue-back, numbered out of  25: 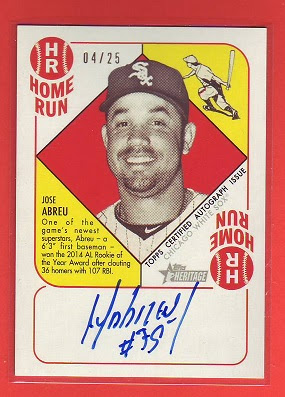 That's a pretty nice card!  Correa, Bryant, Trout or Posey and it would've been a keeper!

Thanks for stopping by!  New giveaway coming soon.  Drop by to see what the Claw chooses... next time! 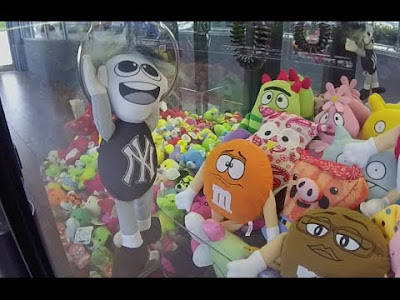