3D ROUND FOUR WRAP with a Visit from Krukberry

Who wins the Gwynns? Round four of Dupe, Dump or Dwindle featured cards from my diminishing collection of this HOFer. Diminishing is not to say dumping.  I'll be honest, and not because my posts are usually filled with atrocious lies because that just isn't true.

Going over my collection, I initially considered dumping him. Gwynn is greatly deserving of recognition but one day may be relegated to a binder page which I'd consider a dump. I simply was not ready to dump him. It felt wrong. It also felt silly to feel wrong about dumping him, even a touch guilty. Perhaps that has do with his premature death. I seem to enjoy collecting mostly the deceased and elderly.

A new commenter, Trevor of Bump and Run Football Card Blog was the only one to guess DUMP. I was actually glad to see this guess because one day it will be correct. I do have some good names hitting the dump pile; small PC collections started but never pursued.

This 3D round was a dwindle. I kept 50 Gwynns, with the remainder going to a new home. We had four correct guesses before comments were closed. These fine gentleman are:  reader Fred Pike, Dimebox Nick, defgav and Jafronius.

Before the winner is revealed - of course you won't jump ahead, will you? - I have a late trade flash. I found a nice little scan buried in my email FROM JANUARY!! Oh the shame. Mr. Peter Steinberg of Baseball Every Night, All the Freakin' Time sent a nice little envelope of Heritage from my wantlist and included A DEAD GUY! See, Steiny knows me!


My dearest Krukberry, thanks for keeping me as a trade pal. I'm addled - er - grateful!

I've kept you waiting long enough, nearly three weeks actually! Our good friends at Random.org have made a decision on my behalf. Four correct comments mean four times around - and away we go! 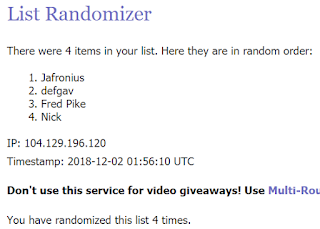 Jafronius! Jafronius, as long as the link on your blog is correct you'll receive an email from me. If you don't want these cards then Tony goes to defgav.

The next round of Dupe, Dump or Dwindle will feature one of the Bash Brothers.