I intended to share this post over two weeks ago. BWTP's recent departure has me reexamining my own reasons for being here. My second round of 'busy seasons' is rapidly approaching at the tax firm that provides my living.  Around the first of September through mid-October, I tend to disappear from the blogs altogether.  I was fortunate to transfer from Dallas with my employer three years ago. I'm now beginning to resent the amount of time a regular work day and its commute are consuming.  Changes in management have added to the increasing levels of stress in the office.  I find myself at a crossroads, needing to work for a few more years. The challenge in finding a new position at my age cannot be underestimated.  Any new job must include a shorter commute.  I live in the country...  All I know for certain is that my current career path is nearing its end. I simply cannot take it much longer.  I should be sleeping at 4am instead of writing about how much I dread going into the office.

Reading your blogs and sharing on mine are therapeutic for me.  It's beyond frustrating when I can't find enough time to be here. Simply put, it makes me sad. Life has its responsibilities for each of us, of course.  No one needs to tell me 'suck it up, Buttercup.'   If you do read regularly then perhaps you've noticed I don't share my personal challenges often.  This situation is weighing on me heavily. I may be absent in streaks of weeks but am not going away.

Jeff Brown Paper Bagwell.  I hated - still hate - this nickname. I was never a fan of ESPN's Chris Berman anyway which probably added to my dislike. Along with Chipper, Jeff is a recent HOF inductee.  Many baseball fans will associate him with the steroid era, slapping their own * by his name.  Rafael Palmeiro, Sammy Sosa and Mark McGwire were evicted from my collection long ago.  I never collected Barry Bonds.

Jeff was the first Astro I pc'd. Though I can't say why I began keeping his cards, it was likely the uniform.  I also had some crazy notion that all Rookie of the Year winners were worth pursuing.  Some may recall I began collecting in 93.  The history of failed Rookie winners was unknown to me then. Many would argue I still know little but I digress. As time passed, I learned he was a dependable hitter - homers yes - but on base often, stealing well over 200 bags in his career. Okay, 202.  I couldn't resist the opportunity. Perhaps Berman deserves a little slack. 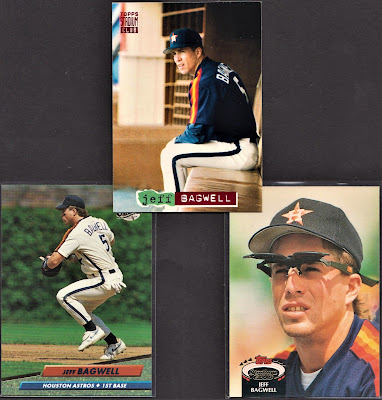 Although drafted by the Red Sox, he spent his entire MLB career with the Astros. In 1994, Jeff made  the first of his four All Star appearances.  During this strike shortened season, he won a Gold Glove, Silver Slugger and the NL MVP.  For six  years, 1996-2001, Baggypants had at least 30 homers, 100 RBI, 100 runs scored and 100 walks in each year becoming the only player in MLB history to do so. Jeffrey concluded a 15 year career with a .297 average, 2314 hits, 449 round-trippers and 1529 runs batted in.

One of my favorite baseball memories was a trip to the Astrodome in September 1998.  I hadn't yet moved to Texas so was unaccustomed to 6 point beer. Heck, I really didn't drink at all. I found a stand with 24 ounce draft beers for $2!  One would have been enough but I had at least two...possibly more.  I wasn't too drunk because I remember this day well.  The Astros were playing the Reds. I do recall fake flowers hanging on the outfield wall. So odd.  With 217 homeruns, Jeff had the longest active streak in baseball without a grand slam.  Sitting on the first base side, I was there when it happened.  With a long swing, he unloaded the bases and the Reds went on to lose 13-7. What a rush!  It was the first grand slam I'd ever witnessed in person. Also the first time I ever wore balloons on my head - publicly. My head felt like one the next morning.

Why is Jeff the headliner for our third round of Triple Ds?  As in the previous two posts, not every card on the move is scanned and shared here.  Is he getting the boot? What say you?

THE FINE PRINT
Do you want these cards?  If so, you must be a regular reader with a USA mailing address, be the Card Papoy or a regular Canadian reader. No contest hounds. The rules are simple: determine why I’m giving away these cards.  You must comment with a correct response to have a chance via Randomizer.   Your only response choices are:
The next edition of Dupe, Dump or Dwindle will reveal the reason for the removal of these cards from my collection, and our randomized winner.  Remember, only correct responses will be randomized.

The twist?  You can win only ONCE every three rounds.  Cards that go unclaimed won’t be offered here again. There will be many players listed in the coming weeks but you have no way to know who’s up next. Do you need any of these cards?  Leave one of the only three correct responses for a chance to win a stack of Jeff's cards - or pass.

I'll wait at least a week to close out this edition's commentary with my own response noting the end of this round.

Chipper didn't drum up much interest. Of the responses, there were four dwindles, four dumps and no dupes.  Baseball Cards Come To Life author Bo commented: Not entering this one either. If you're dumping Donnie you've got to be dumping this guy too, right? Especially as you didn't really say anything nice about him in your writeup.   I did mention in the first 3D post that some choices may be surprising.  My decision to feature a player here has no bearing on his career or personal history outside the game.  Tiger Pride left this: Passing on the entry for your contest (great way to have one btw) but I'm going to go with "dwindle"...because who takes two dumps in a row?! - a comment that left me rolling!

No one guessed DUPE. There are double dupes in the lot of Jones cards. Scanning the dupes would have given this one away.  Chipper hits the discard pile.

More players ahead. Thanks for reading!
Posted by acrackedbat 30 comments: