FREE BASEBALL CARDS!  Is it really as simple as connecting with other collectors who are more than willing to share their spoils?  While surfing for baseball card info a few months ago, I stumbled upon the Night Owl blog .  One post read led to the next - which led to other card blogs and before I knew it a couple of entertaining hours had passed.  I was quite intrigued with so many trade posts sharing the day’s loot.

Tony of Off-hiatus initiated my second trade.  He emailed regarding my stash of 90s baseball cards.  Tony was more than willing to free up space in the box for new cards.  I was all-too- happy to accommodate!  Brewers for Tony meant Tigers for me!  When the bounty arrived, it came in two packages. Tony completed my Tigers Topps sets for 2007, 2012 and 2013 and 2008 Upper Deck!   He also included Tigers from the first Topps Total set in 2002.  (My first and only attempt at a Frankenset! Hmmm, maybe that had something to do with leaving the hobby for a while.)

I'd originally written a bit about most of the cards I'm sharing in this post.  I've learned the hard way to save my work continuously but yesterday this failed too. I can say though, all of these cards are new to my collection!  What a great selection of cards!  Let's start with Alan Trammell:


Trammell spent all his career with the Tigers. He is still HOF eligible, continuing to make the ballot every year.  He was the 1984 WS MVP, a six time All-Star and four time Gold Glove winner.  Trammell has a lifetime average of .285 with 185 home runs and 2365 hits.

Prince Fielder - ever see him attempt a head-in slide into first base?  I did. It wasn't pretty.  Well ok, it was - pretty laughable. No doubt he's lovin' Texas BBQ these days.  Here are three very attractive versions of  2012 Bowman Platinum: ruby, emerald and base.

I began having trouble maintaining a healthy waistline in 1993. My metabolism has always been a bit low which added to the struggle.  I continued with regular activity and exercise but my diet began changing ever-so-slowly. As a very green collector, I had no idea cards could be found in grocery stores; hidden in cereal boxes, frozen foods and...sausage? 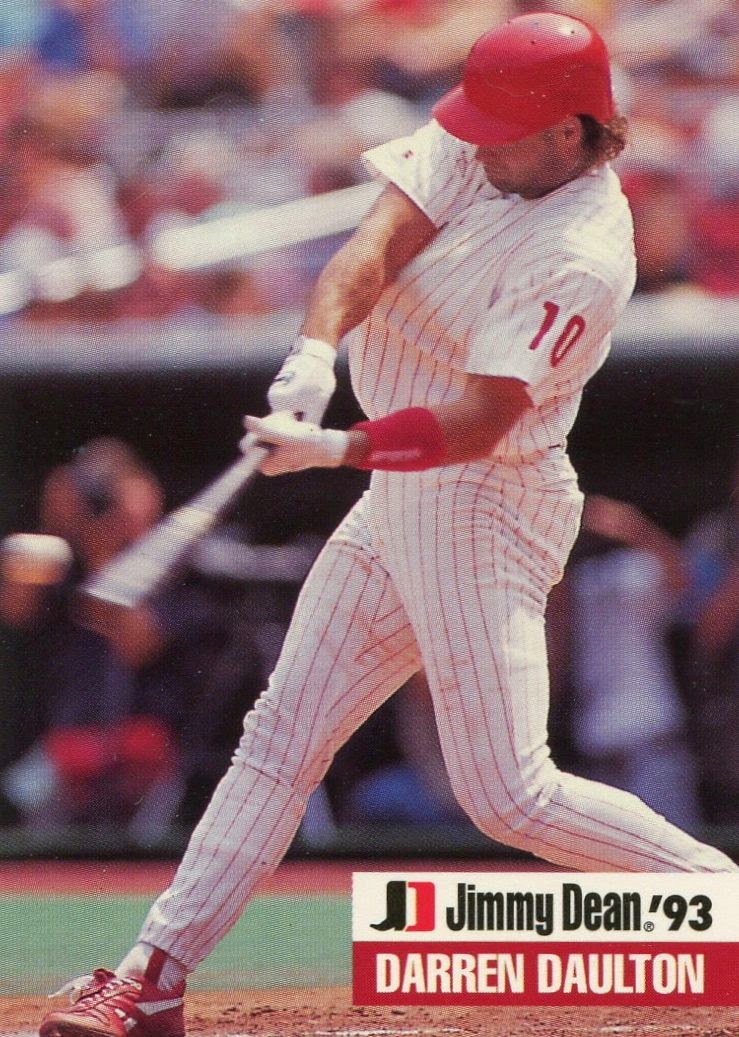 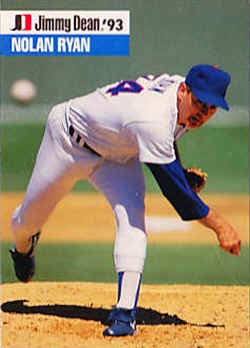 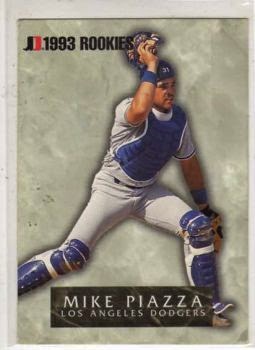 I stumbled upon these quite by accident, during a rare sausage purchase. Produced by MSA for Jimmy Dean and distributed in 3-card packs, right into the meat section of the local grocer.  This collecting newbie was excited to find my beloved Darren Daulton in a sausage roll!  He naturally belonged in a meat product!  It never occurred to me there might be a complete set.  I didn't care!  I purchased enough sausage over a short period of time to claim the extra ten cards via UPC redemption. Having eaten too much sausage, I certainly wouldn't be hungry for it anytime soon - if ever!  Breakfast meat behind me, I could breathe a bit easier while doing the weekly shopping.

I'd scribbled Red Baron frozen pizza on my grocery list. Reaching for my cheesy Red Baron, I noticed the Tombstone branded pizza.  I almost got away without creating another cycle of over-eating. Having the myopic vision of Mr. Magoo, how I noticed the baseball card on the Tombstone box is a mystery.

1994:
Also produced by MSA (a company who
obviously has issues with my waistline) in a
30 card set.  Only five pizza proof-of-purchase
logos required to complete the set, I returned to
buy four more. Done.  Tombstone was a decent
frozen pizza back in the day.


When does it end????  Seriously, can't a girl have fried chicken without Church's waving their cards in my face?  I eat fried chicken maybe twice a year.  It quickly became the Chicken-Fried Summer of  1994. Church's Hometown Stars, a product of Pinnacle brand was issued in four card packs. Lucky me, additional packs could be purchased for .69 each.  A 28 card set wasn't enough for Pinnacle.  One of the four cards was gold foil stamped.
Pinnacle didn't forget the insert chase!  Using their Dufex technology, the 10 card set Show Stoppers was inserted one in every fourth pack. 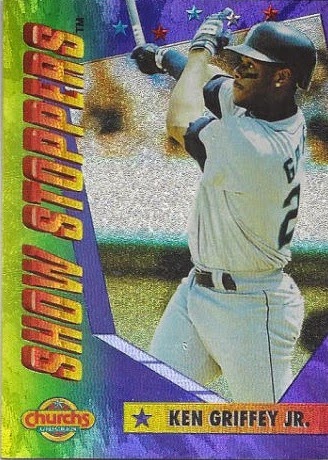 These are still favorites of mine, some of the most colorful cards I've seen.  When I'd finally completed the insert set, I also had countless base sets and two complete gold sets. Man I ate a lot of chicken that year!

I love all beef hot dogs but sometimes crave a coney from a (then local) favorite.
I couldn't even have a hot dog from the safety of my own car.  In 1995, Sonic picked up where Church's left off...  For a combo meal purchase, I received a 3-card pack of Sonic Upper Deck Heroes of Baseball.  Twenty cards total, players in sepia tones and card trimmed in red, white and blue: 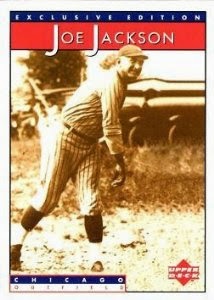 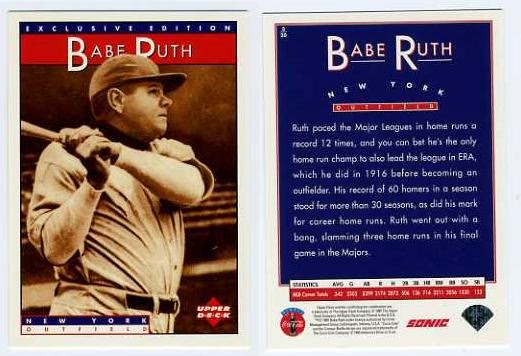 Still barely two years into collecting, this set was my introduction to true heroes of the game.  I knew  Babe Ruth but little of Paige, Kaline, Hodges, Minoso and the 15 other players (new and old) featured in this set. A nice set, simply designed and difficult to complete - I ate a lot of hot dogs that Summer!

1996 came and so did the 1996 Denny's Holograms.  I didn't realize Denny's had issued sets since 1991. With the recent introduction of holograms to sportscards, this year's set of 28 were expected to be their most popular release.  Of course, included was a ten card Grand Slam insert set - and Artists Proofs of these lovely inserts. With your meal order, two packs could be purchased. 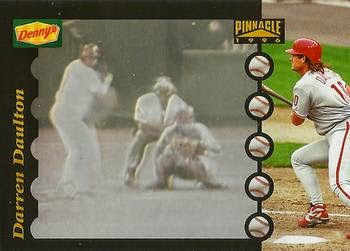 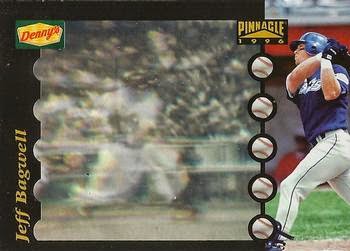 My collecting friend and I worked nights and shared days off, so we went to Denny's around 2am twice a week for a month or so. The first night our waitress Cindy gave us a couple extra packs.  We'd chatted it up with her, having planned to befriend the lucky waitstaff assigned to our table. We left a $10 tip for pancake meals and planned to return the next night.  Cindy practically met us at the door. Each time she came by to check on us, she'd slip a few packs on the table. We found out a bit more about her too: single mom working two jobs to make it.  Well...she may have been working us too because we left another nice tip of $20.  For the next couple of weeks, she'd bring handfuls of packs to the table, dumping them from her apron.  My friend and I opened easily over 100 packs of those cards.  Never did we find one single insert.  Lots and lots of base cards....

Those are some fun collecting memories! Pounds collected then have been shed and gained, and shed and gained.  It's too bad though for today's collectors since the days of finding cards in cereal or pizza etc. are long gone.  I know there are a few rarities around, such as Mother's Cookies. Still I'm better off.  I clearly have serious food issues! 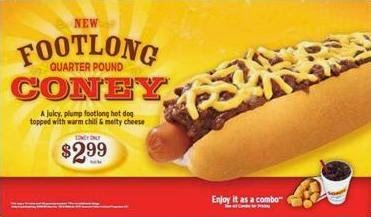 This is exciting for me!  I get such a kick outta sharing cards.  Recently I've taken to giving away handfuls of extras to young collectors.  (Well, they collect now anyway.) At four and six years of age, it's hard to have extra pocket money.  When they're ten, I doubt the hobby will be any more affordable for them.   But I digress... 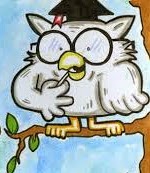 The blogosphere's beloved Night Owl  (humble Dodgers fan and conveyer of  much wisdom) sent a sweet little package this past week.  I was fortunate to receive this gift before he began his traditional August hiatus.   Not always knowing what he wants or sometimes needs, Greg relies on his blog network to aid in set completion.  Earlier this Summer, I sent a care package to Greg. We are all busy people.  Taking time for a stranger speaks volumes, to me anyway.  Thanks N.O.!!!

In sharing these little prizes with you, please note I am new with this whole scanning thing.  I'm giving it a try in lieu of photos, as a time saver.  (At least it was suppose to save time.  Not working out that way.) 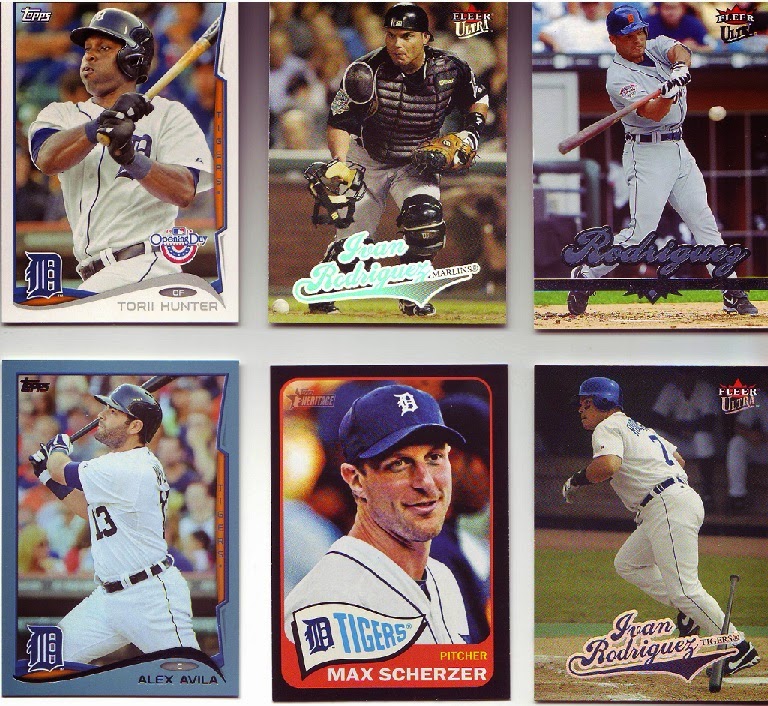 You may have already determined I'm a Tigers fan. If not, please take a moment to view this blog's background design.  I'll wait...

I do not live in Michigan - yet.  I was a local Rangers' fan for many years. Not a club with deep roots, I held on hoping to watch the team make history.  Year after year, one poor decision after another - Arod? - I allowed my loyalty to drift and became a player collector.  When Ivan left the club, I kept up  with him.  To see him in a Tiger uniform is more than sweet!  Pudge may have been 'roid tainted (hopefully by association only) but he still had one of the greatest arms  ever found on a backstop!  What Rangers fan didn't love seeing him make an out with a throw to the base, or a hard tag at the plate?  Ivan is still one of my faves.  I did not have any of the six cards shown. 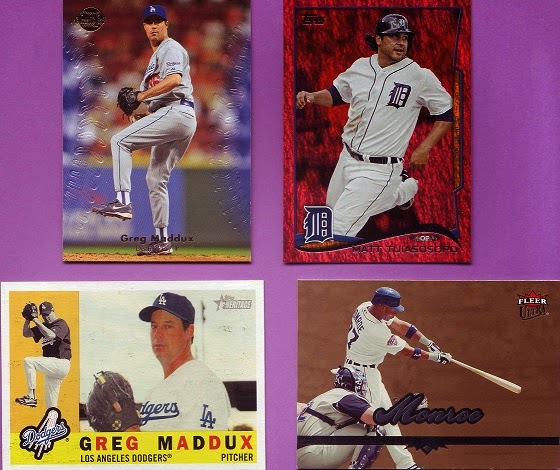 Greg Maddux is the first pitcher I ever followed.  Thanks to TBS, I was able to watch a few games a week.  The 90's Braves had a phenomenal pitching staff. Glavine, Smoltz and Maddux were hard to beat, as long as the bats were producing.  Many a fan spent 7-9 frustrated innings waiting for the tie-breaking run to cross the plate for a Braves win. I did not have any cards showing Maddux in Dodger blue, nor did I have Tuiasosopo and Monroe.  Monroe was a fan friendly fellow. He signed a ball for me back in his AAA days. 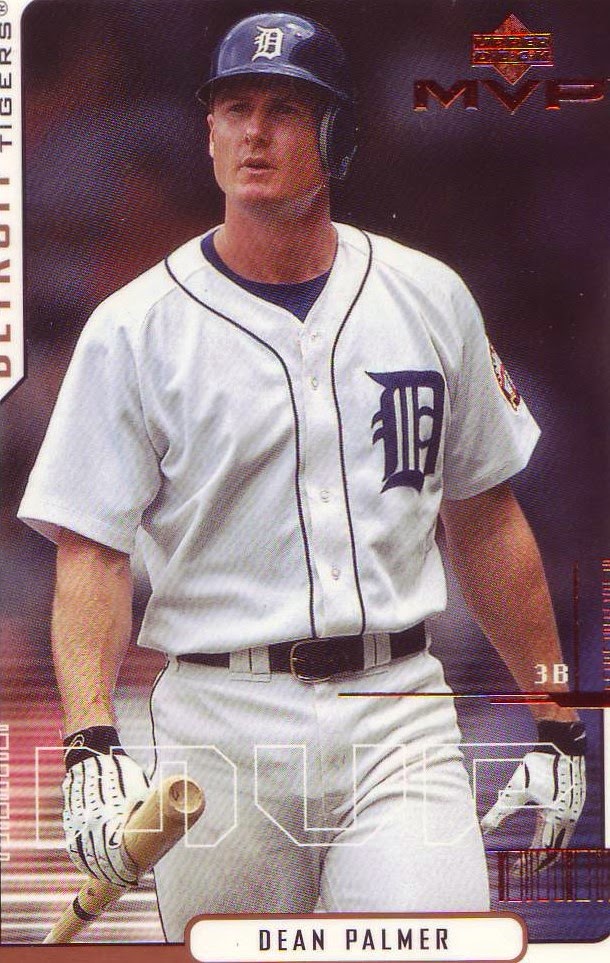 Dean looking sharp in Tiger duds.
I remember Dean from his days with the OKC 89ers.  He was plagued with injuries throughout his 14 year career. Not the best defensively, Dean had some pop in his bat and a .251 career average.  He's the assistant coach at Lincoln High School in Tallahassee according to the always reliable Wikipedia. This card is a nice addition to my Tigers collection. 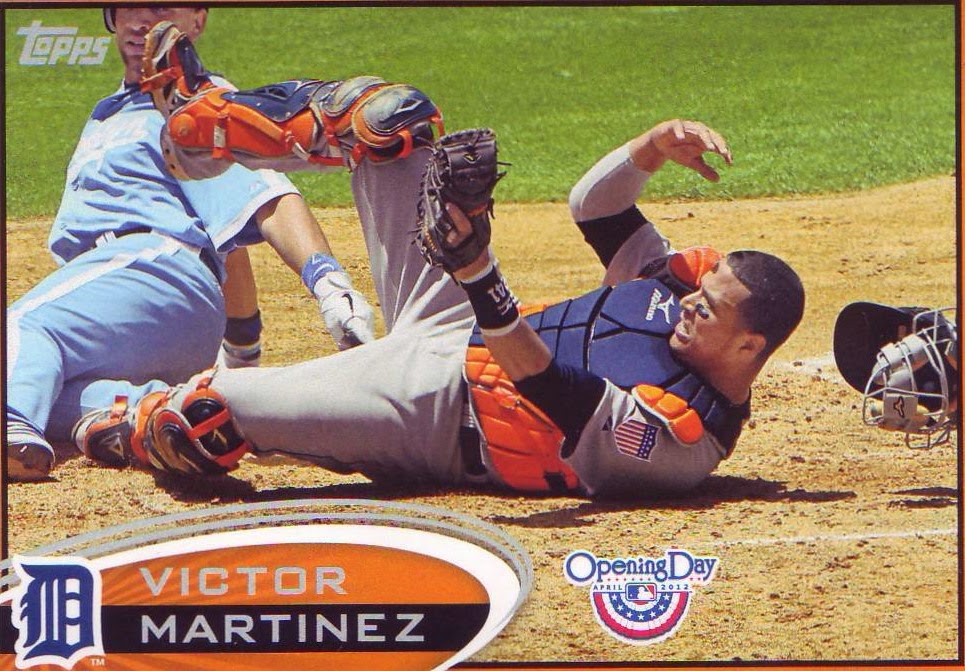 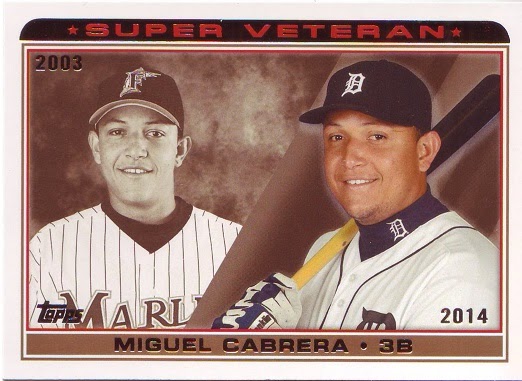 ﻿
I quit collecting when these two young men came onto the scene - most unfortunately, as their nicer RCs are a bit pricey.  Victor's most collectable issue is from 2001 Donruss Class of 2001 and numbered of 625. I must have picked up a pack of these because I have the Hafner RC.  I wish I'd had the opportunity to watch Martinez behind the plate but happy enough to see him as DH.  Cabrera - wow he looks all grown up!  Was he even 16 in that Marlin uniform?  I hope he has a few good years left in him, contract aside.  I'm paying attention now. Miggy is a great hitter.  His career average is currently around .320.   Both cards were needed. 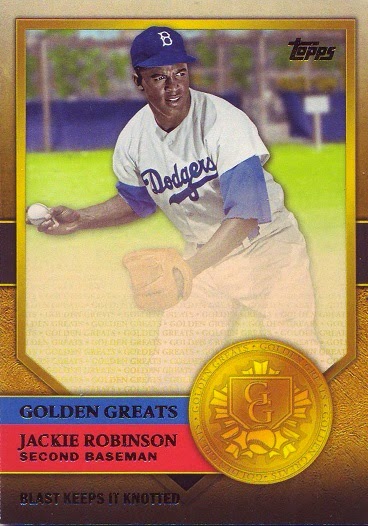 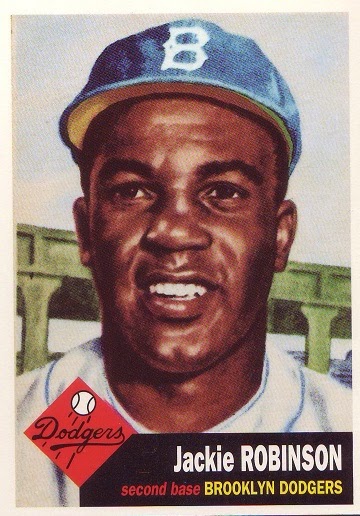 I can add absolutely zero to all already written regarding this incredibly courageous  man's story.
Love these cards - and also needed both!
﻿﻿﻿﻿﻿﻿﻿﻿﻿

﻿
﻿
﻿
﻿
This photo was not trimmed, nor is the card missing 3/4 of its borders.  The little Canon scanner that could, made the decision repeatedly shave off the edges of this card. Scanning 101 - course not completed.  Dave is a familiar face.  Les Cain is collecting $111 monthly from the Tigers for the remainder of his life.  I hope this amount has been adjusted for inflation, but likely not. I hope Les has had a good life.  I couldn't find information on any other career changes. Great card and a fave from the batch - needed.
The two remaining cards from N.O. were also needed and more than welcomed into my collection. While all have been great additions, these are by far the sweetest! 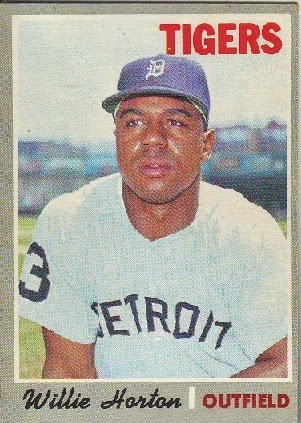 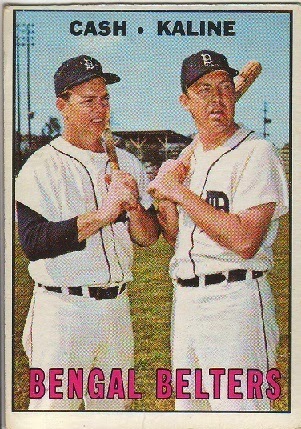 The three fine gentlemen pictured here were playing World Series ball when I was toddling around the house. As I get to know my Tigers, these fellows are becoming new favorites.
Classic baseball cards!  What a fun first trade!  Who's next?