Last week, I shared a dirty little secret.  I'm a card hoarder.  Ok, maybe it's not hoarding and perhaps not so dirty but to deal with my little fort of cardboard boxes,  I needed to put it out in the open for all to see.

I had a couple days off work this week and used them accordingly.  Last week I shared this photo: 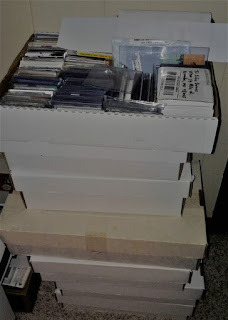 Not very pretty.  I chose to attack this stack of boxes first because [a] these are in my study which must be reclaimed and [b] it's the smallest stack.   With so many cards to organize, resorting is unavoidable.  And the sleeving!  I've gone through a thousand soft sleeves already!!  Fortunately the Tigers are already sorted out and mostly organized. 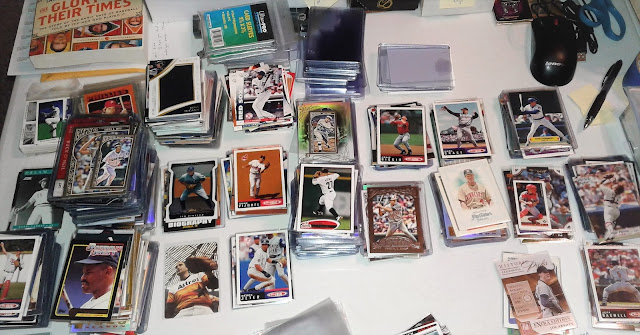 I began stacking cards in player lots.  There isn't room for all the PCs so I gave table space to the fellas showing the most often: Ty Cobb, Altuve,  Grace, Sandberg, Biggio, Molitor, Bagwell, Piazza, Abbott, Kinsler, Vizquel, Jeter, Pudge Rodriguez, Ripken and Nolan Ryan - Astro.   The tall stack top row,  third from the left with the fat patch on top is a trade pile.  To the right of the patch is a discard pile.

Short stacks to the left of the patch are cards for misc sets I'm working to build.  I have two stacks for HOFers and retired players.   The pile for my fun binders features a Cecil Fielder McDonalds card.   As the stacks grow, the cards are moved into now empty boxes.  These will be staged here until they join the PCs already created and stored in the closet. 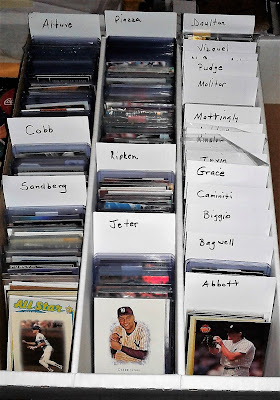 HOFers and retired players are resting in this lid until I have a monster box empty for them.  I expect there will be 4000-5000 of these fellas by the time the initial sorting is complete.  Guys like Banks, Ruth, Gehrig, Cochrane, Campy, Bench, Yount - the list is long - all will be moved into their PCs.  The left side of the photo shows staging for RCs and active players such as Posey and Trout. Next to them is a spot for sets. 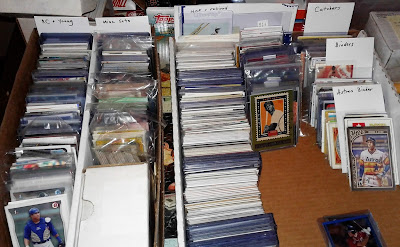 I'm also using a lid to gather cards for future trades!  Yes, there is a no-trade clause in effect.  It's more of a mercy rule to allow time to organize and regroup.  I sent many packages out over a week ago.  Now that the sorting's begun, all the nice cards I'd collected to share are turning up. These will make for some fun packages later: patches, autos, lesser seen cards of the 90s like Topps Laser. 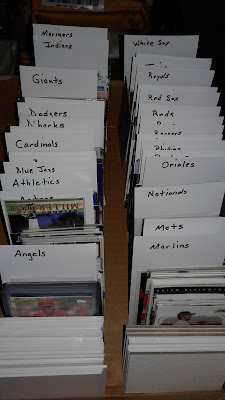 I've missed out on the fun part of our hobby for some time.  I had no trouble accumulating the cards. It's always a thrill to find the hold-out, a card you've been looking for over the many years.  Then the question becomes, what did I do with it???

I am excited to share my progress - and some nice cards - along the way.  I plan to trim my PCs down.  Hunter Pence didn't take the news well.  He's found a good home though,  such a sensitive fellow. 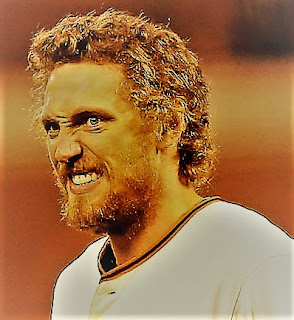 There will be unavoidable player dupes which may find their way into a contest.  I'm already considering a giveaway box full of discards.  Who doesn't like to go through another collector's junk?

New releases are on the way with Topps out any moment. I'm not sure how many of us like the new design.  It doesn't appeal to me really but Topps knows we need a pack fix.  It will sell anyway. I purchased two hobby jumbo boxes [ten 50 card packs] which come with silver packs exclusive to hobby box purchases. These packs contain chrome cards in the style of 87 Topps, probably one of my least favorite sets. There's a chance to pull Altuve in base/parallel/auto which means someone else will likely find my Jose in their packs.  2017 Topps - another thousand cards to sort!
Posted by acrackedbat 23 comments: 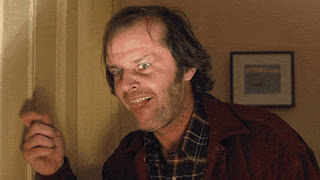 Many months have passed since last posting. I never thought my absence would be so extended.  I can't begin to say how much I've missed you guys!   I haven’t read more than a handful of posts since March or opened my email in almost as long.  Initially, work kept me from being here which wasn't unusual for March and April but soon summer was filled with overtime right into the fall and holidays.  During this time, trade packages kept coming.  I had a stack of at least 20 by the end of August.  This just added to my shame and frankly I felt quite intimidated by the sheer amount of cards multiplying like hares. September and October are the busiest months of the year at my office. I had high hopes for November and December but then repeated rounds of illness dashed those plans. 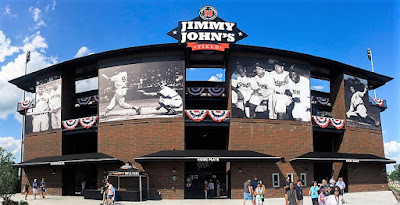 I had to make choices this year with the free time available so spent a good part of it at the new ballpark in my area - Jimmy John's Field.  I'd purchased a season ticket plan the first part of 2016 before realizing work would steal some of my fun.   Having only spent the previous summer here, I hadn't had the opportunity to explore my new world.  That time was for moving, unpacking, improvements and organization.   I'd like to tell you organization was accomplished.  I’d really like to.
I have a room designated for quiet space with my books, desk and a closet for my card collection. This is the only room that has remained unfinished.  In fact, I have several monster boxes plus additional packed boxes of unsorted cards in another room.  Since throwing myself headlong into collecting again, I've managed to accumulate "five-digit" thousands of cards - probably an underestimate.  My collection had always been meticulously sorted.


Of these, the only cards sorted have been Tigers received in our many trades.  None of my player collections and sets are together. More shame.  I haven't had the time to truly enjoy the cards. There is no joy to be found when one has no idea what's owned or needed. 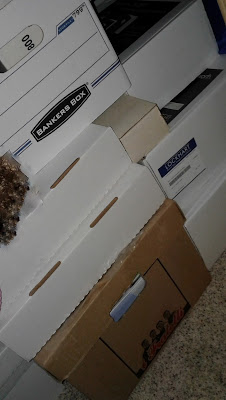 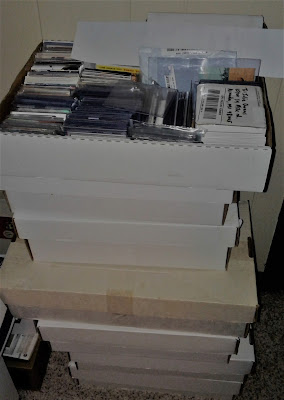 CARD SHAMING:
No idea what's
in these boxes.  All accumulated since 2012.


My goal is to sort all of these cards.  It will probably take most of the year.  Of course, new releases are on the horizon.  I've committed to Flagship Jumbos and a couple boxes of GQ.  More sorting.  There's a card show this weekend.  Such a rare opportunity - should I go?  What's a few more unsorted cards at this point??

Over the past weekend I was able to finish long overdue trade packages. I've been collecting these cards since spring.  I felt a weight of guilt lift from my shoulders when this project was completed. For those of you who have been patiently awaiting a return package, thank you. 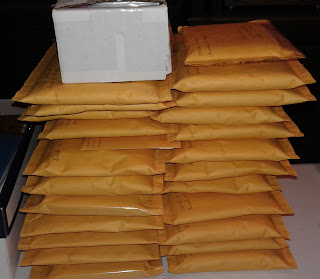 MLB has given us the no-trade clause which allows players to block trades to specific teams.  Ten years of service with five consecutive years on the same team allow a player to veto any trade.   I want to continue our trade relationships but know that I simply can't right now.  To read the many worthy blogs here, to share cards as I am reacquainted with my collection -  something else must go to make time for these moments.   You have all been so generous.  It is a hard thing to ask but please, hold off on sending anything for now.  Your trade packages deserve to be shared and I can't promise the time for doing so.  This is my no-trade clause.   With this in mind, I regretfully submit my resignation from Supertraders.  It isn't right to hold a spot in this ELITE group right now.  I am honored to have been included. 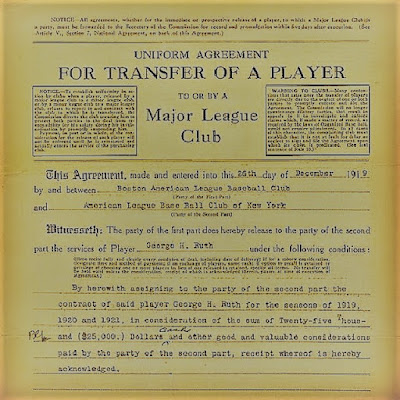 To those of you who sent cards, I will share these over the next few posts.  There were too many cards for scanning once I began to attack the piles.  I grouped these by sender and relied on my phone camera.  Not my usual method but the only one which allows me to thank each of you before another year slips by.

Without doubt, during the nine months spent away from here I’ve missed out on your life events, great cards and new bloggers.  I plan to catch up on my reading and meet a few new folks here.  I am so looking forward to it!