Across the Sea, Off the Wall

Our hobby can take a good bit of time when done well: updating want lists, sharing cards, organizing cards, updating the want list.  When I read of other bloggers behind on their scanning, sharing, sorting and updating, it makes me feel a bit better.  I am not alone in the pursuit of a perfectly organized collection!  I shared here recently regarding my hobby makeover.  One thing I've neglected is updating my wantlist tab,  Collecting These Boys.   For now, this list is current!  I'll be moving my completed sets to a new tab as soon as I remember how to create and make the tab visible.  It's been a couple of years since I've done it!  Fortunately, I'm no longer years behind {felt like it at times} sharing the great incoming packages from this spring.

Kevin le' Papoy, oui.  He makes us smile, purchasing cards on the internet and paying extra for shipping to France.  He sorts and repackages these then sends them back across the ocean into our mailboxes.  He's different like that, a very special guy.  When he isn't sunning himself by the pool, he's working on his own collections. 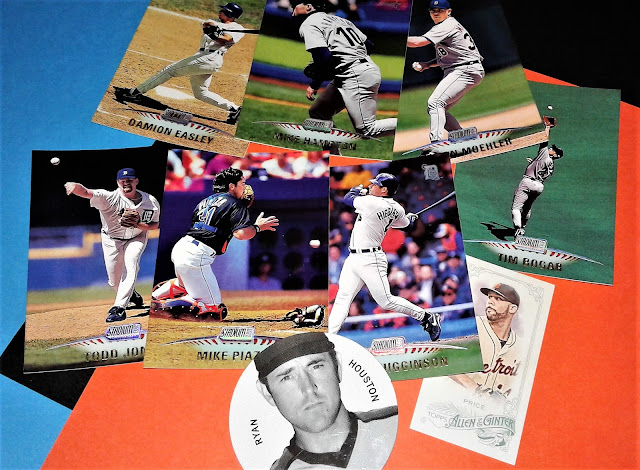 That's some sweet 99 Stadium Club right there!  Piazza among my Tigers, all sharp and colorful. 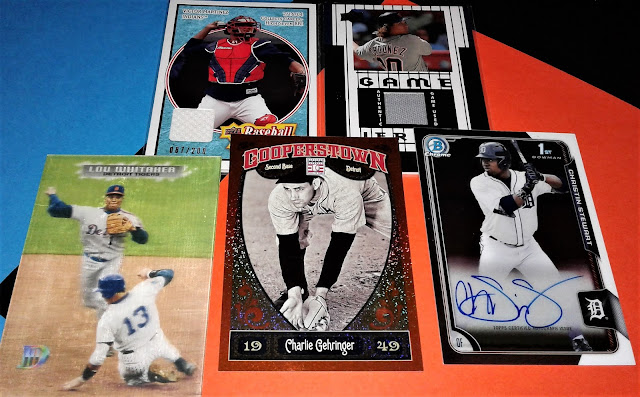 Front and center is Gehringer #/325 from 2013 Cooperstown.  2008 Baseball Heroes Martinez relic, 2008 US Game Jersey Ordonez.  These five were among several relics and autos packaged up specifically for me.  That's how Kevin shops.  He never fails to include relics and.or autos in the mix with some great cards.   I owe you a nice package.  I'll be sure to include some sunscreen!


It may have been a few months since I received this box of cards from Shane but his generosity is not forgotten! 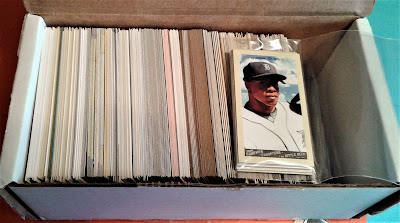 Inside were at least one hundred right off my want list, all eager to be invited to live among their brethren in team bags and binders.  Looking at these photos again, I still can't believe how many cards I was able to mark off!  Here's a small sampling of the goods:

Shane included an assortment of autos.  A couple of these players are more well-known like Inge and Weaver - and Brad Ausmus .  Oh Brad.  I don't know how to feel about you these days. I trusted you. I can't say you've betrayed me.  And maybe I'm at fault, having too many expectations.  But where's the fire in your belly?   Why all the indecision?   Someone has to shoulder the blame.   Mr. I  died and took the team with him.   Such a sad year for Tigers Baseball.  Brad, I don't think I'll write you anymore.   You won't even notice. 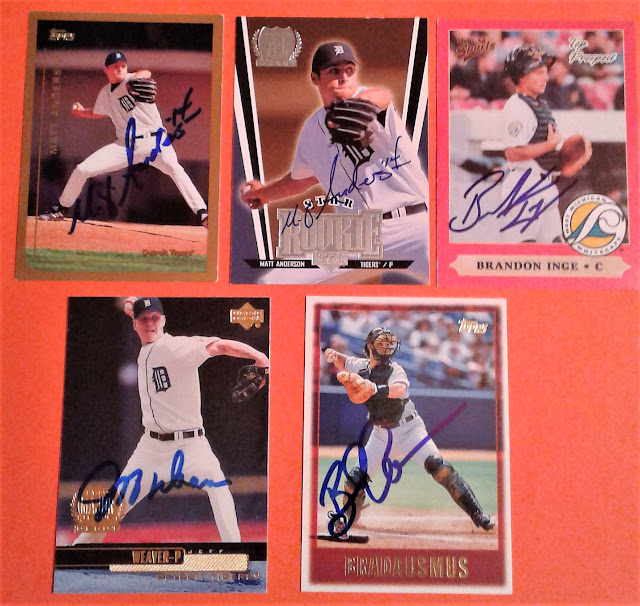 This card was the gem of the box!  1969 Topps in gorgeous condition!   Only one remains to complete my team set for this year. 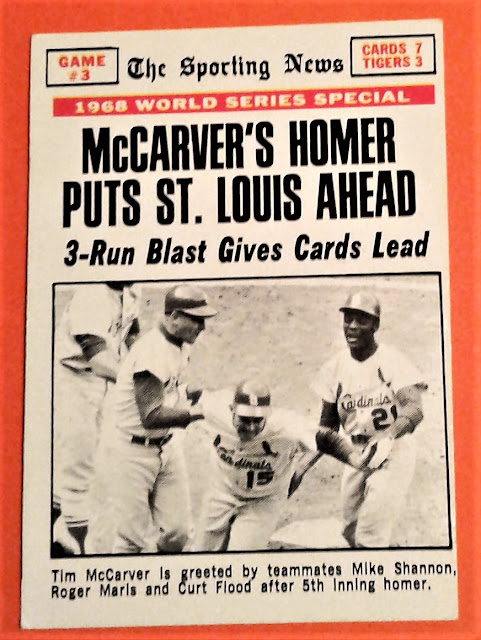 This box of cards was definitely Off the Wall, the contents so unexpected!  Thanks Shane!  You'll be hearing from me soon!

Only a couple of shares to go and this gal is up-to-date!

Yeah, I've had them.  Catching up isn't easy when you're months behind sharing the goodness of others.  And today, we are doing a little bit of that!  This post features first time trades with a few of our blogger friends.  Months have passed since receiving most of these cards. What better way to say thanks to these Firsters than allowing the scans to yellow with age!

Let me preface this trade with I don't collect hockey.   I was drawn to the Blackhawks Indian logo by chance, just a few months ago and couldn't put it out of my head.  It is quite simply - beautiful art! My Native American heritage at one time called me to collect the old Goudeys.  My stupidity allowed me to sell my collection of these beauties 15 years ago.  So how now, to have a bit of cardboard history in the way of the original Americans?   Baseball Cards Come To Life - Bo Rosny took care of the problem with these: 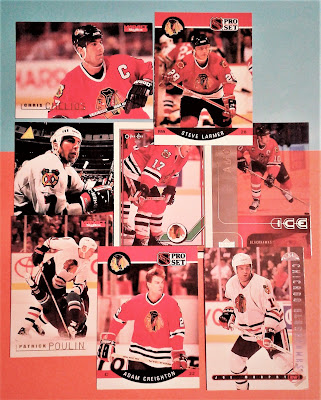 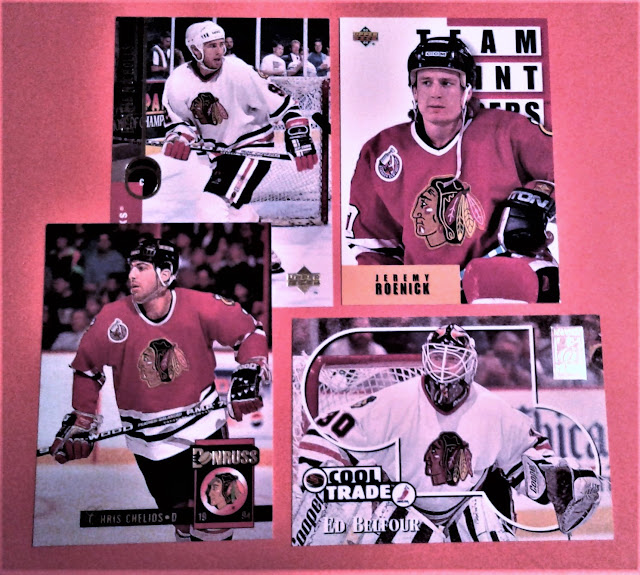 The color did not come through with my phone as I was between  scanners at the time.  These cards show off the logo!  At some point, I'll likely own a long sleeved-shirt or jersey for the winter months, which in MI is Sept-June.   Thanks Bo!!!

D'back Daniel dropped a mailer on me that included some set needs and a couple of parallels.  Who says no to this??

Oooo, pretty cards include a 2015 Chrome Sepia McCann and 2016 Heritage Chrome Fulmer RC.  He's one of the few Tigers having a good year.  I say we lose this guy!  He's much too good for us. Sell Sell Sell while we Tank Tank Tank.   Daniel, you'll have a return package soon!

GCRL may have forgotten about the fat little envelope he sent me.  If not, he may think that I did. But here's proof of my appreciation: 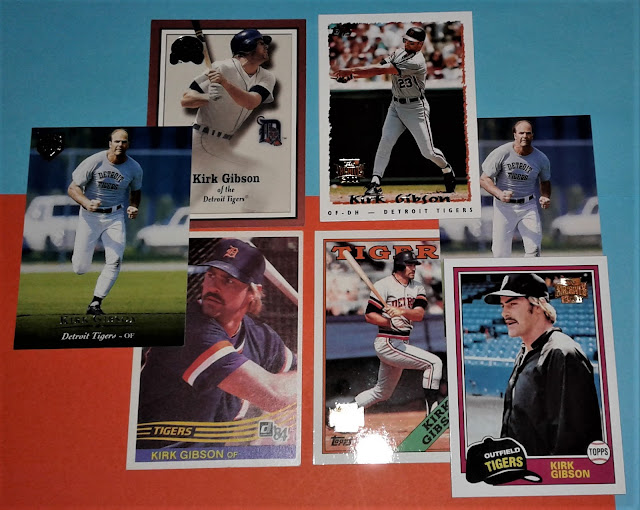 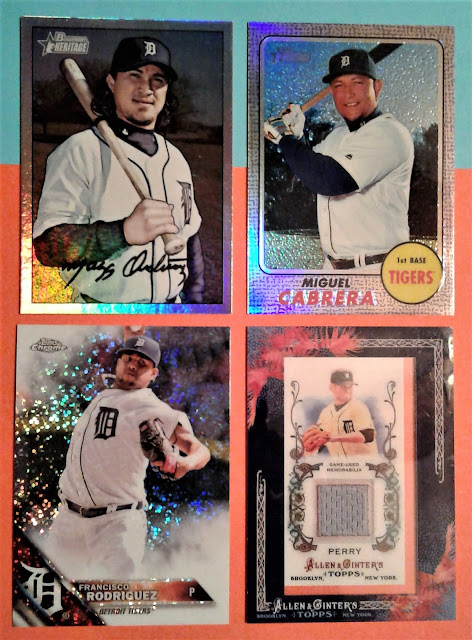 Jim sent a great batch of Gibbys and attractive parallels! Oh the woes of F-Rod!  He and Miggy look much better on these cards than in their recent performances!  The F'er is gone but Miggy remains, along with  his salary.   Mig has shown signs of coming around only to commit another error, hit into a DP or strike out.  His frustration shows.  Many Tiger fans wonder if his struggles are injury related or perhaps stress caused by fear and uncertainty for the safety of his family in Venezuela.  Jim, there's a return in the works!  Thanks for your patience!

Along with March came a friendly pwe from Oscar - not the grouch - the other Oscar, All Trade Bait All the Time!  He sent an Aloha  with a nice grouping of Tigers: 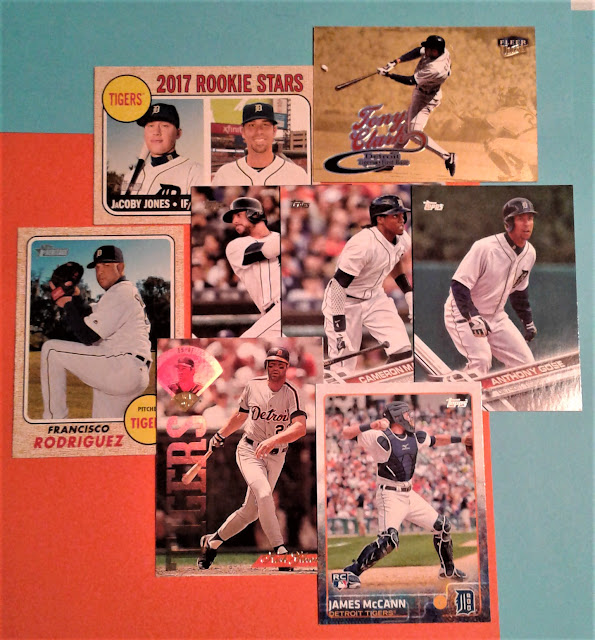 My first JaCoby Jones RC!   He's a young fellow with some potential, traded from the Pirates for Joakim Soria, and from my home state of Oklahoma, in a little town just outside OKC,  Chickasha - Chik-ah-shay  that's how we Okies pronounce it.  In his first MLB plate appearance, JaCoby hit a three-run homer against the White Sox becoming the first Tiger rookie to hit an Opening Day homer since Kirk Gibson in 1980.   With that began the JaCoby fever of which many Tiger fans and card collectors still suffer .  I tend to steer away from prospecting therefore appreciate having this card sent to me!  Oscar,  Aloha!   You'll be hearing from me!


A more recent package was received as a thank you from Now and Zen's Doe.  I sent her a box of Cubs and White Sox as a welcome to the blogs.  {Fortunately, she collects these teams!}  There were no expectations for a return package but she filled that little box up and sent it back to me.  I found mostly Tigers along with a few hits on my PCs: 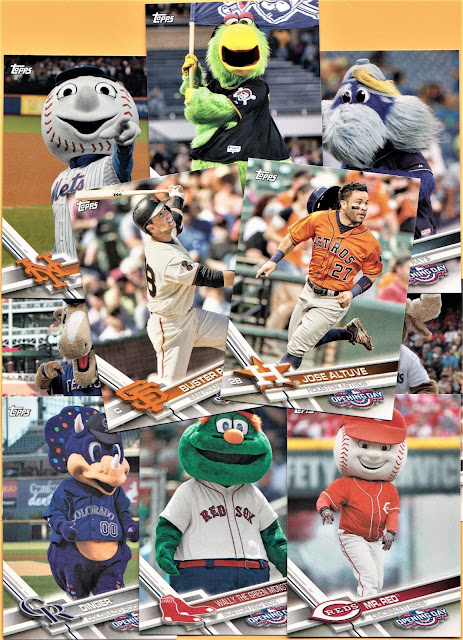 Doe had a few fun cards available which I'd mentioned liking.  She put all of them in the box - Posey and Altuve among the mascots! Thanks so much for the trade.  We'll do it again!

Email ThisBlogThis!Share to TwitterShare to FacebookShare to Pinterest
Labels: 2016 Heritage Chrome, All Trade Bait All the Time, Baseball Cards Come To Life, Cards As I See Them, Chicago Blackhawks, I have a fuzzy belly., It's Like Having My Own Cardshop, Jingles, Zen and Now

I've been out-of-pocket for a couple of weeks, which included a stay-cation.  During that time, I had company for an overnight visit. My guest room is rather small so I gave up my room for the night. When I moved in a couple years ago I felt it was important to have a comfortable place for guests. During all this time, there's been no other overnight company.   So while I was off work, the guest room was dismantled!  I donated the furniture to a good cause and went to work! 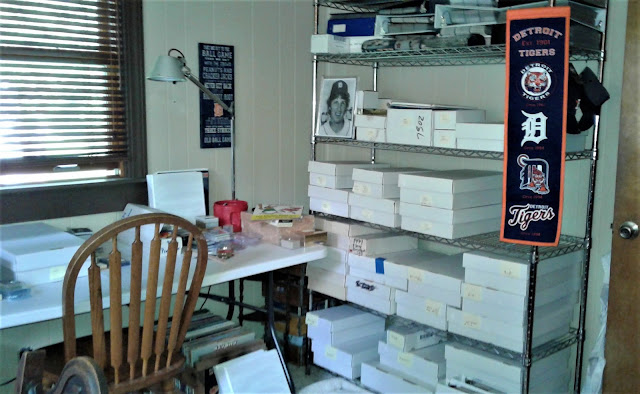 Heavy duty shelving took over the spot left vacant by the dresser.  It filled quickly with all the new boxes created during my recent sort-a-thon. Up went two 6ft CARD tables for various stages of sorting work. No more cluttering up the den!  The two shelves under the binders hold the Tiger collection. The next shelf contains PCs, working sets and binder cards. The bottom shelf is full of cards for trading. 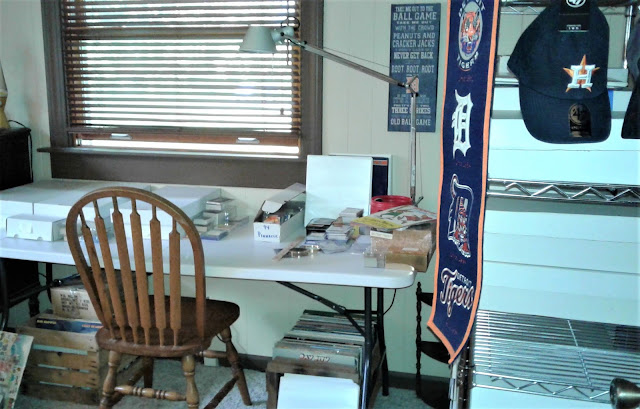 The Tigers' table - predominantly for team set and Tiger organization. Underneath there are two crates of albums.  I'm a vinyl junkie as well.  The window faces east which means no afternoon heating!  I may miss that in few months! 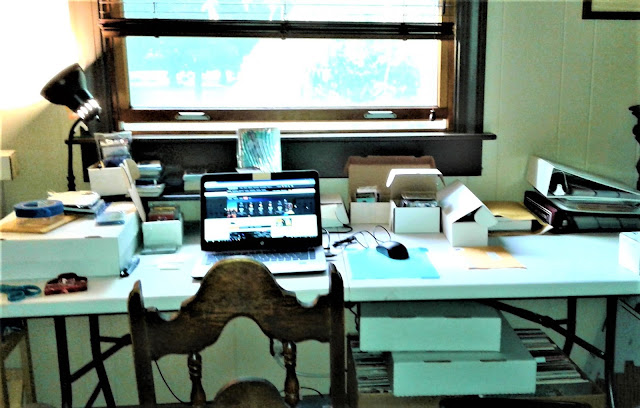 Dragging out the MANY several thousand count boxes and putting them away three or more times a year was getting old.  The inability to dedicate a permanent place for the hobby contributed to the disarray of my collection.  I had no place for scanning when packages arrived. Instead they stacked up on my desk for some other day.   This table is for scanning and trade package prep.

A jumbo Finest Altuve propped on the tray behind the laptop keeps me company - and sometimes I have a helper: 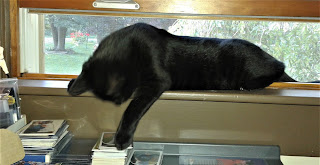 Today a comfortable breeze is keeping the room cool. There's a little feeder out front with a weeping cherry just outside the north-facing window, which always holds a little winged friend or two. The house sits back about 125 feet from the road so the yard is deep and gorgeous.  It's a grand view from the table!

I also have baseball and music memorabilia, and 70s pop culture for decor - and a little stereo to hook up. Gotta have tunes while working on cards!  Once it's a bit decorated, I'll show off the whole room. It won't look like the man cave so many of you lucky guys have but it's cozy! 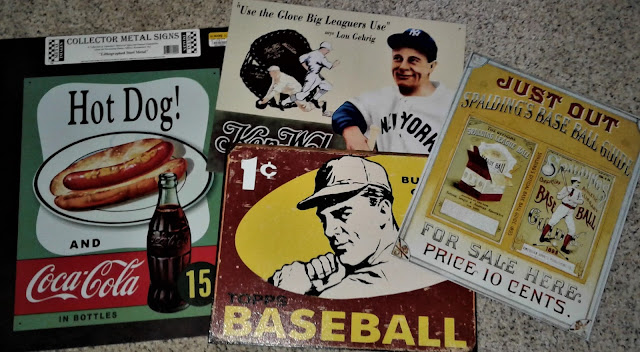 A new hobby room means the study is reclaimed!  No more piles on the desk with boxes stacked against the wall in what is the smallest room!  At one time, I'd considered an addition to the house. The space needed was already here and available! I'll gladly sleep on the couch if guests need to stay over.

This can only mean the time has come.  With the MLB trade deadline rapidly approaching, it seems only fitting -

THE TRADE BAN IS LIFTED!

I'll begin putting trade packages together over the next three weeks.  I have a handful that remain to be shared and I'll do that with the next couple of posts. Expect another giveaway of sorts.  I am still purging! 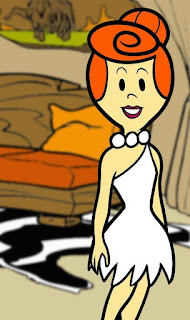