Angelic Trade and a Collective Hoarding

I don't even want to know what my mail carrier thinks with every delivery. She's seen a lot of pick pocket envelopes in the last three months and twice as much incoming mail for...ME. Perhaps she thinks I'm popular? A shopaholic?  None of these goodies were addressed to 'current resident.'

Angels' man, Texas Tom, sent a fun envelope filled with sticker needs, Phillies' Dutch and Harpo and a glowing group of stars!  All but Harpo were from my wantlist, always appreciated! The Harp was part of a pack bust. I mentioned liking the card and voila!! He's a gracious fellow. 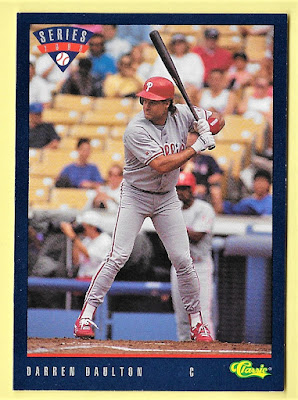 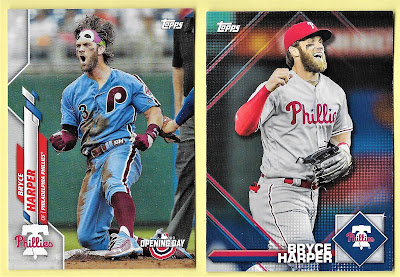 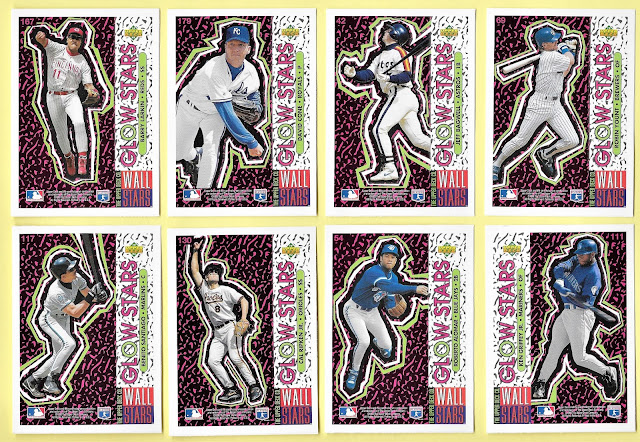 Those crazy 90s! Fun cards! My dilemma - put them in the fun binder, or with the 1993 Fun Pack set build which is coming along, not. Twenty seven years later, I still need a hundred cards. Glow Stars still needed:

Thanks for the help, Tom! Come back next month 'n' pick my pockets!

If you follow Greg at The Collective Mind, perhaps you've read several of his 'Dispersing the Hoard' posts. Greg bought a collection with an amazing card assortment spanning the late 90s through 2006 or so. These were up for trade, or sale if you were unable to assist with his want list. I couldn't lend a hand there but was happy to free up some space in those boxes! I've done this three times now and am still tempted to return and pick a little more. Many of the available cards were from "current player sets" of the day. I'm drawn to the retired or deceased fellows. Pardon the dark humor but as I've said more than once, 'the only good Yankees are dead Yankees.'  For example:


I received 23 cards from 2004 UD Timeless Teams, a set too large for me to tackle! I pick these cards up when I can. 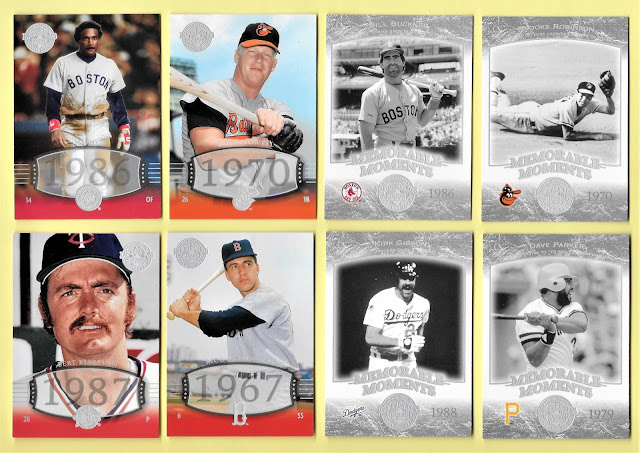 Also from 2004 and Upper Deck - Sweet Spot Classics! This 60 card batch knocked a lot off my want list. I was crazy excited to see these weren't claimed! 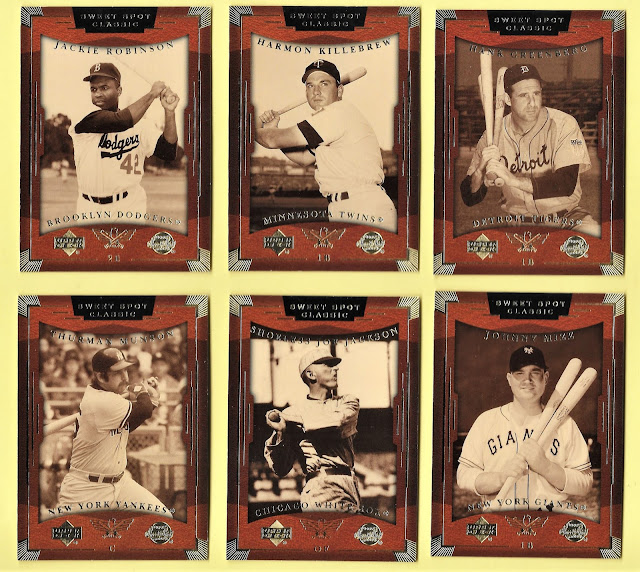 The first dead  and old guys set I ever attempted was 2001 Upper Deck Hall of Famer. I finished the base set with one box bust back in the day. The base card design is simple, and I think - stunning! I took every card he had to divide among my player collections. You may see the extras pop up on pick pockets one day. 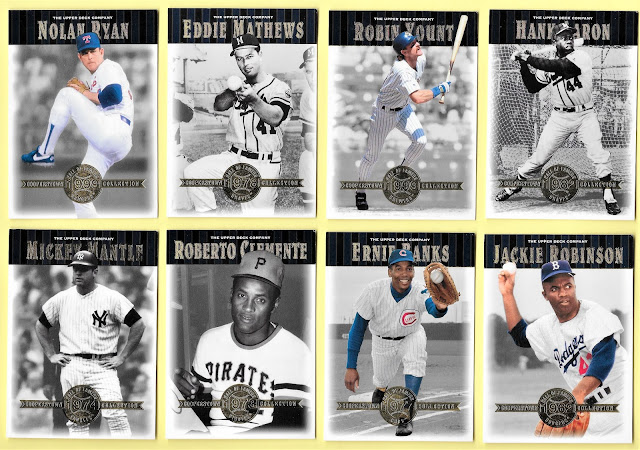 Subsets are also unique, perhaps a bit busy but colorful. These include Origins of the Game, Hall of Records and National Pastime. 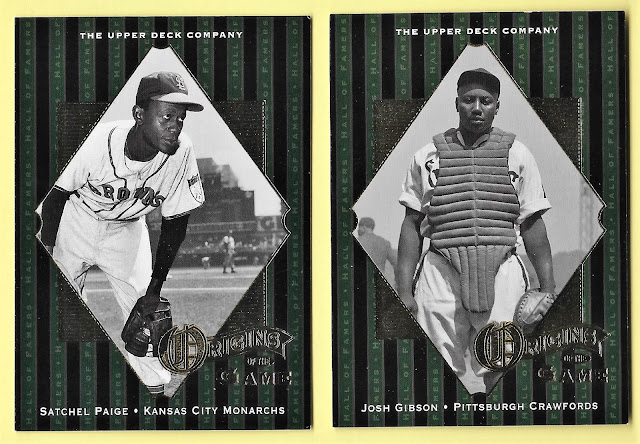 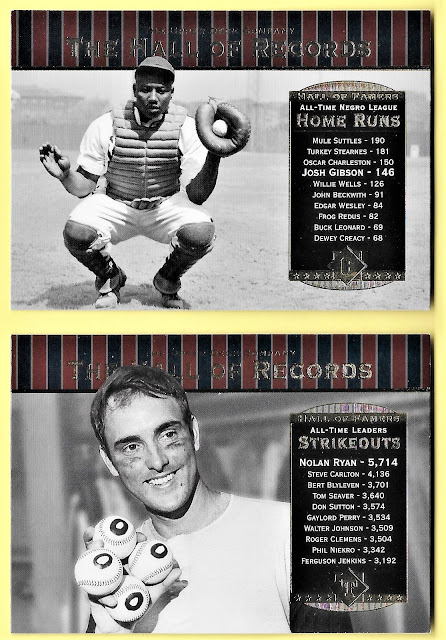 As for the insert sets, I'm still trying to finish three:

Greg had a few for me: 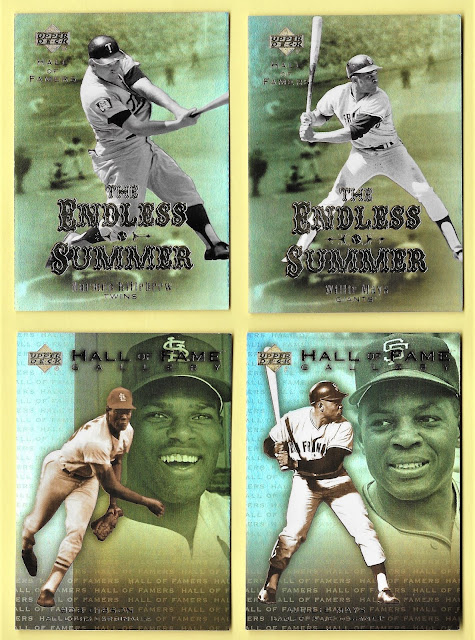 I don't know too many baseball collectors who are happy to see UD gone from the hobby. 'Goodwin Champions' makes me a little sick every time I spy one in a dime box. Awfullllllllll.  Looking at the cards I chose from the Hoard, it's obvious UD was a heavy part of my early collecting history.

Not to knock Topps but I wasn't into the white borders and picket fences back then. There are a few sets  I've come across in recent years that had I still been collecting after 2002, I would've forked over the dough for them. 2003 Fan Favorites would be one - and 28 cards from Greg was enough to whet my appetite for more. 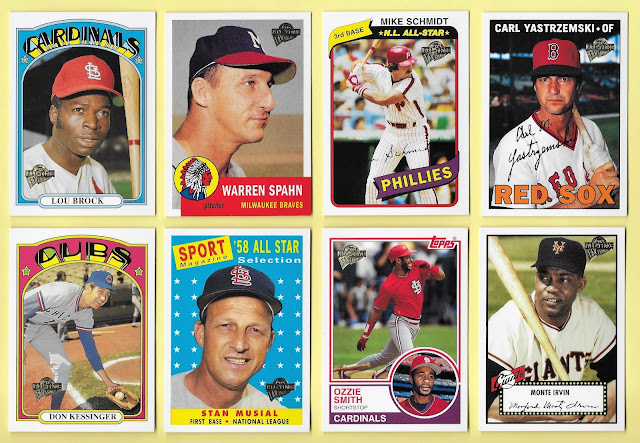 I hope Greg is able to find a home for his remaining hoard. I'm elated to add all of these to my collection. I won't share the cost but to say cheap cheap cheap. It was as good as any card show could've been. We've all missed them during the pandemic. I did pick up cards from Cracker Jack and old school Elite to share around the community. I'm not always  thinking of myself.

I'm giving myself a pat on the back today.  By now, I've usually disappeared for a few months. I've been busy outdoors which stretches the time between posts.  Although I'd like to blog daily, every 7 - 10 days is more realistic. Unfortunately, that's not enough time to keep up with shares. These past couple of months have brought some larger trades my way. I try to post in order of receipt. As of now, we are all the way up to APRIL.  And what did April bring? A nice little box from Florida filled with over 200 cards! A nice assortment for player collections and miscellaneous set helps were included. 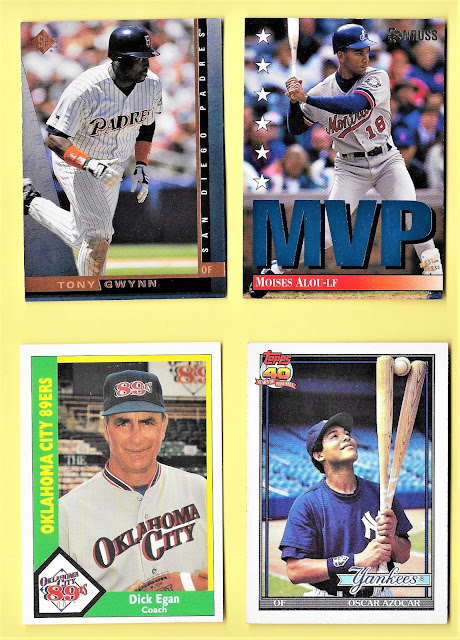 1994 Donruss MVPs are new to my want list. While going through my collection, I discovered all of 94 Donruss completed but for this 28 card insert set. Well why the heck not? I'm starting this set from scratch. Including Grace and Bagwell, I own three. The Azocar is one of the fun cards you see floating around the blogs. I have a couple of these so this one will go to the pick pocket box.  Finding 89ers in a trade package is like a hug from home.  I'll always be an Okie.

I still have room in my heart for Altuve. All six of these cards were on my wantlist: 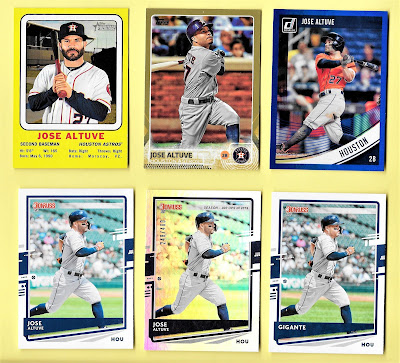 Caminitis from 1998 Tek and Stadium Club - both new to me: 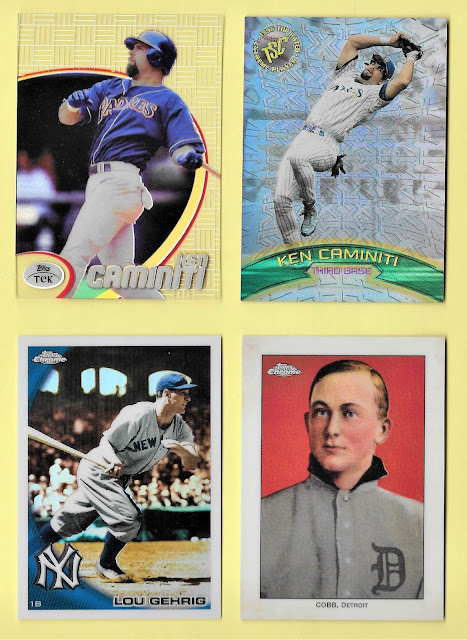 The scan doesn't reflect the shiny refractive glow of Lou and his neighbor Ty.  Lou is a 2010 wrapper redemption. Cobb may be even more rare. He's from a 25 card set found only in 2019 Topps factory sets - Chrome Greatest Card Reprints Refractors - actually one of the few reprints I was chasing.

I mentioned 200+ cards. Most were for another impulsive set build, one I've toyed with for years. I finally committed to the 396 card hunt, starting from scratch.  There were 200 1995 Topps Cyberstats in that package! I've enjoyed the foil fronts for years. Topps made some excellent photo choices in 1995. 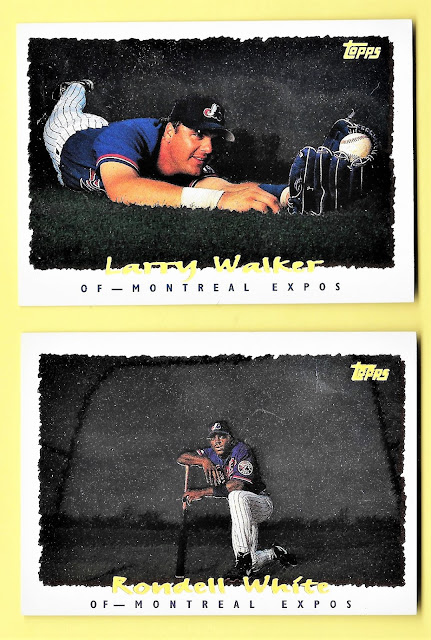 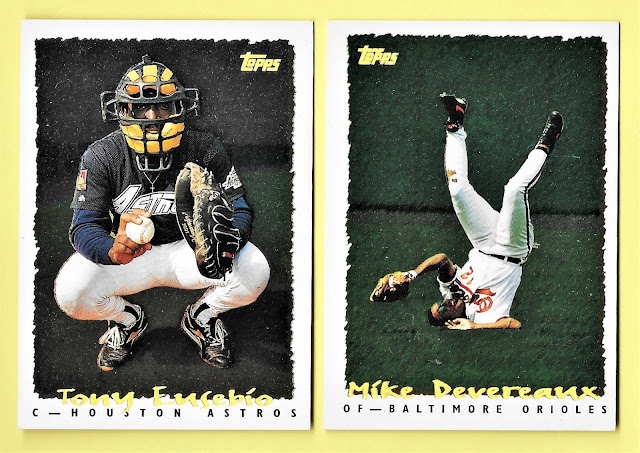 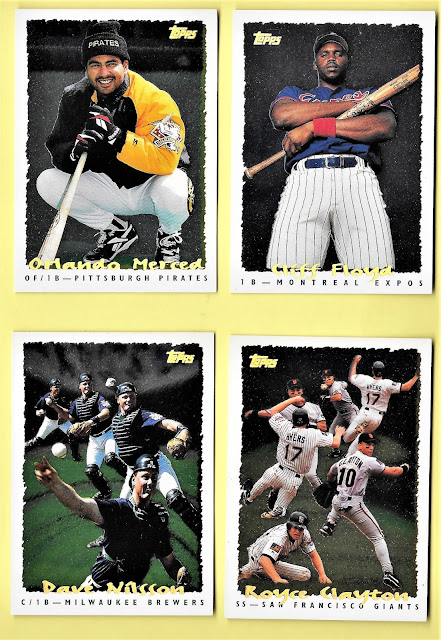 Crazy generous, wouldn't you say? The young man who sent these cards dabbles a bit in Topps cards that never were.  Jeremy included a few of his creations which fit perfectly into my collection. 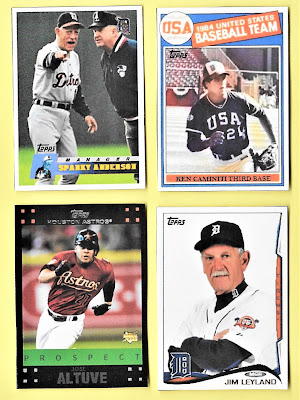 What does one send in return for his generosity? Well, Jeremy is from Michigan and still collects his Tigers. I always have extra. He lives  in Florida and collects the Rays. We ALL have those on hand!!!

Jeremy also posted nine cards on his blog awhile back; first come, first pick. In my greed, I chose two, both for set builds. 2000 Pacific Gold Crown Die Cuts are some of the best-looking cards I own from that decade. I still need two - Ripken and Piazza.  2018 Topps Independence Day is by far my favorite Topps Independence parallel. I can't afford to chase the whole set but pickup cards when I can. This was a sweet card to chance upon! 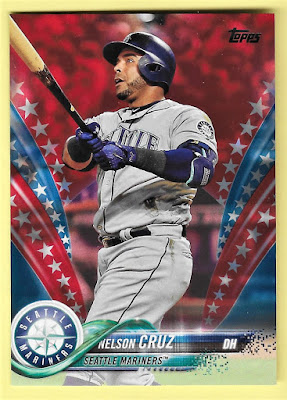 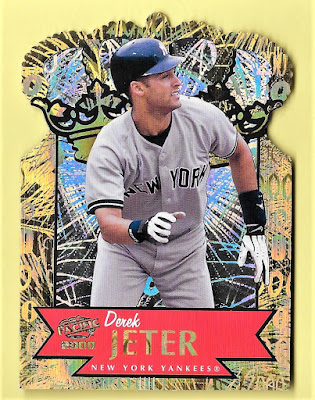 I can't say thanks enough to Jeremy. It was our first trade. It took me a month or so to reciprocate but was happy to send him cards from his wantlist as well!

July 4th is creeping up quickly. I still have a few more things I'd like to do outside before my party. Fireworks have been purchased but I cannot find anyone selling rain. It's been unusually hot and dry this month. No rain = no fireworks. I'm always a little bummed during a dry spell anyway. All my little creatures have no water. I saw two wild turkeys with their little chicks tonight, strolling across my backyard, along with several bunnies. I wonder what they'll be drinking. Perhaps next year, I'll put in a fountain or shallow pond of some sort. It would make me feel better. Nature is out of my control. Most things are.

Email ThisBlogThis!Share to TwitterShare to FacebookShare to Pinterest
Labels: 1994 Donruss MVP cuz why not, 1995 Topps Cyberstats, 1997 SP five cards to go, have you ever seen the rain, making politics great again, Topps cards that never were, trade post

Arbitrary: random, erratic, unpredictable. Nothing average there. The same is true for the package I received in April from Brian, who claims to be highly subjective and completely arbitrary.    He's been a steady blogger for over five years. It's been awhile since we swapped cards. He made up for lost time quickly.  Not only cards but a couple of packs were included. 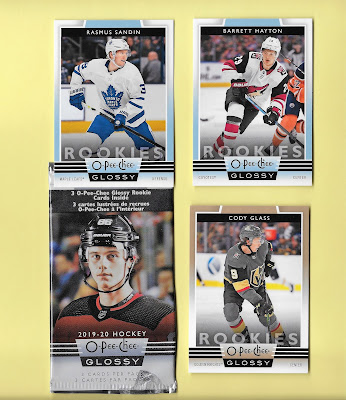 I'd forgotten how colorful the Victory release is. I don't recall ever buying a pack. OPC was my first hockey pack bust. I didn't land any Blackhawks but it was still fun.  Now comes the hard part.  Brian packed so much into his efforts, I don't know what to share. 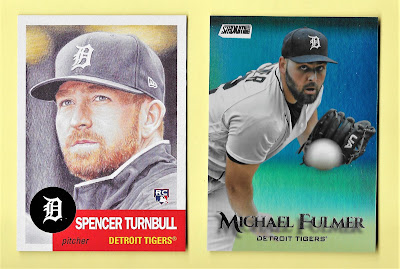 2019 Stadium Club from my wantlist. Breathtaking beauties and quite possibly my favorite baseball cards in this post. 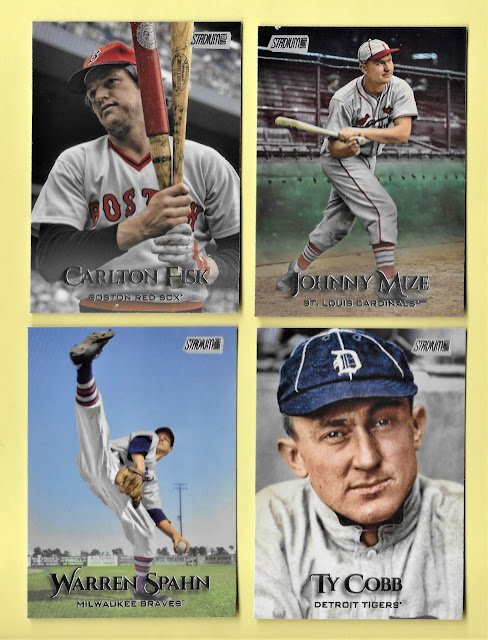 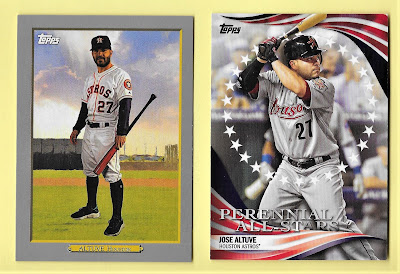 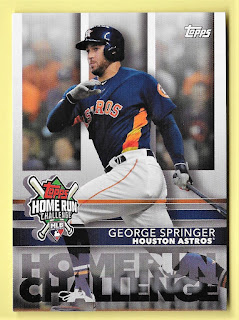 Oh there's more. Tigers found their way into the envelope. They don't call me a cat lady for nuttin': 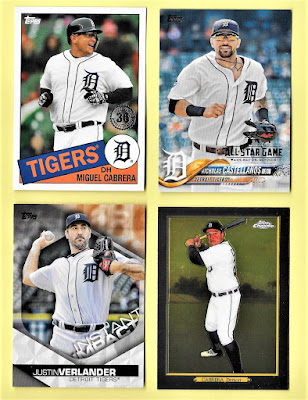 There have been more than a few Free Card Friday's on Brian's blog. I've missed out on many of these freebies in the community. The past weeks have been difficult for most of us. These giveaways bring good vibes and smiles to all their recipients. Among my choices were bat racks and mascots!

Before you get your get your feathers ruffled, I don't believe the pope is mascot to the Catholic faith. I have great respect for the Roman Catholic church. Someone else had chosen this card right before my claims. I commented that I wanted to pick the pope. I do like this card. It will go nicely with my pitching nun.

My favorite card in the package from Brian isn't baseball but an older milk carton card. I could find nothing anywhere on this one; not TCDB, Beckett or the internet in general.


I wonder what Abe would say about the times we are living in right now. His record on race wasn't perfect but in his wisdom he knew this country would split if slavery continued. Here we are 150 plus years later. Slavery abolished, thank God, and finally desegregation.  But how far have we come? Why not attempt to understand the challenges blacks can often face? Their lives do matter. No one is saying all lives don't matter. Would any white person wish they'd been born black?  I think most of us would say "not me". This all hit home a few days ago, right here in small town Michigan, not Detroit, in my predominately white town with its perfect yards and touristy shops. There is a locally famous rock in a prominent location upon which folks leave greetings for birthdays, graduations, anniversaries and sometimes memorials. Not this time: 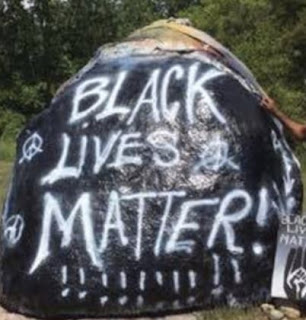 In 2020? We are coming out of a country-wide lock-down. Folks are hot and agitated but this is more than a skin-deep ugliness.  Absolutely unacceptable.  My friends, you know I don't get political. This blog is a happy place. This is the first time I've written more than a line or two about serious issues we face as a country and frankly as people. Where is empathy? 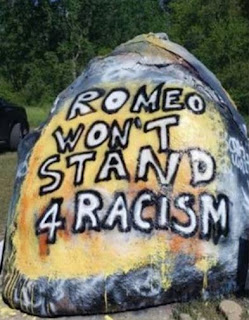 I can tell you my little town came together to repaint that rock. Groups of people have been standing with it all day long, in a show of solidarity with those who painted the original message. Volunteers are taking turns sitting with the rock all night too, to ensure the message remains unchanged.

Sorry for the rant. I felt the need to put my voice into the universe. Thanks for sticking with me, if you did.

Email ThisBlogThis!Share to TwitterShare to FacebookShare to Pinterest
Labels: 2019 Stadium Club, be the change you wish to see in your world, Highly Subjective and Completely Arbitrary, the Romeo Rock, trade post
Newer Posts Older Posts Home
Subscribe to: Posts (Atom)