It had been at least ten years since I'd boxed up the remainder of my collection.  When the first lid came off, I could smell the trouble. Baseball cards do have an aroma all their own, much like books.  I love the scent of both.  (A baseball card Scentsy...there's a brilliant idea!)  Sharing my cards, trading - that's what made it fun in the first place.  Times change, friends move away, drift or sometimes die.  My trading partners were gone. (I'm the one who moved actually, and another passed.)  The Ump wanted to see my cards.  I'm much too polite to say no.  I'm also much too generous.  I started a stack for her, which turned into a 500 count box...  Perhaps an exaggeration, perhaps.  Then I found the Cabrera rookies I never knew I had.  I'd saved all the rookies I'd ever pulled.  Fortunately, I had two and kept one for myself.   I'd sold all my Jeter rookies, wishing now I'd kept just one.

Off comes the second lid. What the Heckler?  Is that a 93 SP set?  Sleeved and nestled in the top of the set box was Jeter, so young with a long career ahead.  What do you mean he's retiring??  But he wasn't even thirty years old when I boxed him up!   Well thanks a lot Derek.  Now I have to go through everything.
The 90 Leaf set. Too many sets from 1994.  Several years of Topps factory sets, unopened.  Hmm, unopened boxes of cards too.  Nothing special there, unless you're into the 94 Fun Pack, or Triple Play. Yeah, that was worth putting away for a few years. 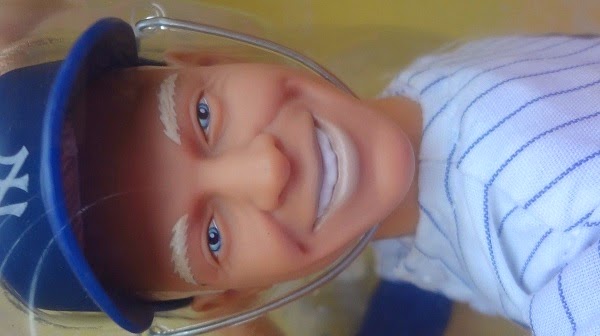 Box three - lid be gone!  AH yes, the vintage cards. Vintage.  What a funny word. Most often used in place of old.  I've seen listings on eBay describing cards from the 80s/90s as vintage. NOT. Not of a particularly attractive design. Not some of the best issues.  If they're old at all, they're old junk. Junk cards.  What did I consider vintage?  Let's take a peek inside.  Miscellaneous old Topps, picked up cheaply, but beautiful to me:
﻿﻿﻿﻿﻿

Oh those beautiful Bowmans!  Here are a few I picked up somewhere along the way.


Baker (d. 2004) played for several teams, most notably the White Sox. Batted left, threw right.  Career BA of .251, RBI total of 196.  Great looking card anyway!
Barney (d. 1997) played a handful of years for the Dodgers with a W/L of 35-31 and 4.31 ERA.
He suffered a leg injury which contributed to an early retirement.  He walked 48 batters in 33 innings and thus ended his MLB career.
Eddie Kazak (d. 1999) third base for the Cards and Reds from 1948 - 1952. He enlisted and suffered injuries during the Invasion of Normandy. A bayonet wound in his left arm and a shrapnel shattered right elbow didn't keep  Eddie out of the game.  Career BA of .273 with 165 hits.  A player in the minors til 1960, he left us with this gorgeous Bowman!

I have many more cards from 50s and 60s.  Older, yes.  Vintage??  Not sure. It's a PO - personal opinion.  When looking at my own pictures from the early 60s, I certainly don't think vintage, just youthful!
Posted by acrackedbat 2 comments:

I discovered baseball cards in 1993.  By then I'd missed out on some beautiful cardboard. All those years gone by when gum/card packs could be had for 15 cents, I was busy pasting bubble gum rockers from 16 Magazine and Tiger Beat to my walls.  Now all I want is the 75 Topps set!   (I just didn't know.  Please  forgive me.) 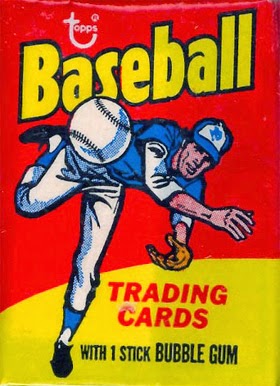 1975 was a pivotal year in my life.  I was ten years old.  My mother died, my father remarried six months later - and I learned there was no Santa Claus. (Yes, most kids find out much earlier. As you can see I'm a bit slow to catch on...which is why it took nearly thirty years to discover baseball cards!)  A part of me still longs for the early 70's, when I could just be a kid having fun. The 1975 Topps set is exactly this for me!  The colors schemes are youthful, bright and fun!  While I love 72 Topps for the mod design, I know how difficult this set is to build. It was hanging with a friend in her attempt, that I was introduced to baseball cards.  Yeah, I was a mocker.  I saw expensive little pieces of cardboard and ribbed her endlessly, until the bug bit me.
This  friend of mine was also a Ryan collector.   I'd noticed    her admiring  this gem at the local card shop. Her birthday was coming up, so I stopped in to pick up the Nolan.  What came over me when I held it in my hand, I can't explain.  Suddenly, I had to have one too.  It was humbling since I'd dished out so much grief over her card habit.  But it wasn't just this card, no.  One wasn't enough.  The desire to have this card came with the need to assemble this insert set.  Just one set...
I broke up with card collecting in 2002.  Packed up and turned my back on the hobby, cold Turkey Red.  Only one of many a frustrated collector in a time of  too much product!  I sold many of my nicer cards: rookies of Arod, Jeter, McGwire, Pujols, Griffey etc. and my 1961 Topps starter set.  Avoided the retail cardboard shelves for years, until the Fall of 2013.


﻿﻿
My friend (affectionately known here as The Ump) actually collected cards when she was a kid. She owns a few 68-72 Topps cards.  When she finally asked to see what remained of my collection, I unpacked several boxes of

sets and player collections. She is a big Tigers fan so I started pulling random
Tiger cards for her collection. (Did you know Mantle was a Tiger? Me either. She assured me he was definitely a Tiger and belonged in her collection. )
Little did I know,  when I opened the Pandora's box of cards,  the bugs inside were still very much alive..
﻿
Posted by acrackedbat 9 comments: