Hanging by a Thread

Post Season blues.  I shouldn't be bummed. My Tigers aren't dead yet, although playing like they've been slightly poisoned. Getting beaten up by fourth place teams and hanging by a thread with a post-season berth.  The Tigers. 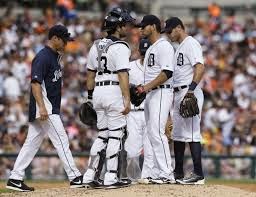 What could possibly cheer me up?  Sharing some 2014 Triple Threads with you!  Literally.  If you see a card you're interested in - leave a comment. I'll be posting more of these for trade later on.  This edition of Cracked Bat offers some base, cardboard #/325 and a handful of patch. 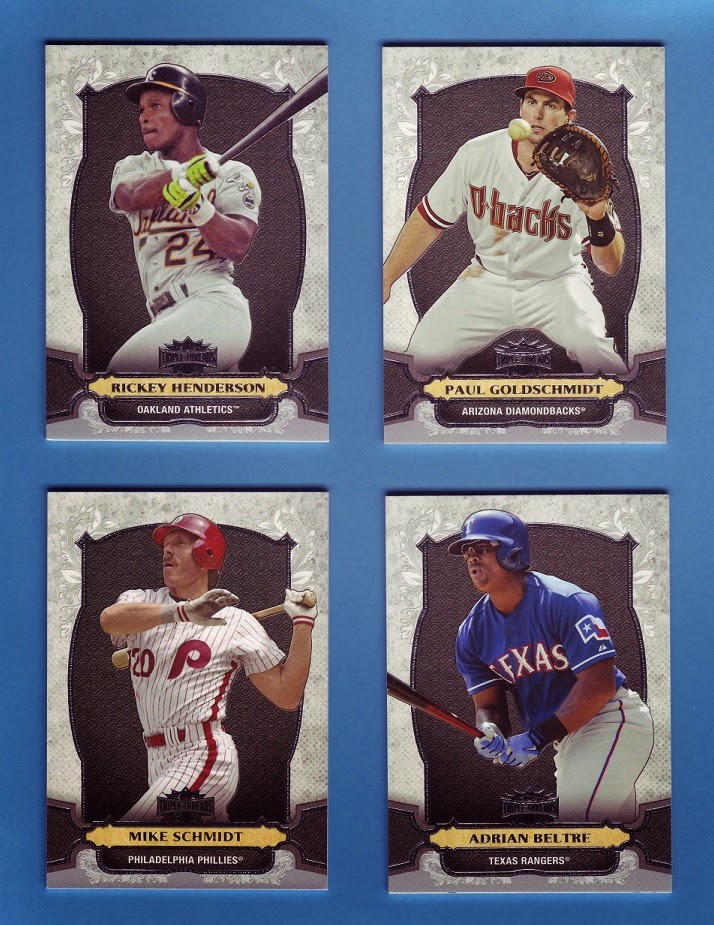 I grabbed a couple of nice lots off eBay.  After seeing new pricing, I'm thrilled for being able to pick these up inexpensively.  My collection grew a bit with Tigers and retired players from my list. I like the look of 2014 Threads.  The patch cards have a smooth matte finish.  Really sharp! 96 Fleer was one of my fave issues in the 90s. Matte's not for everyone. 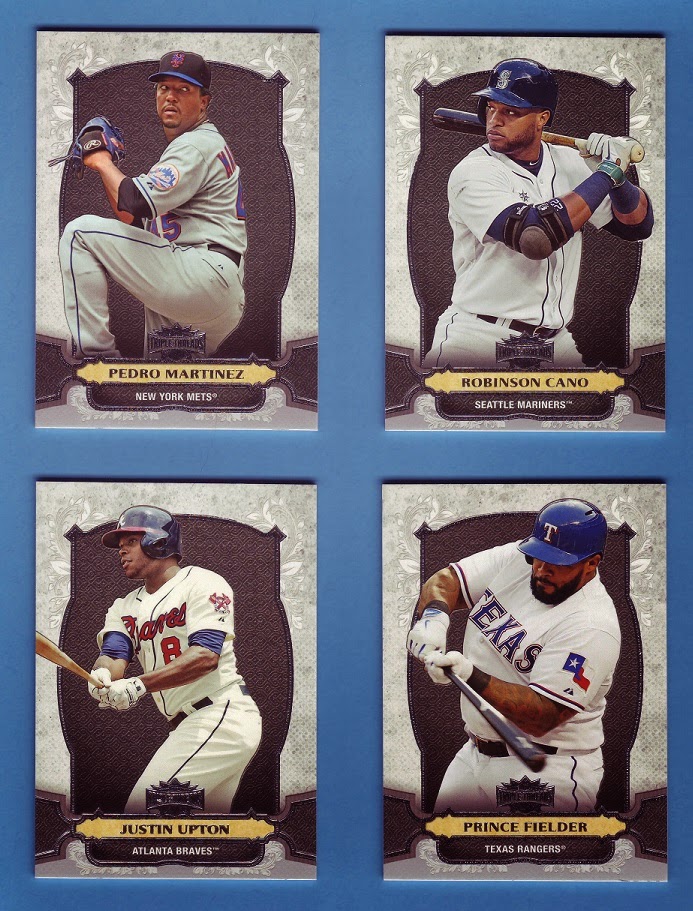 Prince Fielder eats like a King!  Good grief!  His future cards will be postcard size issues if he doesn't lay off the chips n dip!  I'm sure this photo is cropped from a close-up.  I apologize. 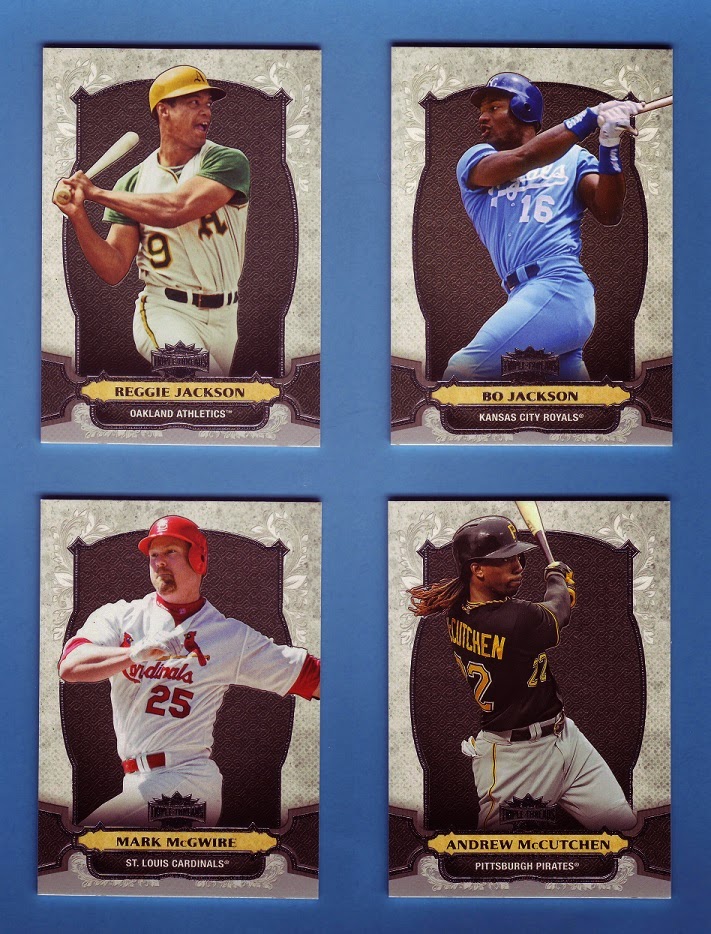 Bo Jackson.  I never understood his popularity. Was it all hype?  I borrowed this chart from the resource of geniuses -Wikipedia: 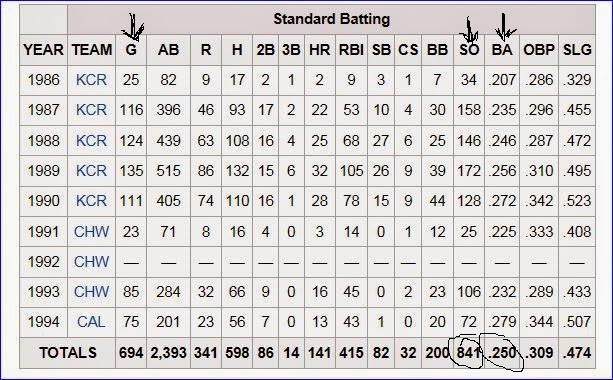 Mr. Two Sport couldn't give his all to THE game
due to football interests.  No, let's not be forced to choose.  Perhaps we can make some bling by
playing both games at a mediocre level.  Funny thing tho - Reggie Jackson hit .262 and struck out a LOT over 21 years time and hit on average, the same number of HRs a year as Good Ol' Bo in his three best years. Reggie is a true HOFer! We can only wonder about Bo.  He may be the only one who knows.

﻿﻿
Amethyst Triple Threads #d/325.   Nice product.  I can't afford to bust these or any of the top tier offerings of Topps. One box with three cards, or one box with a card...not for the average collector.  I did  pre-buy Stadium Club.  The first full box of cards I've purchased since 2002.   $95 for 72 cards and guaranteed hits. I'm a base card collector.  A nice insert, signature or relic won't be turned down but I want a nice base set.

﻿﻿
I have a decent Maddux collection, perhaps 200 cards or so.  Far from complete. I'm listing my duplicates on Zistle soon, along with ALL of the Arod and McGwire I still have.  Most of my steroid cards are gone, banned from my collection.  I hope to use Zistle as a trading tool for my blog friends to peruse at their leisure, mouse in one hand - cool, refreshing beverage in the other. I do this for YOU.  It has absolutely nothing to do with any perceived need to organize and make new lists. 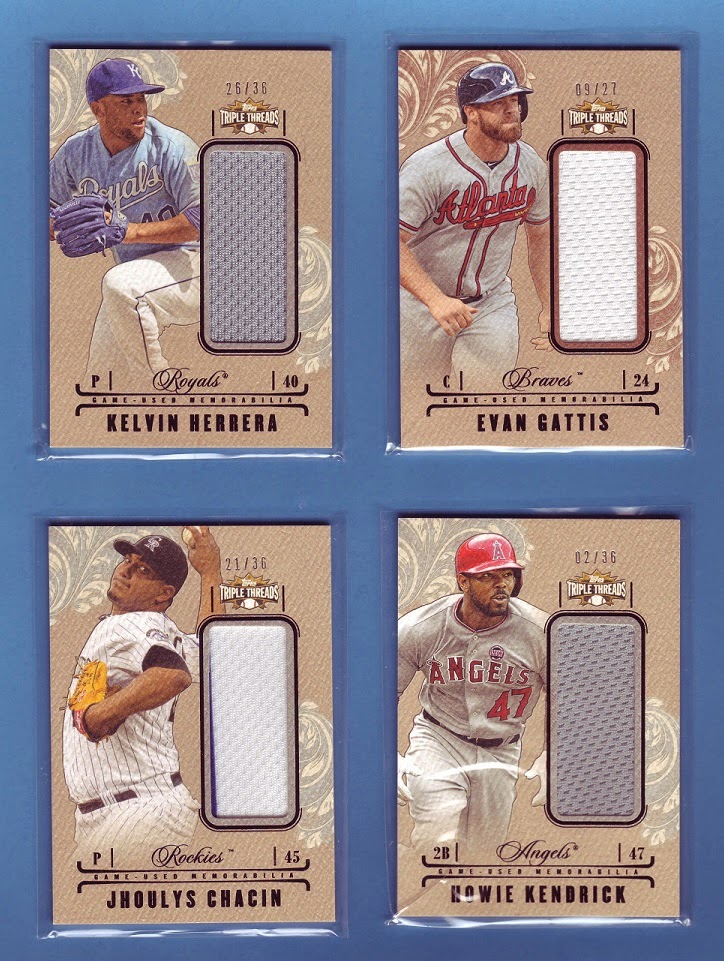 To be honest, I don't know too much about these four men.  Ok, I know NOTHING about them. But what great-looking cards!  I could look up their stats etc but at this point in my post, the lazy bug has kicked in.  It's past dinner time.  I should take an evening walk, a shower and a nap before bedtime.

Lest I forget: THE TONY, Greg, Adam, Jared, Robert and Nick - little packages for each of you hitting the mail tomorrow.

Thanks for reading!  I'm outta here! 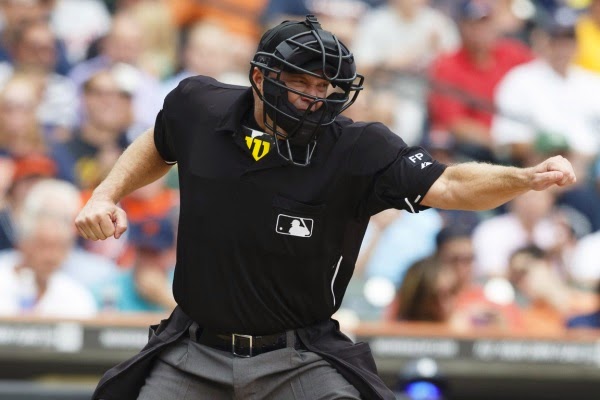 1997 Collector's Choice Stick Ums - a brightly colored 30 card set. The Big B Online says these interactive reusable stickers could be used to create mini baseball scenes.  What would we do without the insightful reflections of Buckett?  But I digress...

Tony - THE TONY - recently offered some of these little charmers to his readers.  The kid in me couldn't resist the opportunity to add a couple of these to my player collections. 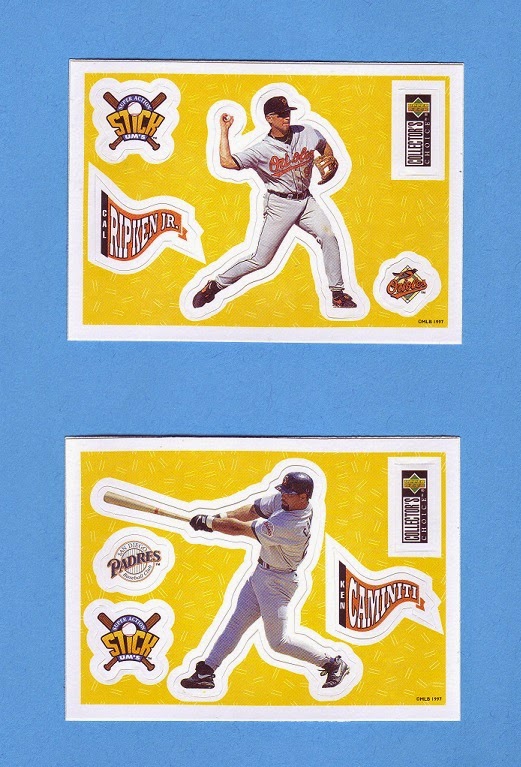 Cal Ripken Jr - class act, standout guy. Everything that could be written or said about this man has been, yet I keep typing...  He is one of the first players I paid attention to when I fell in love with the game.  The only thing he ever did to disappoint me was retire.  I doubt I'll ever have a majority of his cards but this gem is one more off the list!

Ken Caminiti (d. 2004)   I've always been a bit drawn to him.  Steroids, drugs, and alcohol - Ken was a troubled man. I can't pretend to know the struggles of the addicted. Yes he cheated the game.  He also cheated himself out of many good, living years.  I do keep a few of his cards around.  He had beautiful eyes. 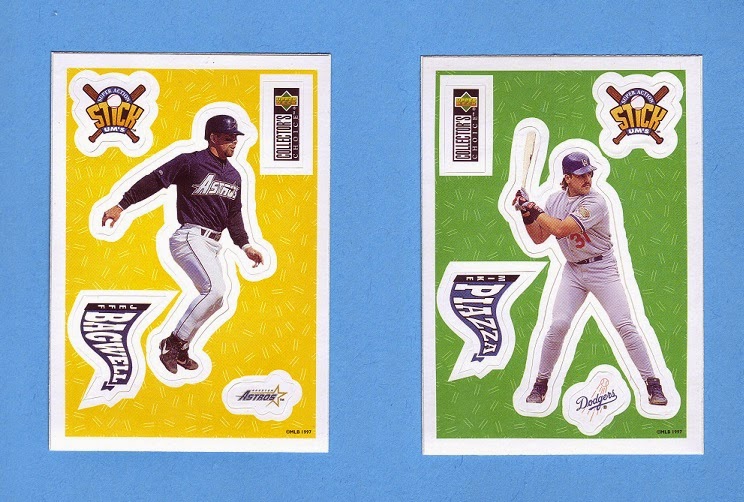 Jeff Bagwell - lifetime Astro. Lifetime numbers:.297 average; 2314 hits; 449 homers. My only trip to the Astrodome in 2001 witnessed his first career grand slam.  I'd like to see him in the Hall.

Mike Piazza -  His was one of the first player collection I began in 93.  One of his more memorable moments at the plate came on Sept 21, 2001, shortly after the 9/11 tragedy. The Mets were battling the Braves for playoff rights, trailing by 5.5 games.  Mike hit a mammoth home run in the bottom of the 8th inning. The Mets went ahead 3-2, winning the game. Although the Mets didn't make the playoffs, this brief moment in time gave the hometown crowd a much needed emotional release and cause for celebration.
. 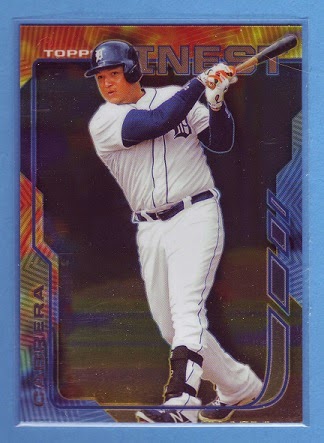 I really like the colorful style of the 2014 Finest release.  This scan doesn't reveal the metallic glory of Miggy's follow-thru.  What a great card!  I may attempt to pick up the set on eBay if I can find a good deal. 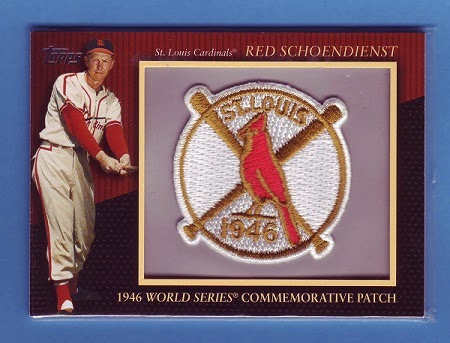 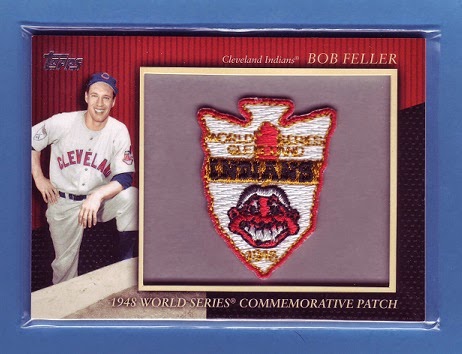 Thank you again Tony, for another fun trade!

Hot dog, you ask?  No.  In the mood for something sweet today.  Let's take a little trip back to 1987 for some air-brushed fun:  M&M's Star Lineup, 24 cards issued in 12 two-card panels.  I believe these were found in large M&M bags, one panel per package.  These cards are clean so either the candy coating doesn't stain or cards were wrapped.  I'm unable to find more detailed information. 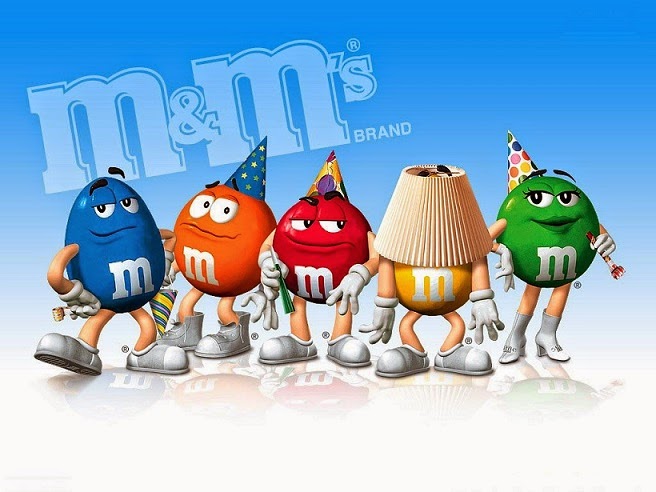 The Sportscard Bible offers this:

The cards were printed in perforated pairs which measure approximately 5" by 3 1/2"  The players are shown without team logos. (I would not have known this. Duh.) The cards were designed and produced by MSA, Mike Schechter Associates. (The guys who brought us cards in sausage and pizza packaging. MSA = NMF ...not my friends.)   The values for panels intact would be valued at 25 percent more than the sum of the two individual players. (Yeah throw in some math on my day off.) 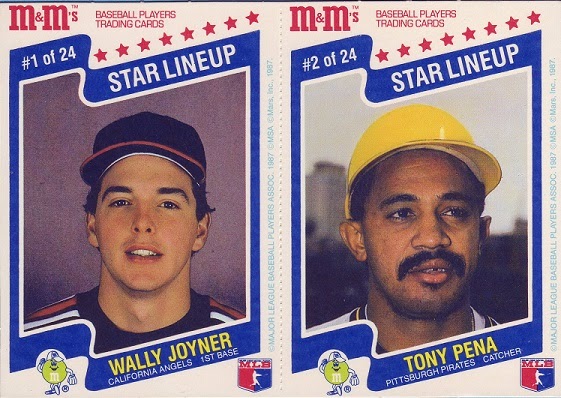 Wally does NOT look 25 here.

Tony is supplementing his income with after hours construction work. 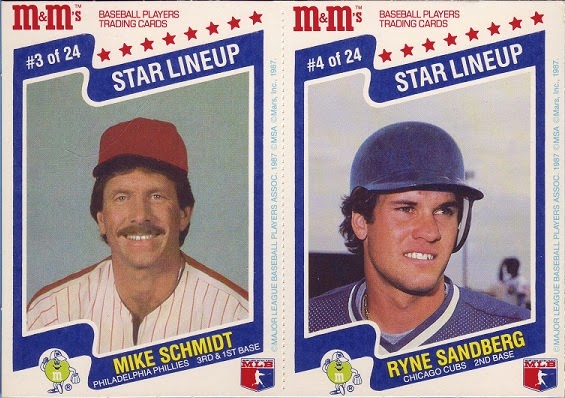 Mike's card is terrible.  His poorly edited hat
appears much too small, cut and pasted to his
head. Fun fun fun!

Ryno - I'll say nothing tacky about my fave Cub.
But this shot...well there are worse backgrounds.
See next card. 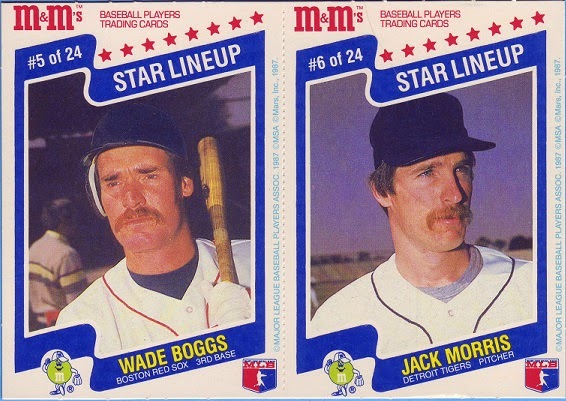 Jack, dropped off in the middle of nowhere for his photo opp. 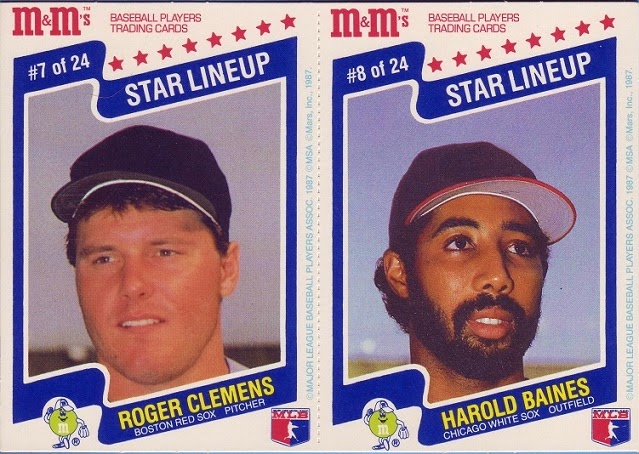 Harold's cap is outlined in red to match the brim. Such fakery! 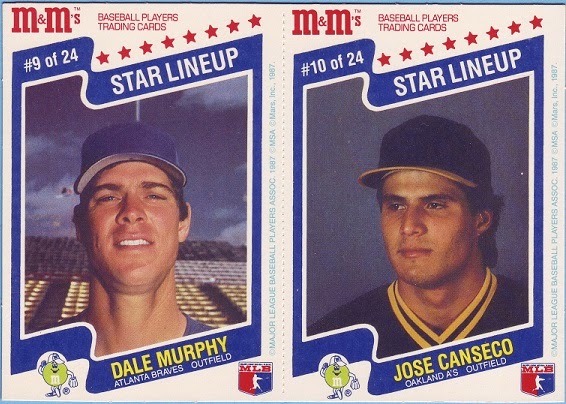 In a dark and moody moment, Jose ponders his future. Perhaps, he thinks to himself. Perhaps I'll write a book. 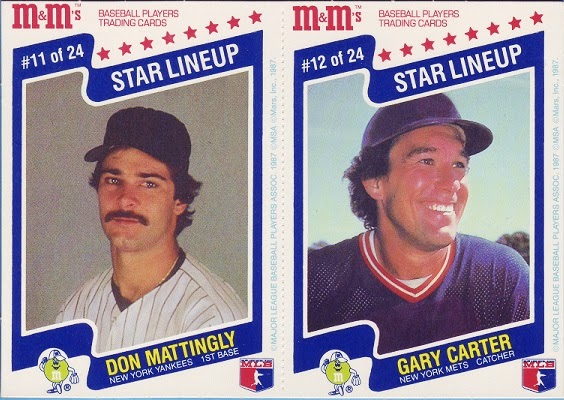 A glassy-eyed Donny Baseball, up early for his
yearbook picture. Showing off his favorite carved up hat! 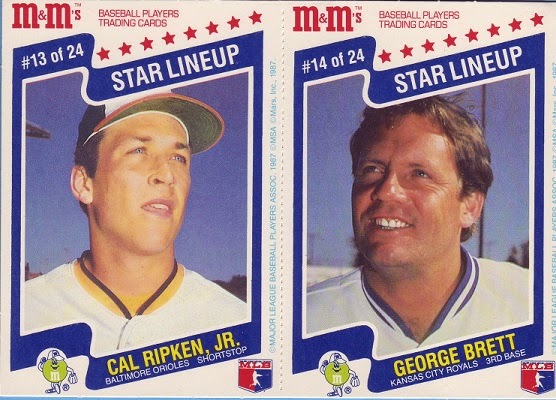 Cal is looking a bit jaundiced after a last place 86 Season.

In 1988, George Brett will finally make it to first base.

Panini and Friends take notice: this pairing is a good example of card design w/o logos.  Hide the hat, or take it off. 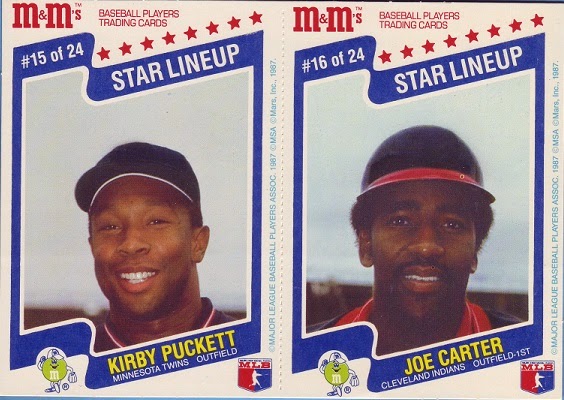 Sweet Kirby. Lots of space where your hat once was. Eraser happy editor. 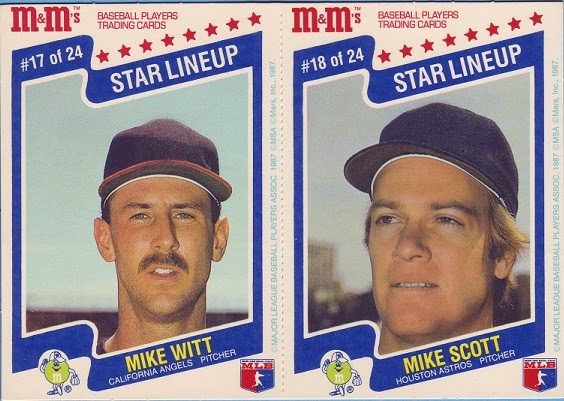 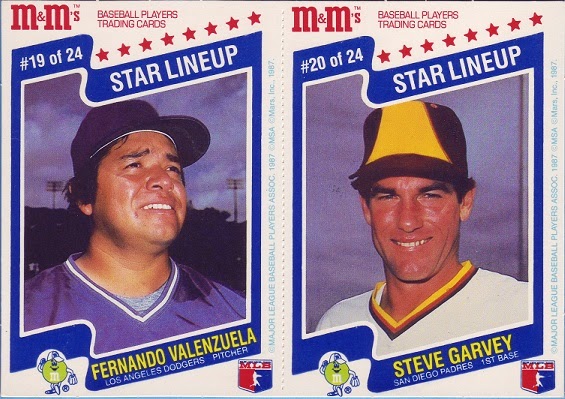 Garvey spent his last five years playing with the Padres in this ugly hat. Where is that eraser?? 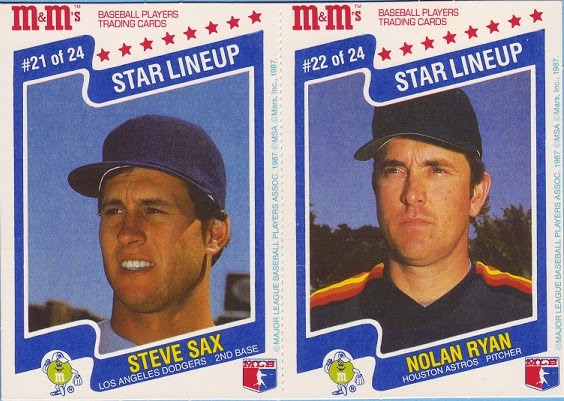 Steve - looking good in his logoless blue lid. TV cameo king from the Simpsons to Sean Hannity.  One more reason I don't watch much tv... 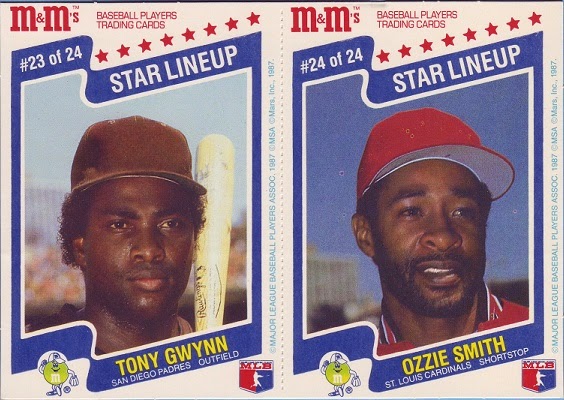 Tony Gwynn - stole five bases in one game in 1986 and won his first Gold Glove.  Not long gone from us. Hats off to you!

The Wizard...played the last half of 86 with a torn rotator cuff. Tuff Stuff!

Well, there you have it.  From the little candies that melt in your mouth and not on your cards!

The PWE: Lessons in proper usage

I have mixed feelings regarding the plain white envelope.  It's a perfect mode of transportation for bill payment or an old fashioned HWL (hand written letter.) I've received a few eBay wins in PWE form.  One could expect a single card to arrive safely. But five cards?   Unsleeved cards in taped-down top-loaders = one PWE??  Yes shipping was free. The seller had great feedback too. 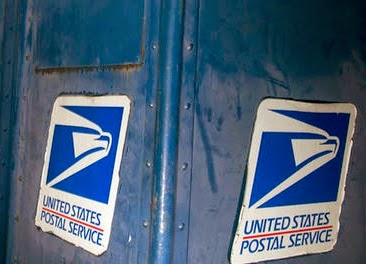 I worked for the USPS for 15 years. I understand automation. Stamping hand cancel on an envelope has been pretty ineffective for 30 years or more now.  A possible exception would be to use the service window at the post office.  But once the letter is added to the mail flow, machines do the sorting. I don't blame the postal service.  I fault the packaging.  From the many blogs I read here regularly, PWEs are quite efficient for trading with minimal mishap. Fortunately the cards arrived at their new home, happy the journey was over.

This bird has flown 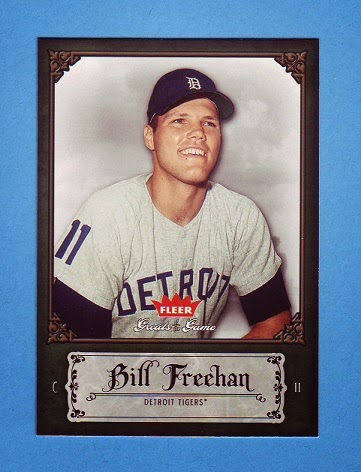 These cards have green borders.  The scanner wasn't feeling well and chose them and this moment to express ...BLECH!  Yogi front and Murcer back suffered some tape damage. SUPER pet peeve!  Please tape a soft-sleeve over the loader.  It's not rocket science. Tape is sticky because it's TAPE!

Any words of advice out there from PWE experts?  The USPS sincerely regrets any damages. 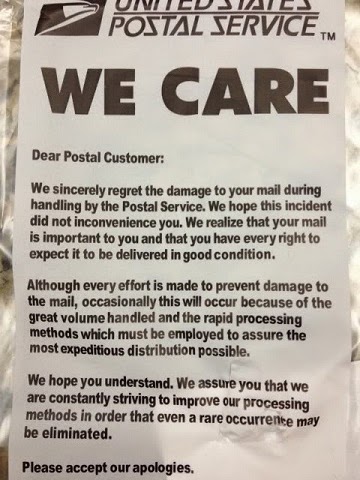