PSA: Adding a Big One to the Collection

Today's PSA goes out to a couple of bloggers I intended to thank in my previous post. Matt with Diamond Jesters offered recommendations for the Lenovo I was pursuing regarding the drive and processor.  Steve at 1975 Baseball Cards and I exchanged several emails with tips to modify pre-installed software and walk me through some techy steps over my head.  Thanks much guys! What an awesome community we have! I'm grateful to be included among this group!

Gainfully employed again, it's safe to spend a bit more freely. Though I'll be making less, the benefits of  working so close to home freed up funds!  I'll use less than 5 gallons of gas per month! I was filling up 4-5 times monthly at an average of $40 per! A card I once thought unobtainable is now a permanent resident! No sense in dragging out this announcement.  Please meet Mr. Tiger, Al Kaline  in his 1954 Topps card debut: 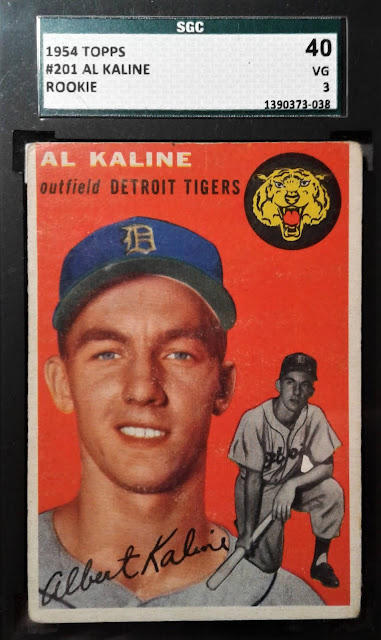 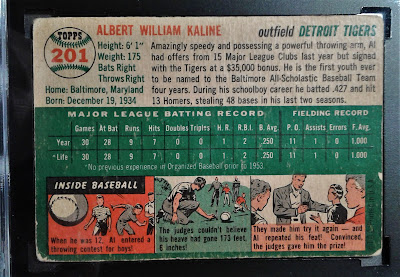 It isn't perfect, which would truly make this card impossible on my budget. The number of graded cards I own can be counted on Three Finger Brown's right hand. The card being graded gave me confidence to know this Kaline is authentic...and the price was right!

It presents well with no creasing plus good centering and color.  While not PSA, SGC is a well respected vintage grading company. Most importantly, I look at this card and see Mr. Tiger in all his youthful glory, hitting and fielding his way to the Hall of Fame. It's a sweet addition. Only three Topps cards from his playing days are missing from the PC: 56, 66 and 75.  The 71 needs replacing.

While I have your attention, I want to show off another addition  - this one to my bookcase. It's a rare occasion when Ty Cobb isn't the main focus of my Tiger collection.

TCB On the TCDB

Let's breathe a little life into this blog while the time is available! I've stopped, started, and edited this post  several times. While I've had a new Lenovo laptop for nearly a month, until two days ago it hadn't worked properly. The first week, it wouldn't stay connected to wireless while running on battery power, even after modifying battery settings to maximum performance. I worked with a Lenovo tech who reinstalled the Realtek wireless driver. My problems were solved for about three days.

Windows did an update which corrupted the Chrome browser and created other issues within the machine. I decided to reset the machine to an earlier date. I only had two choices so used the later date with the working wireless. The machine crashed. It would not reboot into Windows, only the blue screen of death. I'd invested a lot of time and money in this laptop and wanted to cry.  I had only one option - reset it to factory mode. This worked but then just a few days later, the wireless problem started again.  Reinstalling the driver didn't work this time. I got online and found a more recent version of the driver and installed it myself a couple days ago. This laptop is finally working as it should.

And I will be too - beginning Monday!  I HAVE A NEW JOB! FOUR MILES FROM HOME! Within two hours of interviewing Tuesday, I had an offer.  I'll be working for a company that applies protective coating to metal components, mostly for autos. The office is small, no more than five persons at any given time. It's just what I'd hoped to find: 8-4:30 with an eight mile round trip commute. No busy roads or stoplights.  NO TRAFFIC!

So what have I been doing? I began this post on January 20th with these stats:

Although the login was created in 2018, I only set up my profile over the summer. I began inventory of my earliest binders in early January. Most contain cards from my hobby beginnings in the 90s with some 80s oddballs too. Adding these quickly boosted my numbers. I also took time to edit prices for many cards, lowering them somewhat. I began a wantlist after discovering some sets missing fewer than 10 cards, a few sets - only one.  How did I let this go for decades? 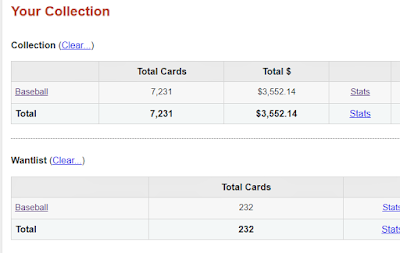 One thing leads to another. I went poking around, learning to navigate the site when I came across Features: 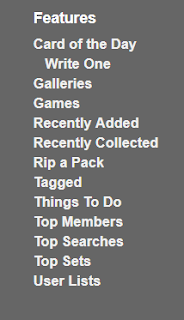 I just had to click on games. Mistake.  Within one singular minute, I was lost in Card Battles: 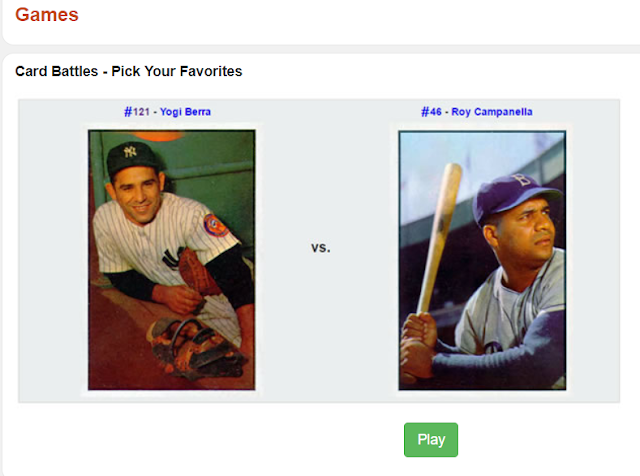 Faced with a nice Bowman challenge, choosing one over the other with nearly endless combinations, I lost a full hour of data entry right there. I finally extracted myself from this game but saw another link for Card-ology.  For freakin' Fleer's sake. 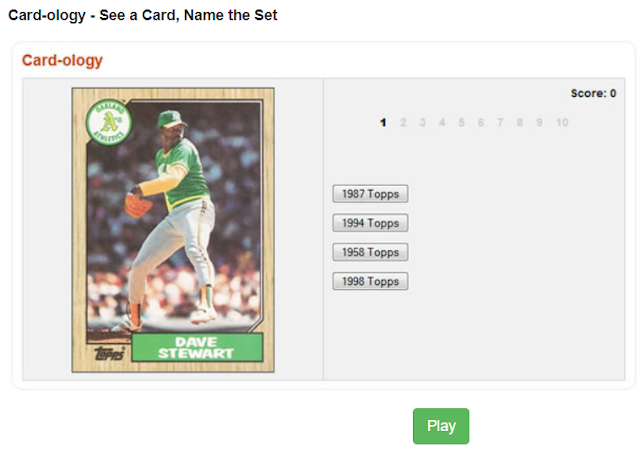 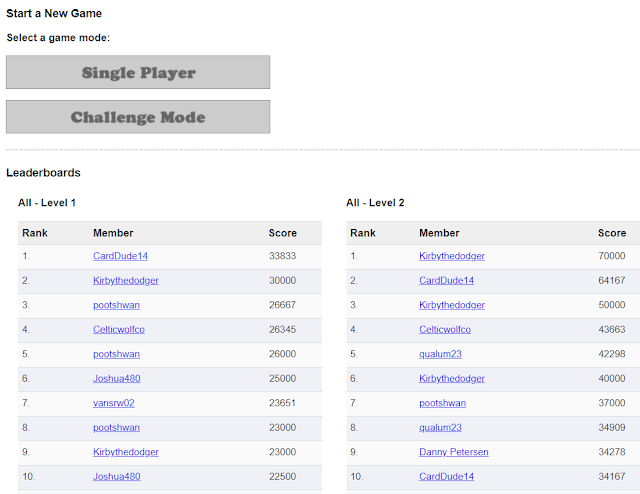 Recognize any of these top TCDB gamers?  My guess is they're also without full time work.
Since my last day on the job, I've boosted my numbers greatly:

Altuve and Old Ty are by far, my largest player collections. They share a 3000 count box which is nearly full. I'm saving them for last as a kind of 'reward' for my hard work, which is the reason these two vastly different men do not appear in the player list.

1994 ranks highest on this list because that year sucked my wallet dry. I came into the hobby in the fall of '93.  In '94, I thought I needed to buy every product that came out.

Though players were sorted into PCs, I had no idea which cards were owned or needed. I have been greatly impressed by the lack of dupes found while sorting cards by year and set. It is MY memory we're talking about here!  Here's one of the completely sorted and entered boxes: 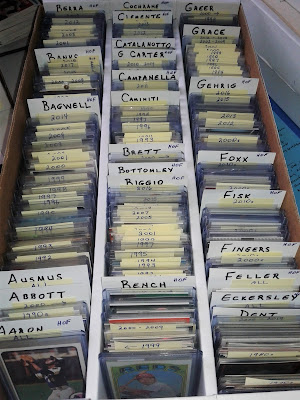 While there are smaller spots for Brett, Eckersley and others, I do not intentionally add to these collections. If I come across an appealing card, it goes into the box.  At one time, Catalanotto held a larger place but I've kept only ten of the 100+ cards original to my collection. These smaller lots are denoted by 'all' on the yellow tag.  HOFers are noted as such by their name.  Cards are sorted by year, and set. All are soft sleeved, with loaders reserved for vintage, relics, autos, refractors or numbered cards.

The old laptop worked well on the database, for that I was grateful.  I couldn't upload photos with it or surf the internet at any great length. Blog reading was difficult because pictures wouldn't load, there or on most sites in general. It's still good for a mindless game of Zuma or Peggle.

Thanks for your support and encouragement these past two months. I won't lie. Being off all this time has been nice. Retirement will be sweet some day, ten years from now.  Just maybe, by then, I'll have Altuve and Cobb in TCDB!