My First Break with Nachos Grande!

Make it yours too!

Chris of Nachos Grande is breaking a case of 2015 Heritage.   Twelve boxes with 24 packs per box and 9 cards per pack!  There are a lot of good slots still open.  If you are interested, you can find details of the break here.

Available Slots:
"...we should expect at least 32 hits in the break - plus a ton of other Heritage goodies including inserts, chrome parallels, and even short-printed image variations!  Both Heritage and Clubhouse Collection offer the chance of some great relics and even some great autographs!  I'm hoping the inclusion of the Clubhouse Collection box will add a bit of intrigue and excitement to go along with what should be a fun Heritage case to bust!"   Nachos Grande

$50 covers your cards and shipping!  A full case break should bring more than your team's base cards. You can bust your own $65 box and be disappointed - 2014 Stadium Club...
I am quite excited to do this first break with Chris! 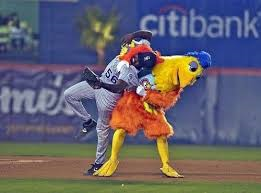 He is  pretty brave after all, trading with a cracked bat.  Johnny's Trading Spot sent a fat package of cards in mid-December.  I came home from holiday in January to a generous offering of Conlons and Tigers!  He sent a USPS priority box filled with a couple hundred sweet pieces of cardboard.  It was my first trade with John.  I'm so sorry it's taken so long to share some of these cards with all of you! 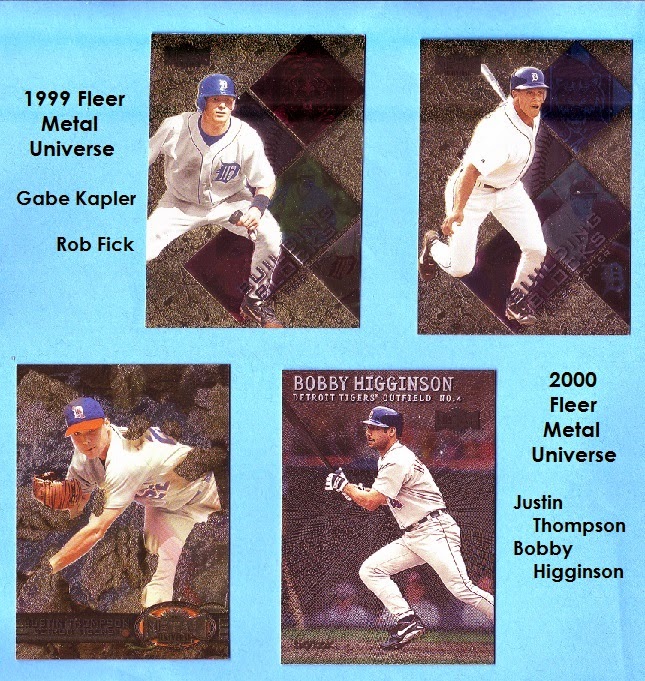 I have yet to learn the art of scanning foil cards in a way that reflects their often colorful designs.
Here's a snapshot of the Justin Thompson card which shows off a bit of the 3D design.
﻿ 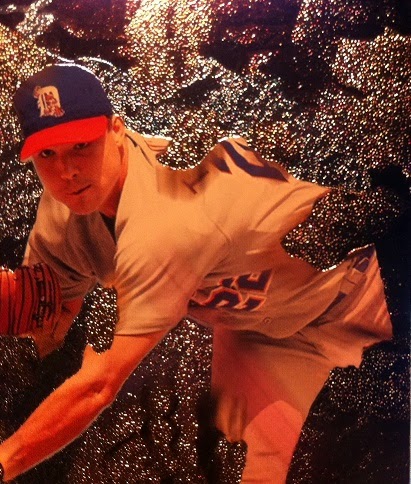 Studio became a regular addition to my collection beginning with the full bleed issue of 1993.  These cards are from 1992, and 1991 respectively. 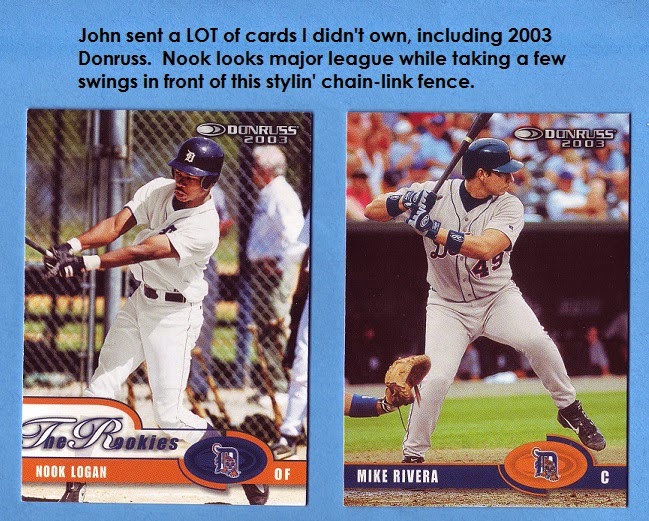 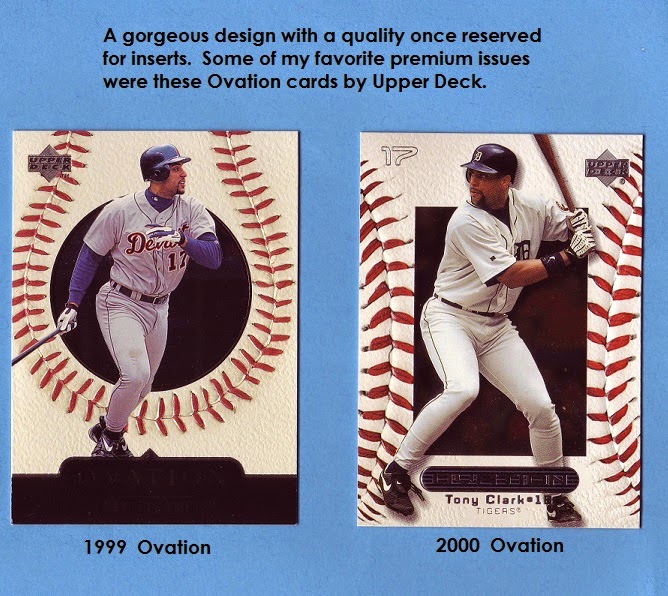 2013 Topps Archives Doug Fister and Austin Jackson.  I am among the collectors who find Archives irritating and perhaps unnecessary especially with Heritage already regurgitating classic designs. The 1972 design is among my top Topps.  I truly appreciate trades that include my Tigers on these newer issues as I don't purchase more than a random pack or two.
﻿ 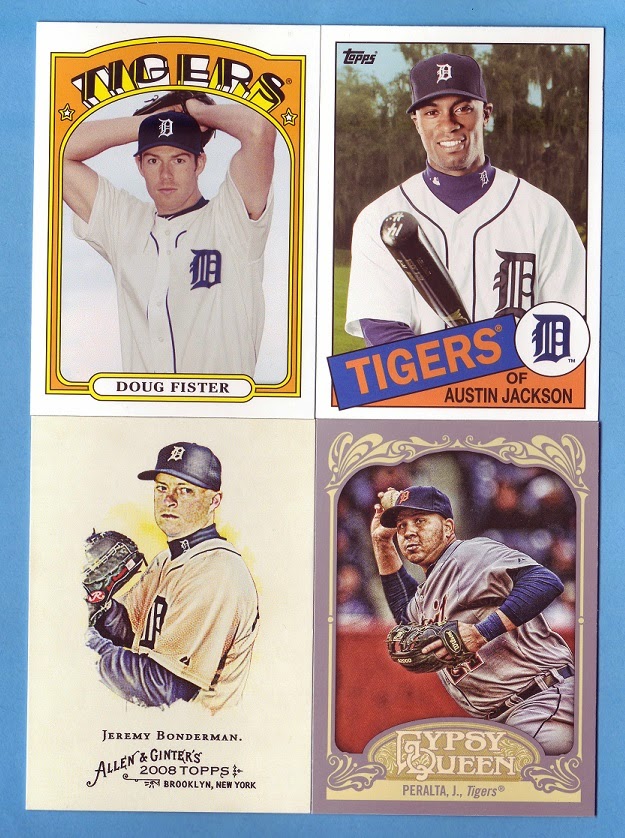 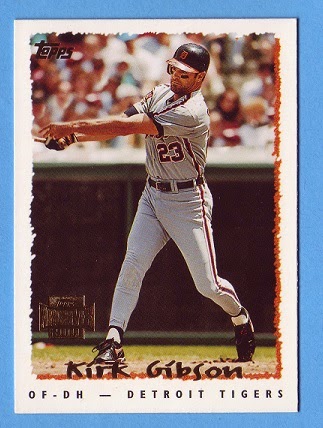 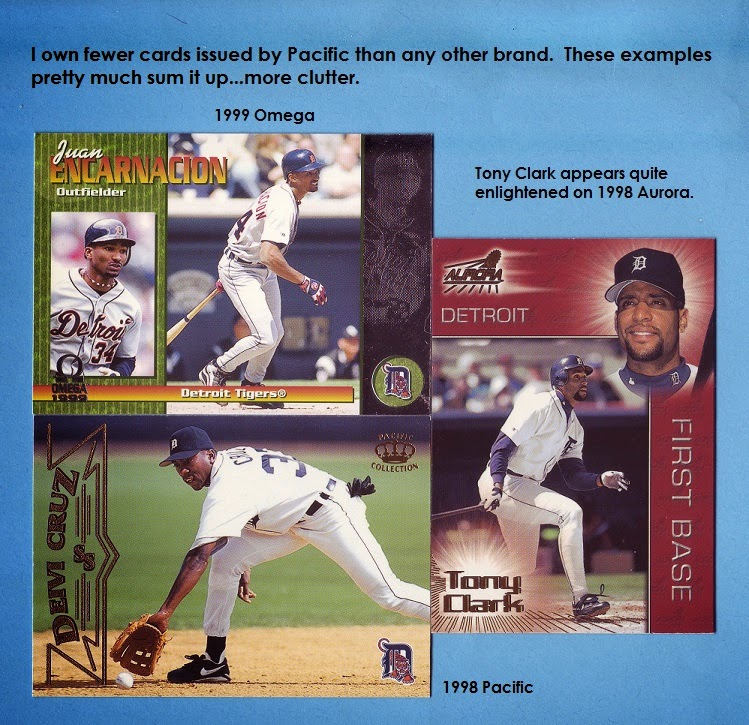 John included a rather large stack of Conlons which I'll share a little later on.  I was elated with the number of cards he sent.  I had a lot of fun going through these and could only share a small amount here. I appreciate the generosity!!!  If you haven't read Johnny's Trading Spot, do check out his blog.  He's a Braves fan and John Elway collector.
Thanks for your patience!  You helped complete several older team sets. I'm saving Braves for you, John.
Posted by acrackedbat 1 comment:

Is the one you love giving you the brush off?  Are you pining? Were you kicked to the curb? Sent packing?  I have a few cracked cards just for you with no guarantees to heal your achy breaky heart!  Perhaps these cereal prizes will put a crooked little smile on your face.

I've begun hoarding Kellogg's cards thanks to Jedi Jeff's recent donation.  He sent me over the edge with a nice stack of 1983 cereal stars.  Now it's eBay, COMC - whatever it takes.  These random purchases often come with a dupe or slightly cracked card. You'll find a few fellas who played hard, hardly played or never had much of a MLB career.  Mostly from 1980 and 1981 and scanned large to show their flaws, here they are in 3D glory: 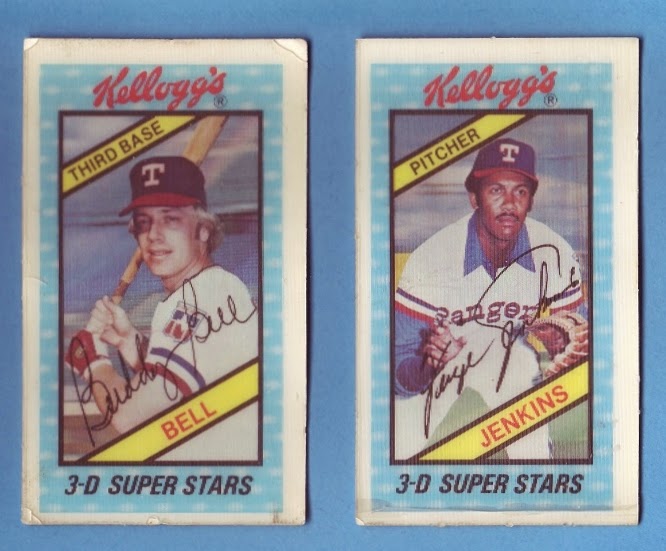 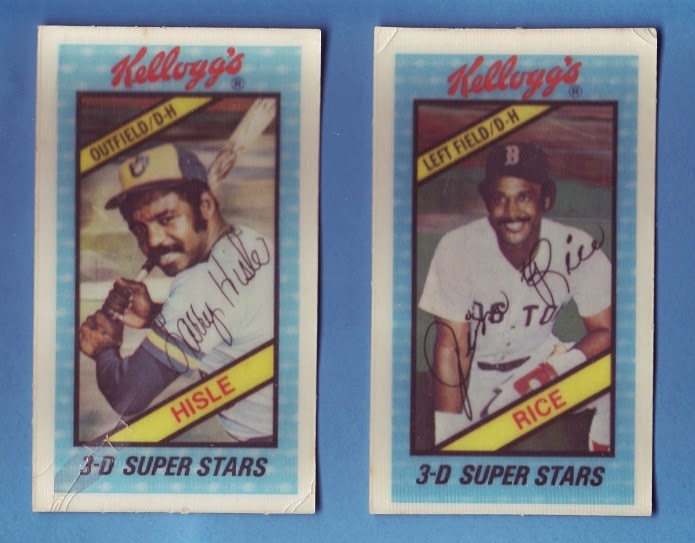 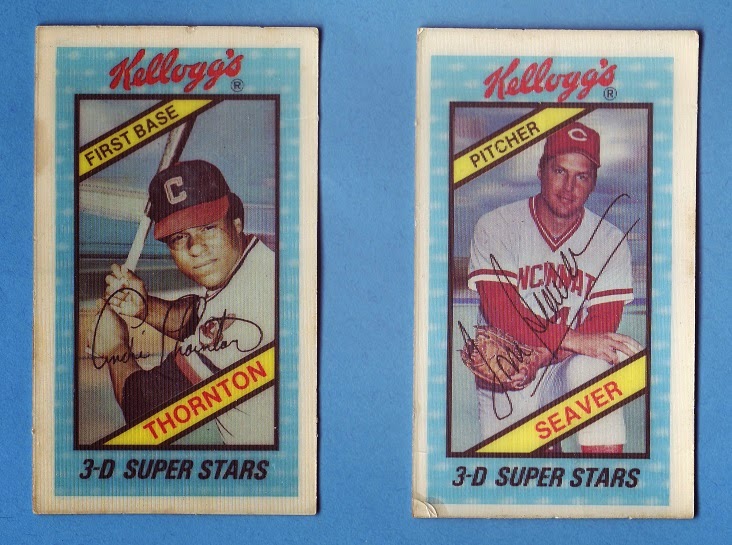 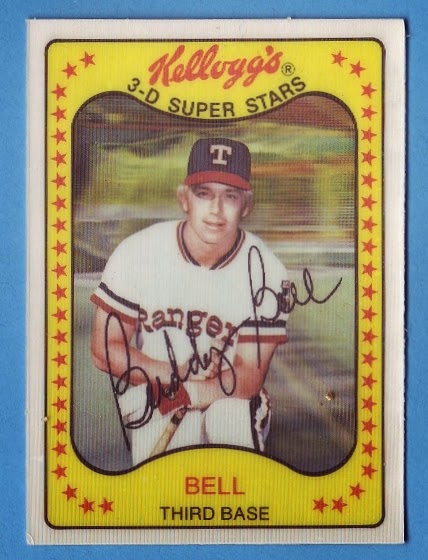 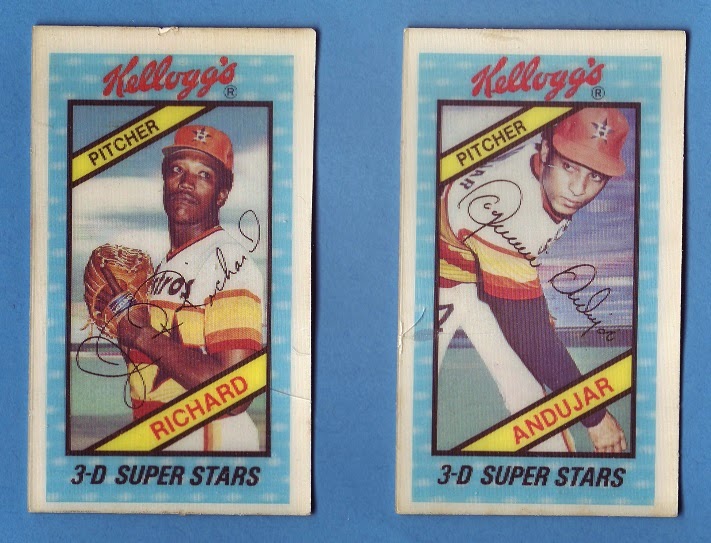 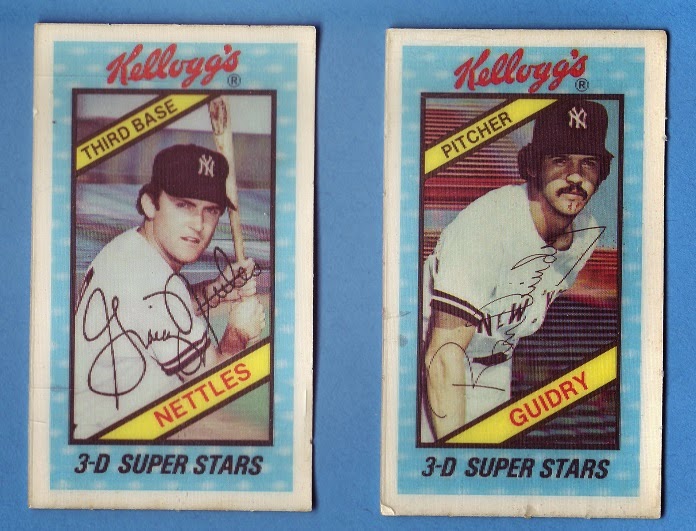 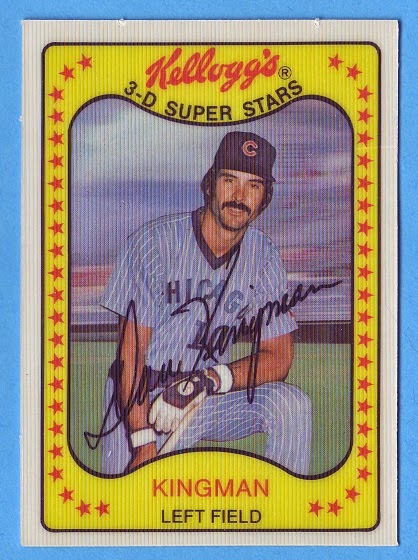 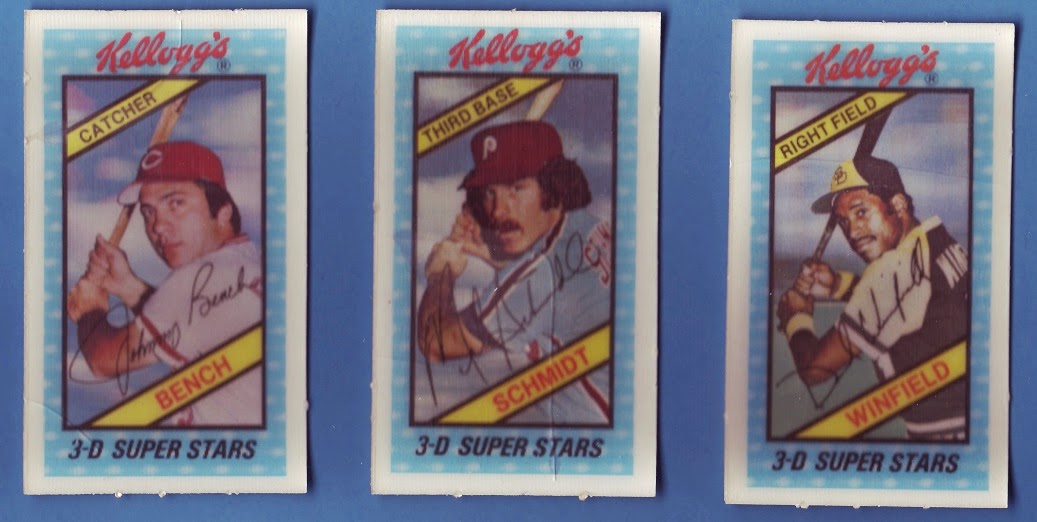 If you want a couple of these cards, leave a comment to claim them and email your address to:
a  nospace cracked nospace bat atttt gmail dotta comma.  If we trade regularly, I have your address of course.

If you want all of these cards then you are selfish and quite deserving of a lonely Saturday evening.  Wait.  That kinda describes me - the hoarder.  Oopsie.  If you think these cards aren't good enough for your collection, then you are judgmental.  It's pretty clear why you were ditched. Wait. Me. Again.  I am the one pushing these off on you.

Could it still be Christmas? I have three more holiday trades to share and four that arrived after the new year began.  I have a handful of regular trade partners.  Fortunately they are all patient fellows!  Most everyone knows Nick and his Fabulous Dimeboxes.  He has the natural ability to take any random common and write a superb essay regarding its importance to the hobby.  He's caused me to want many of these cards in my own collection.  This is a fine example: This is a classic card which I did not yet own.  Gary is holding his own 1989 UD, card 117.  Cleanly photo-shopped or a moment of psychic foresight? The image on the card he holds is the backside of 117.  Eerie.

I like quirky little sets like the KMart Topps, represented by McLain.  A true blue light special set!

I'd forgotten Nomo pitched for the Tigers.  I'm still not over his disastrous time with the Rangers.  Sandberg taking it to the shin on this 2011 Topps Lineage.  I'm liking this set more all the time.  It would've made a nice design for the Flagship Topps. But no-o-o-o-o-o...  Finally we're getting gaudy with the gold foil on 97 Pacific Collection Jose Lima.. 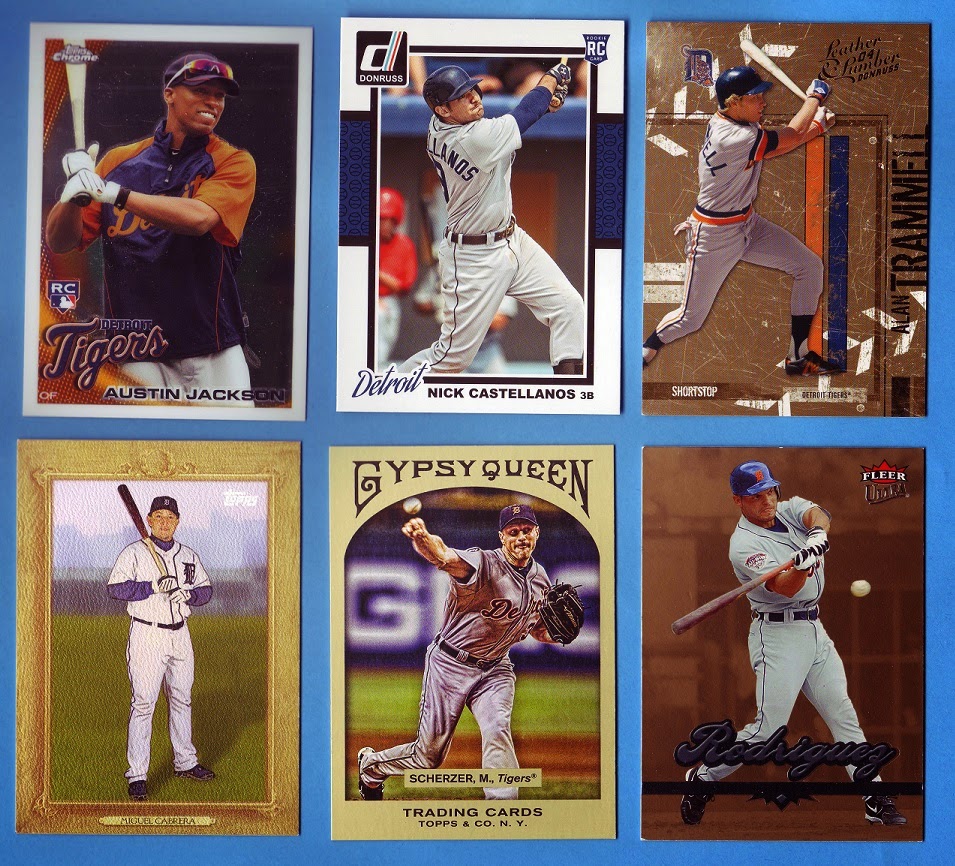 Great Tiger representation here!  I was excited to find a Castellanos rookie! I was not excited to lose Scherzer to the Nationals.  I hardly know the team posing as the Tigers in 2015.

Can't have too many Stadium Clubs from any year. This Doherty is from 1995.  Swell Gum from 1990 is everything a gum card should be: colorfully designed with fun-sized font and a star player ready for a home in my binder!  I'm actually working on a want-list for this set. 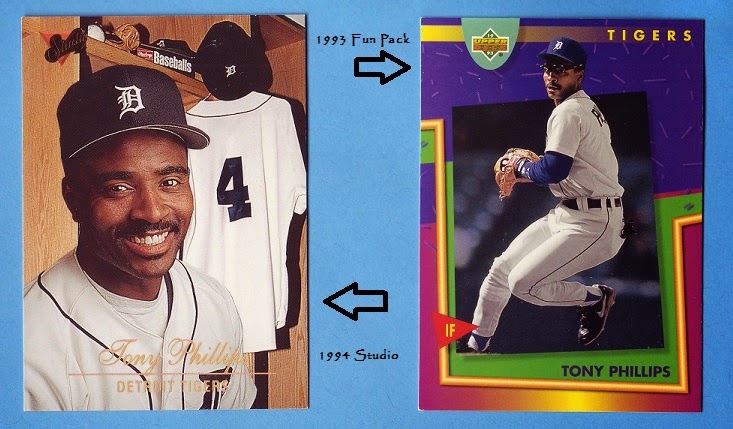 Donruss Studio of the 90s created some of my favorite designs.  I'm picking up sets from Ebay - 94 Studio is on the list.   I have a set of 93 Fun Pack.  It may have catered to the much younger generations but I love the wildly colored fronts. 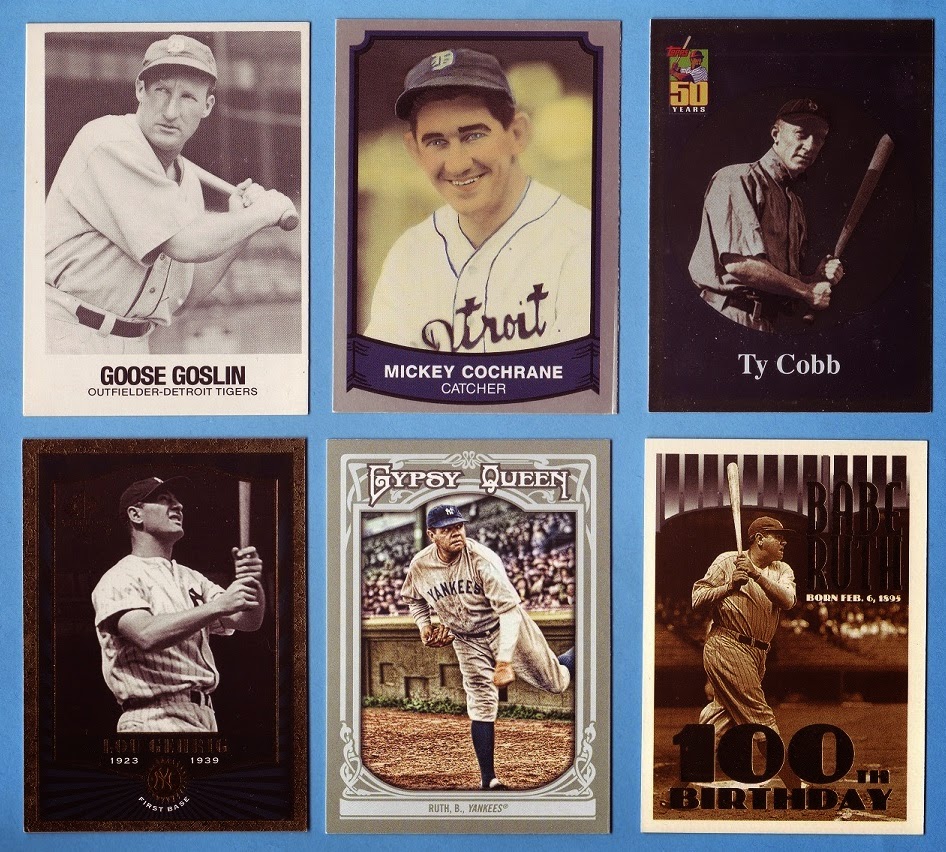 A sweet lot of old-timers!  Cochrane looks much like a star of the silent screen on the colorized Baseball Legends from 89 Pacific.  Ty scanned darkly but is quite shiny on the foil card from 2001 Topps. The Gerhig and Ruths I did not have.  Goose Goslin from the Renata Galasso collection is another cool addition.  Renata was a savy business woman, leaving me and many others wanting more of those Galassos! 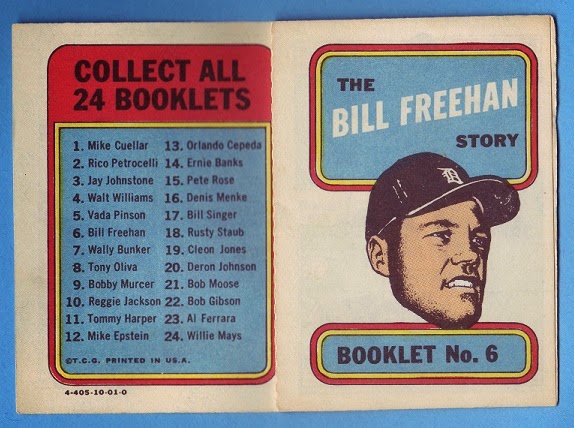 This little eight page prize is a 1970 Topps Booklets, number 6.  Collect all 24!  In excellent condition, likely read no more than a few times, it's bursting with color on the inside. 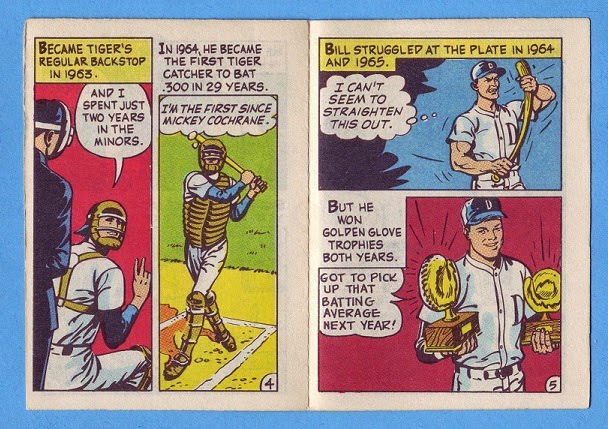 Harvey Kuenn, Hal Newhouser and Charlie Gehringer on 2005 Upper Deck Classics.  I love the old guys!!  Is it wrong to love men twice my age, and possibly deceased? 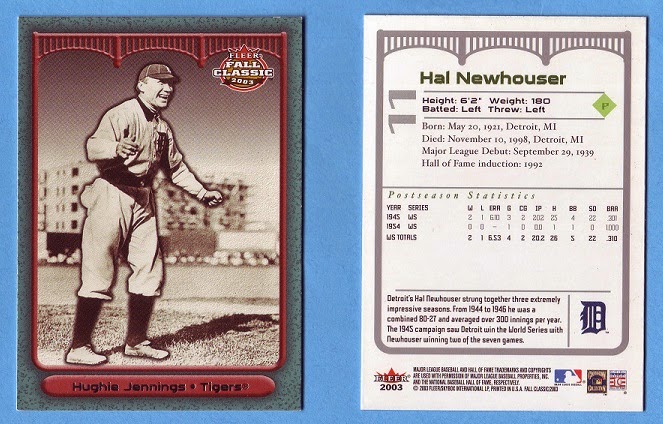 2003 Fleer Fall Classic.  The scan doesn't reveal how attractive these cards are.  I like the stadium-styled framing along the top border.  Jennings appears almost ghostly in this picture, or is it ghastly? Monster-like. Either/or.  I like the cards.  I'm the decider. 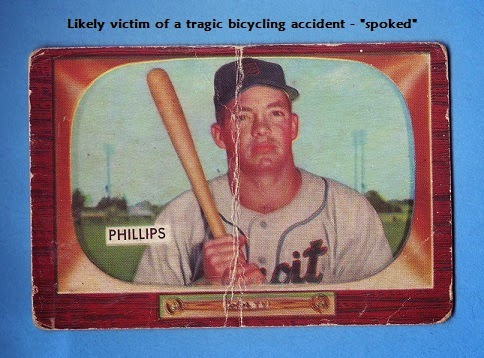 Spoked or perhaps an early wallet card, this gem is welcomed to my collection! I owned none before Nick's package arrived!

Nick chooses well.  Cards from several decades, all so different!  He also included a very large group of Conlons which I'll share at a later time.  It is hard to pick a favorite.  It may just be this one: 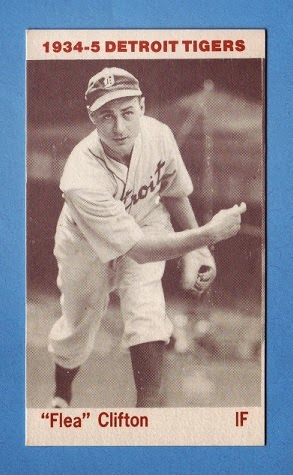 1974 Tigers TCMA, tall and slender.  Herman Flea Clifton appears to have had a very short tenure with the Tigers.  Over two years, he compiled a .255 avg in 110 at bats.  I love the name, and the card is certainly an oddball.

Nick as always, you are a superb trading partner, a true Dime Box hero!  Thank you!
Posted by acrackedbat 9 comments: