As the unpacking continues, I've noticed a pattern. It appears I hit the hobby head-on and clueless in 93. It was my rookie year as a collector.  Looking over the list on the left, it is quite evident I had no idea what I was doing.  I became an instant Topps snob when I realized I could pick up a factory set. It appealed to the lazy side of my personality.  So lazy, it bubbles  beneath  the surface at all times.  I decided to assemble my first set, 1993 Donruss.  I knew nothing regarding collation or that it would be nearly impossible. I began with two 36 count boxes of Series 1.

Silly me.  It's a big set with 396 cards in each series.
Of course, I'll need TEN boxes to complete a
series one set! And guess what?  After ten boxes,
I was still short a couple cards for one full set. Dupes
galore! (At this point, I still knew nothing of trading for what I needed.)  However, in the course of opening 360 packs, I discovered inserts. How cool...and not so much.  I'm a finisher and  now  obligated to these little insert sets.  Looking over insert ratios, it's hard to understand how I could only pull Diamond Kings and Spirit of the Game.

Series Two, I'm not intimidated. This set-building episode was not going as planned. (I hadn't really planned anything.)  I don't recall how many boxes of  #2 were purchased, or perhaps I've blocked it from memory.

I eventually found the cards needed to complete these sets.  I realized this was part of the hobby fun and decided to embrace the chase.  I'm not so sure there's an explanation for
1994.  By that time, I was hardcore collecting.   Referencing the list once more, we can see I attempted to build too many
sets.  (Only completed sets have been added to My Organizer.)

Naturally I felt obligated to Donruss after spending 1993 together.  The design was now full bleed and gorgeous. Of course you're forgiven Donny. No apology necessary.

However there is this
ONE little thing we
should discuss.  What
do you mean by SE?
Special Edition?  Oh yes
I can clearly see it's special, with
the foil on front and stamped on the reverse.  Parallel set you say?  Betrayed.  Yes, it will be completed too but there will be no 1995 for you Don. Duped again.

Slow to learn a lesson, I finished seven main sets in 94 - along with a few insert sets.  1993 wasn't all bad.  I made a couple of nice decisions, completing first year issue Flair and SP (which I need to add to My Organizer.)   Moving forward, I would complete fewer sets and focus more on player collections. Too many card issues to choose from - variety is not always the spice of life. I enjoyed buying a few packs of most everything. As prices escalated, the fun dissipated. 12 years would pass before I bought another pack.
This time it was the new Godfather, Topps.

I doubt I'll purchase a lot of new stuff, though I'd be lying
if I said I wasn't interested in the upcoming return of $tadium Club. I love inserts but the hits  were never that important to me anyway.  These have  driven up prices.  As we know, players don't sign for free.  At the end of the 90s,  I discovered true vintage cards.  Tobacco era through 1979 - cards that hold my interest now.  100 years of cards to discover and collect. I kick myself for not scooping up boxes of Conlon Sporting News Collection in the mid 90s.  I saw these everywhere and wasn't interested.  While not vintage, these cards are an inexpensive introduction to baseball's colorful history.

I have a little (step) grandson now who'll be six in the Fall.  He just played his first Little League season. T-man loves baseball and recently discovered cards.  I need to make good collecting decisions because he will inherit all of it!  I only hope he can forgive me my rookie season. I struck out a lot!

Looking through these boxes, I came across the player who contributed greatly to my growing addiction.  I'd always loved baseball, even as a kid.  I remember watching weekend games with my grandmother and my interest in one Bucky Dent.  Crush.  Well, I was a kid after all.  I outgrew it.
Enter the 1993 World Series.  After my introduction to cards, my interest in the game itself was renewed.  Just in time to discover the Phillies...and Darren Daulton.  He certainly wasn't perfect.  Dutch fought demons during his playing years and a few since retirement.  He's shared a few spiritual ideas which seem a bit quirky but upon closer examination, harmless.  Darren's given back to his community continually and he remains a Philly favorite.  But I digress... 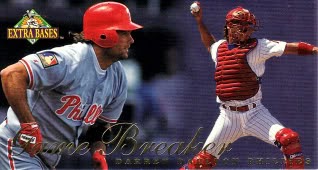 Darren - who was this guy? The chiseled features, great hair.  I suddenly couldn't get enough of his at bats.  I must have all of his cards.  But I was through collecting.  I'd completed my first and last set with UD 93 Then and Now.  Well, it will  be fun.  Just get his cards, and only his.  That's not fair to the rest of the Phils though.  Perhaps I'll do a team set too.  After all, he didn't get to the World Series alone.  Dang it Joe Carter! My Philly dreams crushed.  Who are you anyway?  This card says you're an Oklahoma boy.  I'm from Oklahoma too.  Cool!  I'll collect your cards and maybe those of other players from the OK state.

﻿﻿﻿﻿﻿
Hello, my name is Cracked Bat and I have a cardboard problem. Yes, a problem.  I can't find Daulton's autographed insert card from the 1994 Ultra set!  What?  That's not a real problem?  What's hitting bottom?  Does that mean the last pack in a box? Leave? You want me to leave? Come back when I can take the program seriously?

Collectors are sometimes their own worst enemies...
Going through my Daulton binder, I felt the urge return to chase down the remaining cards needed to complete the collection.  It had been years since I'd looked Dutch up on the net. To the trusty Google search bar I went. CANCER??   Darren has brain cancer??  My heart sank and eyes welled a bit with tears.  This can't be true.  He had surgery a year ago for a tumor. The cancer found was diagnosed as a glioblastoma.  A difficult cancer to treat as these tumors have tentacles which can leave malignant traces even after a successful surgery. This article shares information on brain cancer and the many other MLB players who battled heroically and lost.  We do cry  too young  often, never do I hear too old.  Too old to die?  Too mean perhaps. I read the obits regularly and naturally notice strangers my age passing on from this life.  They will always be too young, even twenty years from now.  So yes, he is  too young.  I am too young. YOU are too young. Forever young - my theme song right now. 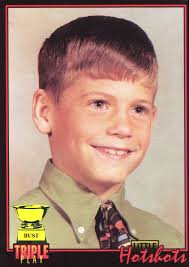 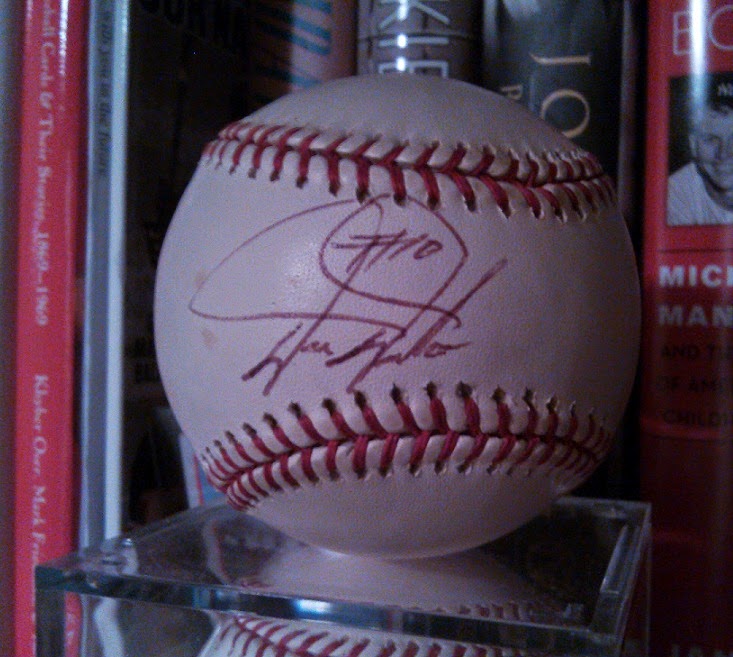 A Message to Dutch: my best wishes for a full recovery and a thank you. After waiting many years, my opportunity to meet you came at a Devil Rays/Rangers game in the summer of 2001.  After saying you'd sign a ball for me after practice,  I waited in the 100+ degree heat by the visitors dugout for an hour.  You returned to sign that ball, spoke with me for a minute and walked away, much to the dismay of fans lined up behind me.  Thanks for your positive attitude, your commitment to community, and the joy you brought into my own life. 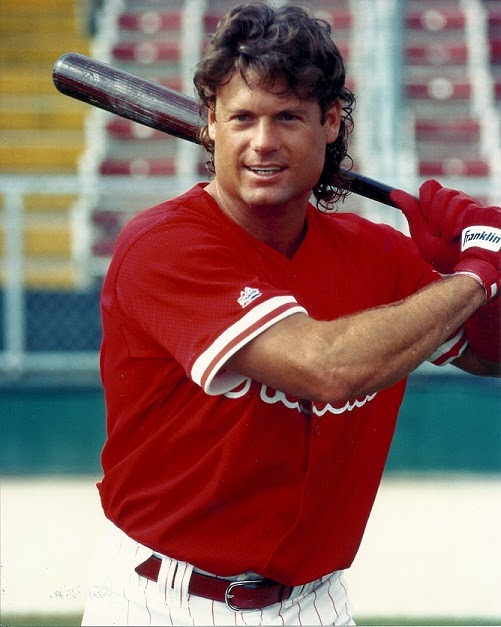 
Posted by acrackedbat No comments: