Michael Kaiser of Orange and Black Wax was kind enough to drop a few cards off via the Big Brown Truck last month.  He had a few extra 2014 Allen & Ginter's to share.  They were all of the Tiger variety, of course. 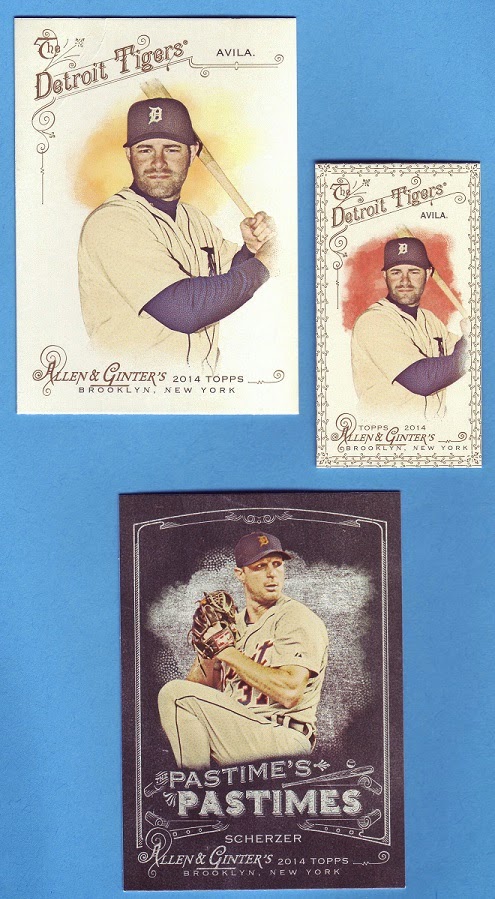 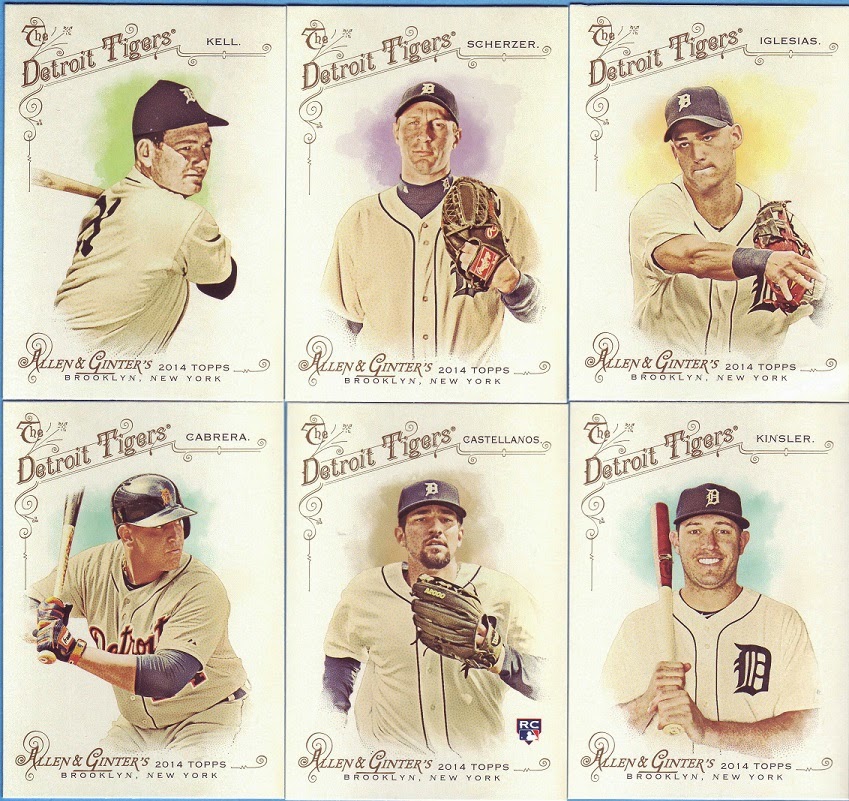 What a great dent Michael made in this team set!  I was left needing only the Newhouser, which oddly enough came as  filler  in an Ebay package this week!  Filler.  So wrong.

The self-proclaimed Kaiser the Great's blog has a humorous bent.  He hasn't posted in a few weeks, since the Giants won the pennant actually.  I didn't find any humor in that, by the way.

Michael, if you're still out there - thanks again!
Posted by acrackedbat 5 comments:

The Cubs Win the Pennant!

The Cubs in 2015?  Waiting 'til Next Year's P-town Tom is wishin' and hopin'.  He's a faithful fan through n through.  With the addition of John Lester to their rotation, it appears the Cubs mean business this year.  I'll be cheering them too!

Tom and I did a little trading recently.  I'm not sure how I discovered his blog, perhaps through Matt's Bob Walk the Plank.  Ryne Sandberg is one of my players. Not coincidently, Tom collects Ryne as well.  I went through his wish list hoping I had a dupe he could use. I struck out on Ryne.  However, we have another collection in common.  We both attempted to build 2002 Topps Total.  I knew there had to be at least one other crack out there! I was a set builder then and thought this will be so much fun!  Is it any wonder I gave up collecting the same year?? 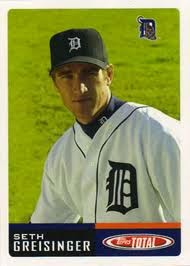 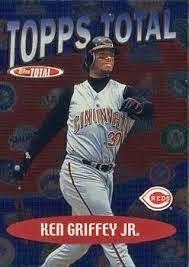 Ugly Insert
The base card design was simple, attractive enough at $1 a pack.  Not a product for anyone looking for nice inserts or hits.   I found a dozen or so cards for Tom. (I have about 200 more, if anyone is interested - hint hint...)   He may be a bit crazier than me!  In his gratitude for these simple cards, I received an incredible selection of cards: 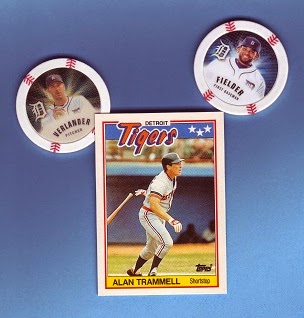 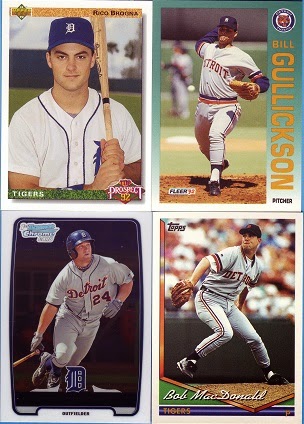 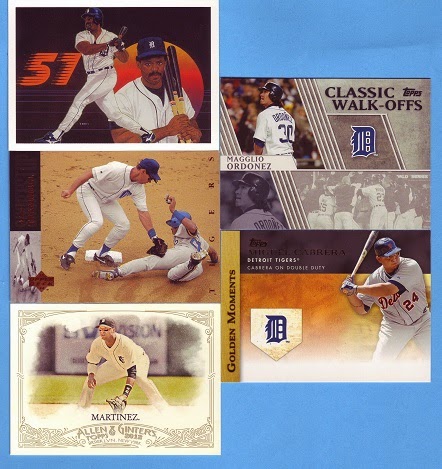 Fun fact:  Tigers re-signed Martínez to a four-year, $68 million contract on November 12, 2014.  Fun for Victor anyway. He plans to retire as a Tiger. 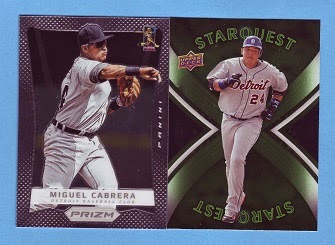 Fun fact: As a teen, Cabrera was a contestant in the Star Quest dance competition back in the early 90s.  He danced to Puttin' on the Ritz, winning fourth place.* 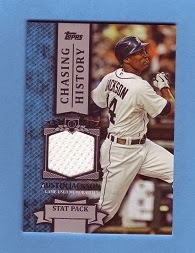 BIZ BRIGHT white swatch of  Jackson, traded to the Mariners this past Summer. Good-looking card!

And now, the Sandberg Report: 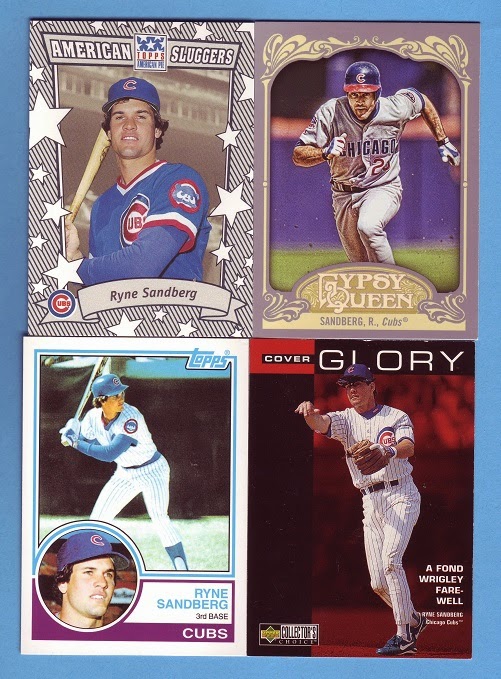 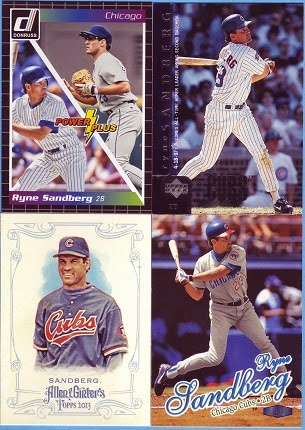 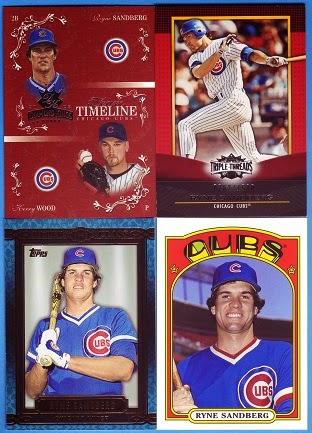 WHAT A HAUL! Gorgeous cards and I had only one of these (Gypsy Queen.)  Tom was tremendously grateful for a handful of Topps Total.)  Could it get any better?  Yes?  Yes!! 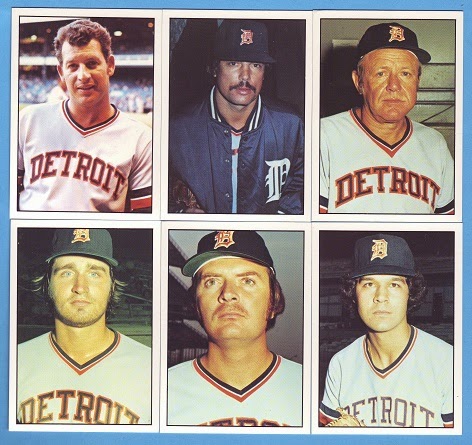 The Good Book offers info on this set for the price of an online subscription. Known as the 1976 Pure Card set due to the lack of borders, logos and signatures. It differs from other sets produced by TCMA in that it cannot be reprinted because of an agreement with the manufacturer.  (A summation offered to you at no charge.)  I like these cards.  Simple, clean, smooth cardboard. 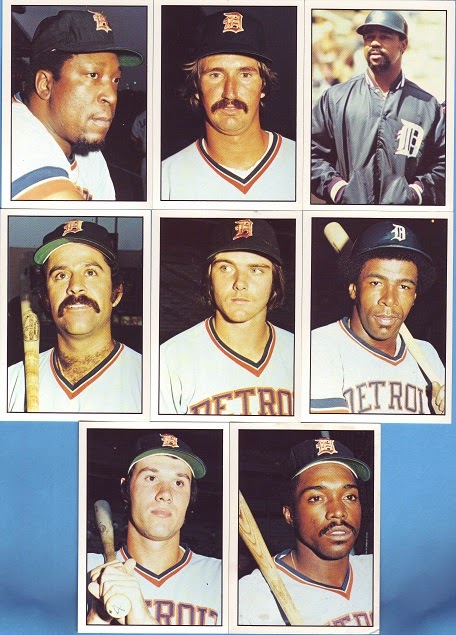 Tom, thank you so very much!  I'm tempted to send you my Total starter set (400 cards or so) in return for your generosity!  I doubt I'll ever finish it anyway.  Perhaps I'll pick it over for cards you still need, so update your list! A fun trade indeed!

If anyone out there has 2002 Topps Total for trade, please check out Tom's list.  He appears to be desperate.  Hey, if the Cubs could win the pennant, then surely Tom could finish this set.
Naysayers, yes he could.


*This is a  complete fabrication.
Posted by acrackedbat 4 comments:

My shopping is complete!  The last items arrived yesterday and I personally thanked my mail carrier for the packages.  I've kept her quite busy this past month. Now it's time to tackle the Christmas cards.  I'm sending a few more this year. Chunky envelopes with gift cards carefully tucked inside.  I only need to personalize the greetings and send them merrily on their way.

No matter if or how you choose to celebrate this holiday season, I want to wish all of you the best in Season's Greetings. If nothing else, it's a good time to reflect on this year past.  I want to thank those of you who welcomed me into your trading community.  I'm a rookie trader and there were a couple of minor mistakes while organizing trades.  I am THE Cracked Bat, for good reason.  I am human.

Peeking isn't allowed at Christmas. But I'm not traditional, so here's an inkling as to what will be in the cards hitting the mail this week: 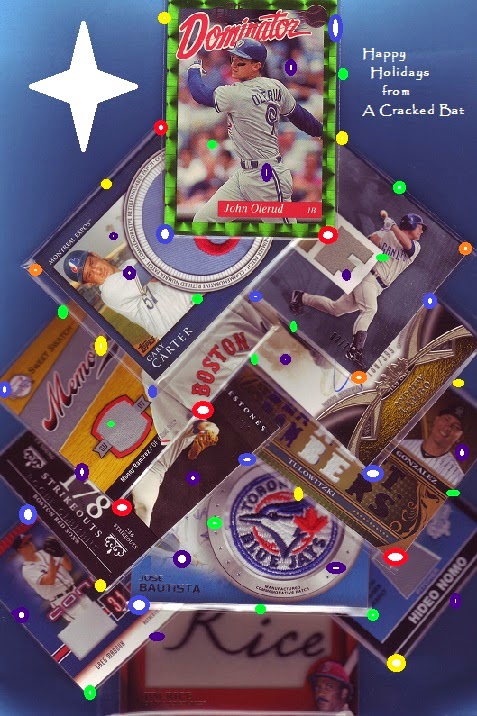 I'm a bit or big?  behind sharing some fantastic trades.  I'm ashamed. 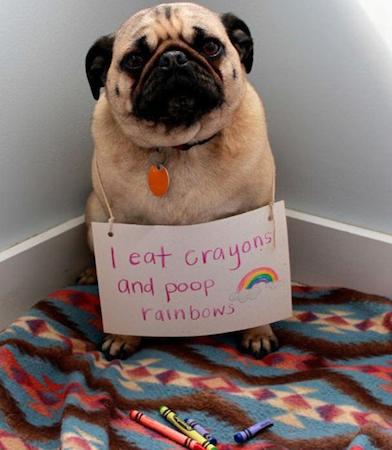 Not my dog (who poops rainbows anyway)
All the Way to the Backstop's Marcus Pond sent a great package a few weeks ago.  Five or so weeks anyway.  Please do not think I am unappreciative of your generosity Marcus!

There are two sets I dream of completing: 1972 and 1975 Topps.  Mr. Pond sent several bright 75s urging me onward. I now have about 25 of the 660 cards I need.   These 75s are sharp cards.  My favorite color combos are green/purple, purple/pink, yellow/blue and yellow/red.  Here's a colorful batch of White Sox: 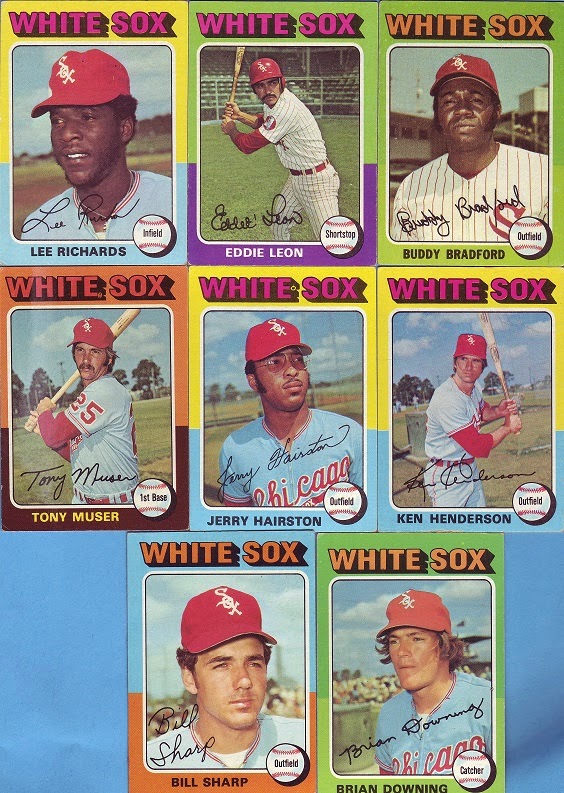 Of all these players, I'm most familiar with Jerry Hairston. His father was Sam Hairston.  Jerry is the brother of Johnny and father of Jerry Jr.  The Hairston family is one of only three families to have three generations play in the Majors. The Boones and Bells being the other two.  If there are more, please educate me. I'd like to know. *  The back of Jerry's card reads:  In 1971 Jerry led Midwest League 2nd basemen with 121 games, 260 put-outs, 333 assists and 77 double plays. 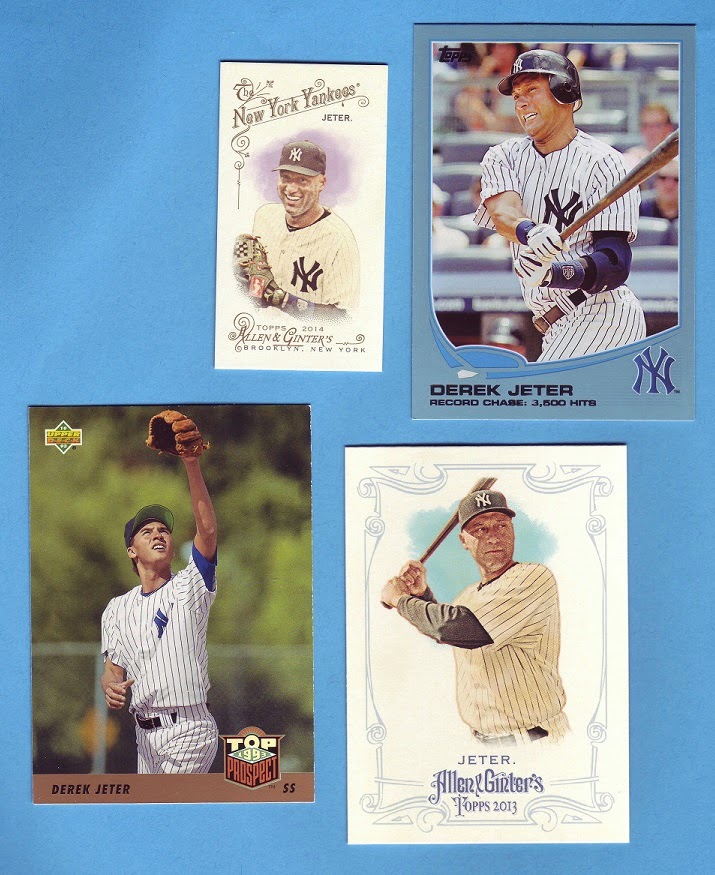 Jeter.  He was the one, the only, Yankee I've followed since beginning my collections. His debut coincided with my first player collections.  My other Yank collections include Berra, Mantle, DiMaggio, Ruth and Gehrig.  Those were some mighty cleats to fill and Jeter did.  He wore them well.  So very young on the 93 UD.  Twenty years later, the 2013 A&G.  Marcus, I was quite surprised to find this sweet, condition sensitive Upper Deck card.  Thank you!  It looks pretty darn good! 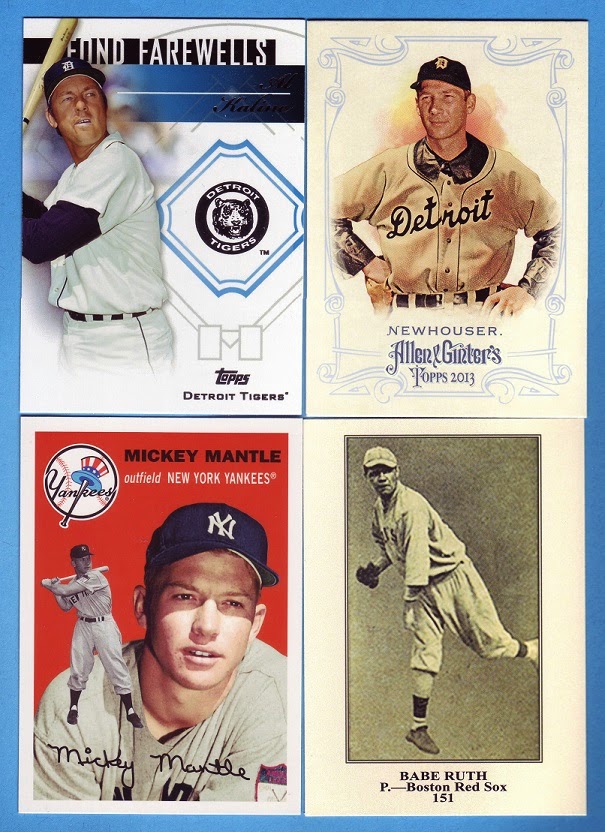 The Fond Farewells inserts are excellent!  I believe these are from 2014 Topps Update, featured above - Al Kaline.  This may be a little set I'd like to assemble.  Newhouser looks great on this 2013 A&G.   1954 #251 Mantle on The Lost Cards - 60 Years of Topps.  Super gorgeous card!  Unless someone here generously bestows the original upon me, reprints are what I'll own - and happily at that!   The Sporting News graced early collectors with Ruth in 1916 on what is commonly considered his rookie card. Appearing as a pitcher in his itchy scratchy woolen Red Sox uni. The most slender-looking Babe I can recall seeing. This is a 2011 Topps CMG Reprint.  I seriously want this insert set!

Another player fave of mine is Cal.  Featured below on 1992 Topps Gold Pre-Production Sample, 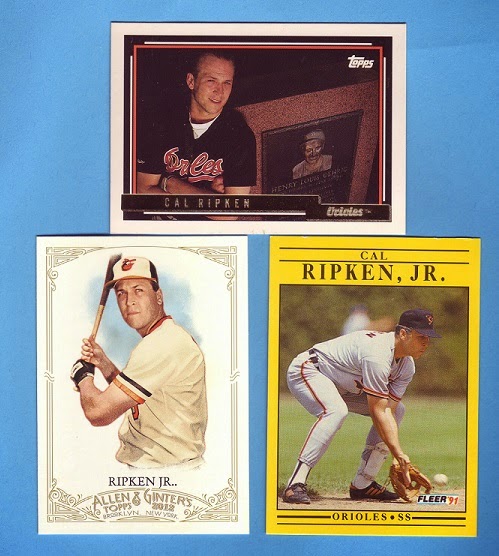 a 2012 A&G and the glorious yellow Bumble Bee 91 Fleer.  This is a fun yellow set of cards.  I am adding it to a list of cheap pick-ups.  Want want want.  Never enough.  See shame photo above.  I'm pathetic.

The newest PC addition is Jose Altuve.  I only wished could watch him play more often.  He's so much fun.  Altuve enjoys the game. One minute he's on first, smiling and talking with his opponent. In the same minute, he suddenly appears on second base still smiling and talking. The second baseman isn't quite as gullible to the friendly Altuve, 2014 AL Batting Champ. 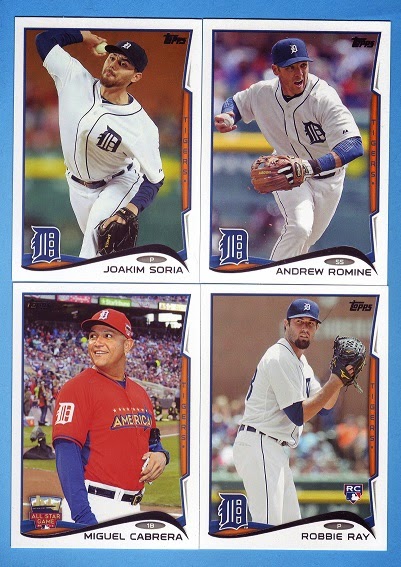 Marcus didn't forget the Tigers, new from the Update set.  I like the All Star cards in this issue.


Marcus included an auto'd mini from 2014 A&G - Diana Nyad.  In 2013, the 64 year old gained international fame after swimming from Cuba to Key West, Florida without the aid of a shark cage.  This was her fifth attempt.  Man, that is determination! An incredible feat of athleticism. A very cool card to own.  Thank you!

My shame is easing just a little.  Marcus is a regular blogger and great trader, and very patient!  Thanks again Mr. Pond!