This post is a two-for-one: a package received and a round of NICKEL cards and vintage from my April 6th visit to the Taylor MI monthly card show. You'll see a couple of these posts since I brought home 1000+ cards for trading/hoarding. My house is quickly becoming a storage facility, filled with cats and cards. What does that make me?


I've also updated my want list, hoping to eliminate a few set needs.  The latest additions include 2019 Gypsy Queen and more from 2018 Heritage.  I decided to complete several insert sets which means I need YOU!  Please check out the Send Help tab to see what has me crying, begging and pleading.

Staying ahead of  my traditional 'one year to share a trade' deadline, here's a wonderful group of cards from Greg's Collective Mind.  His blog theme is based on Star Trek's Borg.  Of all species found in the many Trek  series, Borg were the most frightening to me. Greg is nothing like them. He made me say that.

Greg's been known to take our want-lists along to card shows. Here's a look at a few of  his generosities: 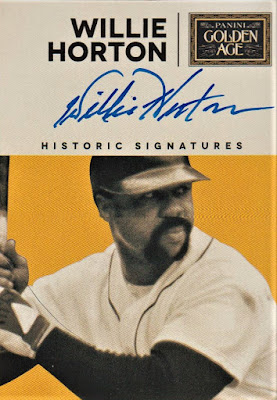 2014 Golden Age was a fun box break. I have a greater appreciation for this set with each passing year. Greg included this Sweet Willie Horton auto in the same package with this fine gem: 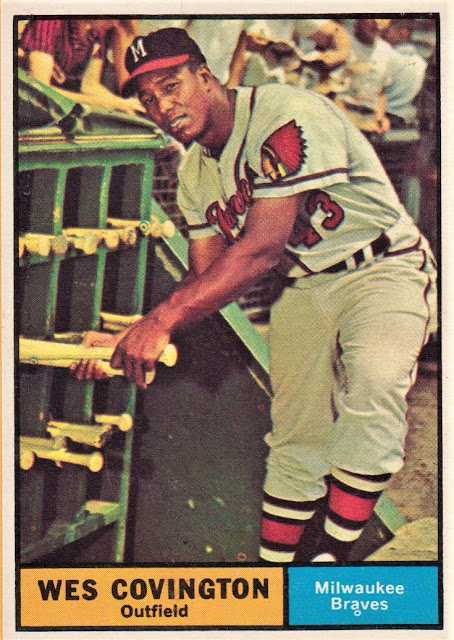 The highly coveted Covington! I love this card for a couple reasons; the bat rack is an obvious one, the old Braves logo patch another.  We're lucky to have this shot of Wes on his 61 Topps card. In 1961, Wes became one of those rare players to spend time with four teams over the course of one year: Braves, White Sox, A's and Phillies.  This was on my list of 'gotta have it' cards.

Greg, thanks for your thoughtfulness! I apologize for taking so long to share these on the blog.

Of course, 1962 Topps gave us another awesome Covington bat card, this time as a Phillie. We could've had him in any one of the four uniforms.  I picked this one from a dollar bin. 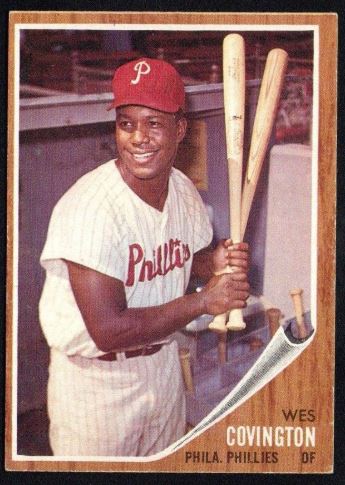 My favorite vintage dealer, Danny, has cards 15 for $10.  He's always adding new ones to the selection. I looked through 70 Topps to find a few bats I needed:


My favorite modern dealer had a stack of vintage cards, something you'll rarely find on his table. He bought a collection which included some old Bowman. Now, these aren't for everyone.  Glued into a scrapbook for who knows how many years, then ripped from their pages -  at a quarter per, they were coming home with me. 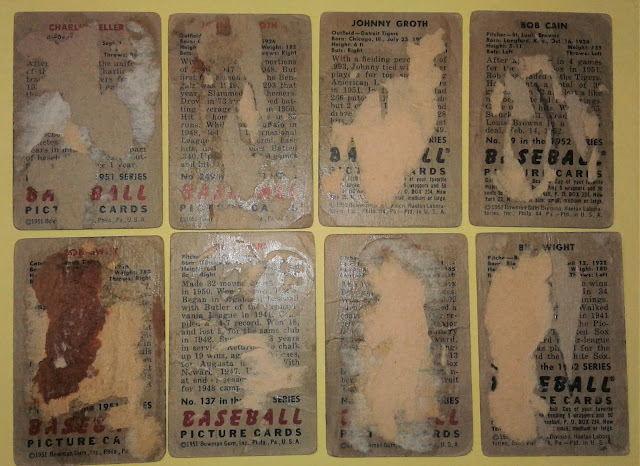 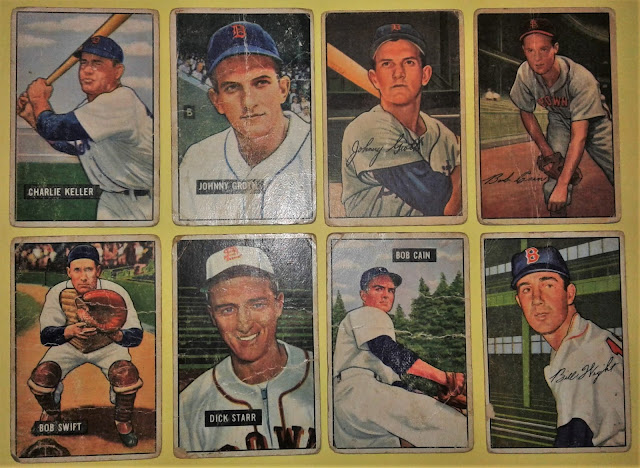 I'm not a full out condition snob but these don't fit my slowly growing collection of 51 and 52 Bowmans. I have probably a hundred or so, preferring them mid-grade. So what to do with them...?

And how about this old Snuffy Stirnweiss '48 Leaf for a whopping one dollar bill?  He's a keeper! 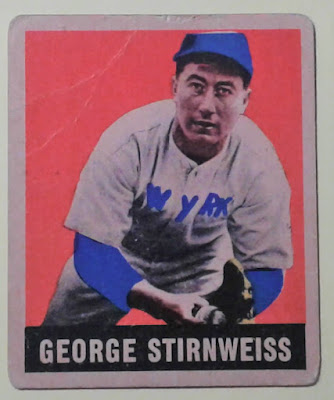 Many of the nickel cards will begin finding their way to new homes soon via PWE surprises. Some will show up on the Pick Pockets tab.  I have a 'no nickel refractor left behind' policy. I scooped up all I could find.  Rediscover Topps junk wax?  Got it. 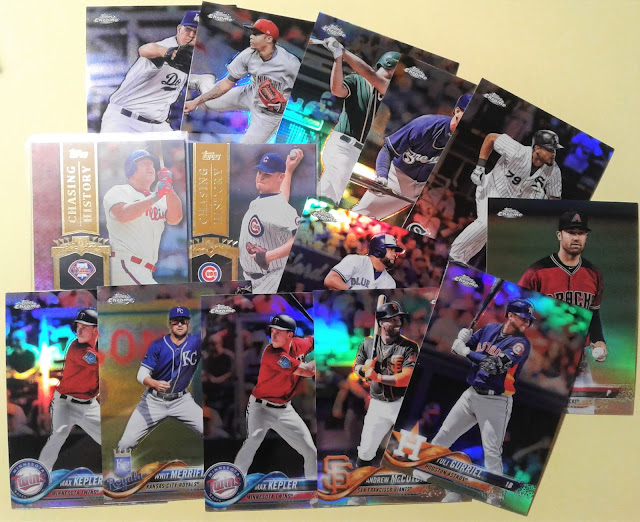 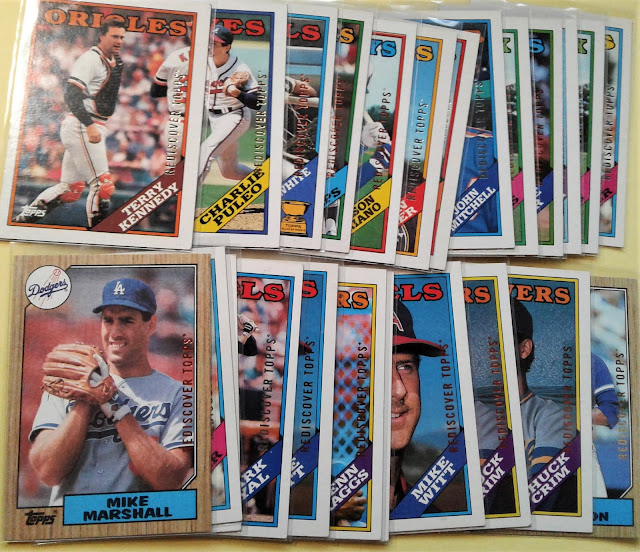 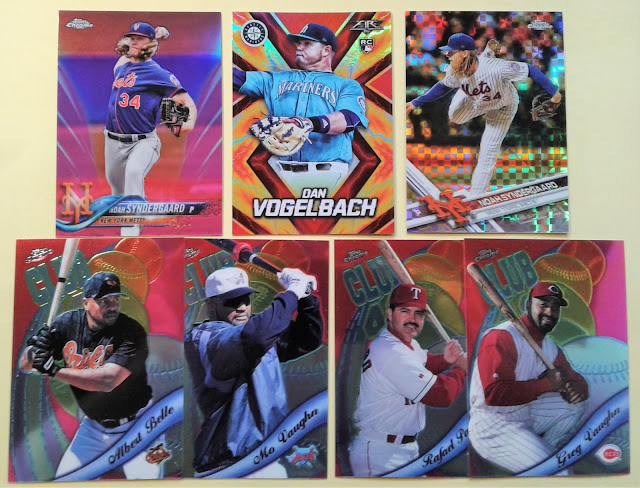 P-Town gets first dibs on the Vogelmonster. He loves those Cubbies but thinks Dan's the man, and has for some time!  Topps Chrome is colorful but not refractory. I've never seen these cards. 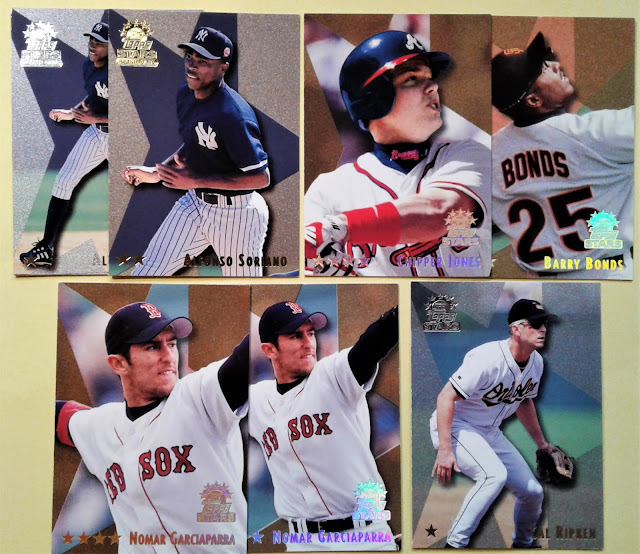 Topps Stars. A lot of thought went into this product. The more rare the parallel, the larger the photo crop is on front. Back off, Chipper!

Have a roll of nickels?  If you've learned anything about me from this post, it's that I'm a cheap date!

Email ThisBlogThis!Share to TwitterShare to FacebookShare to Pinterest
Labels: 1948 Leaf, 1961 Topps Wes Covington, 1970 Topps, card show, is that a roll of nickels in your pocket or..., thanks for reading!, The Collective Mind, trade post

This time last year, I was working a horrid amount of  overtime in an unappreciative environment.  During the current 'tax busy season', I've barely given that place a second thought. Three weeks into my new job has me thinking I could stay there for ten years if I wanted - if they wanted.  I've felt valued and appreciated since I walked in that first day.

This time last year, I received an all Astros package from Jason Carter. {Go easy on me. I mean well.} I'm not sure how I overlooked sharing these but here's look at of few of those cards. 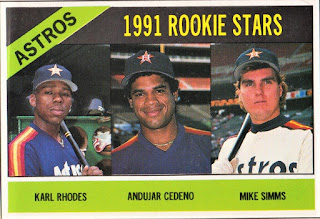 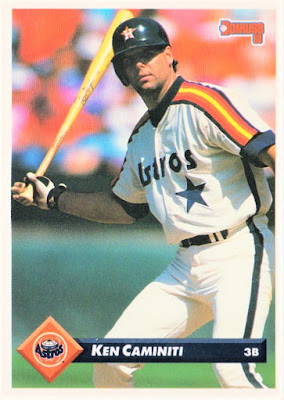 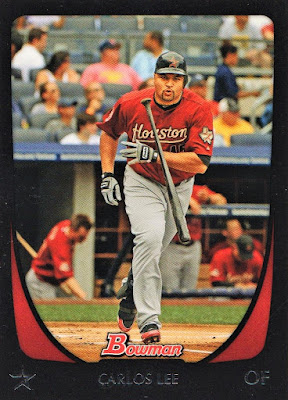 This is my favorite in the bunch! FLOATING BAT! Fits nicely in my mini-collection. Jason, these cards did not go unappreciated! I'm still enjoying them. If  you've never checked out his blog, The Writer's Journey, make your way over there. You'll find great write ups on music, tv & movies, toys, games, and of course, baseball cards! My regular stop on Jason's blog is the Goodbye tab.

While we're living in the past, here's another great batch from Baseball Card Breakdown. I shared these on Twitter at the time but a few deserve a closer look. 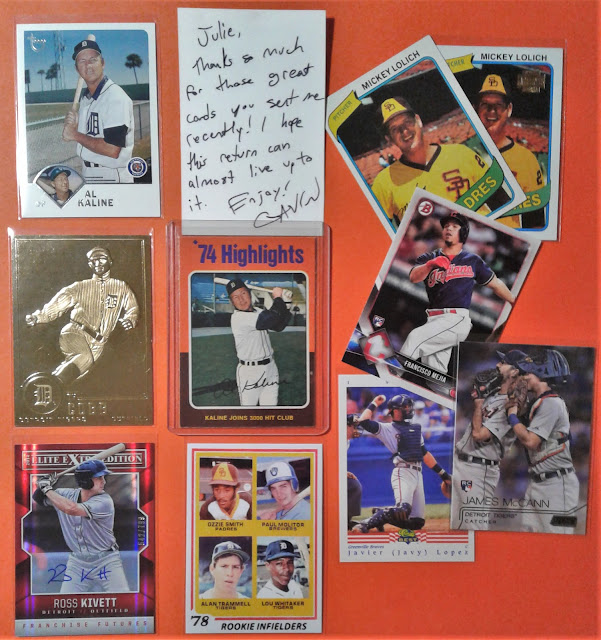 Gavin is a generous fellow. He sent a nice lot of cards with a kind thank you note. Mailers from him always contain a surprise or two, like this eTopps Austin Jackson Rookie, an early Topps scam  swindle web only issue. Each card was considered an IPO; available for a limited time, printed to the total number ordered. Sound familiar?  Topps graciously stored your online portfolio in their  vault until shipment was requested. The program ran for 12 years, producing just under 3000 different cards with nearly 4,000,000 cards printed. 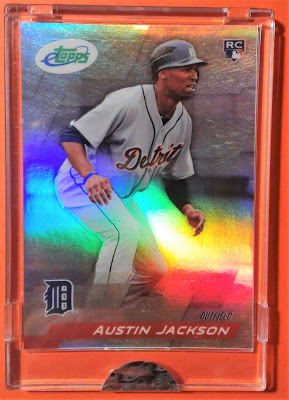 Something Gav often adds to his mailers are the customs he is widely known for! I was the fortunate recipient of two.


I'd say it's fairly difficult for Gavin to outdo himself but... 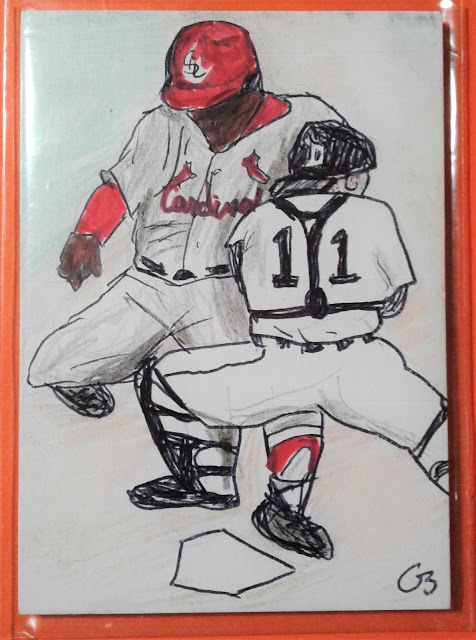 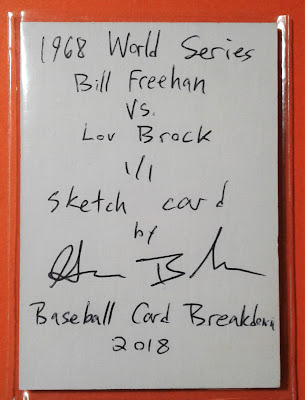 Oh my word, when I received this card...! The classic, unforgettable play at the plate from the 1968 World Series!  Bill Freehan is a favorite on this blog {if its design wasn't an obvious tribute.} This sketch card is a centerpiece in the Freehan collection. All. Mine.  I'll never know how Freehan held Brock off.  He had a little help from Willie Horton's arm. Willie doesn't make the throw, this play never happens. My favorite moment from the entire series. Don't tell Lolich or McClain.

My thanks always, Gav!

A week into my new job, all is going well! Having never used it, I'm now immersed in Quickbooks.  I've yet to do anything for which I was hired. They keep calling me a 'numbers person' and I continue to correct them. But you worked for an accounting firm. Yes, on the administrative staff.  On day one, I was given access to all their financials and banking information. No problem. I'm now using a pencil everyday.  It's been 40 years since I used a pencil for anything but marking the wall for a nail.

To celebrate my new career {?}, a friend and I made the 1.5 hours drive to Saginaw for a 50 table show.  All dealers were new to me but most had little to offer.  I found no affordable vintage. Several dealers had junk wax boxes for sale. $30 for a box of 1991 Upper Deck? No thanks. I found two tables with a nice assortment of nickel and dime cards, and box of autos and relics for $2, $3 and $4 each.

Wanna seen the shine a dime can get ya? 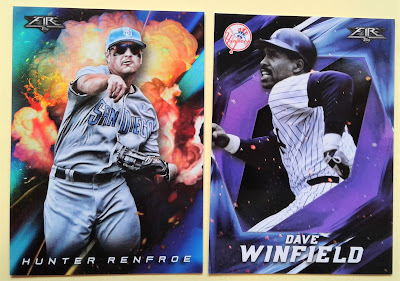 1996 Special FX were righteous in their day! High priced goods then, now worth at least the dime paid. I was tempted to draw bars over Mondesi's infield window but why ruin a nice card? 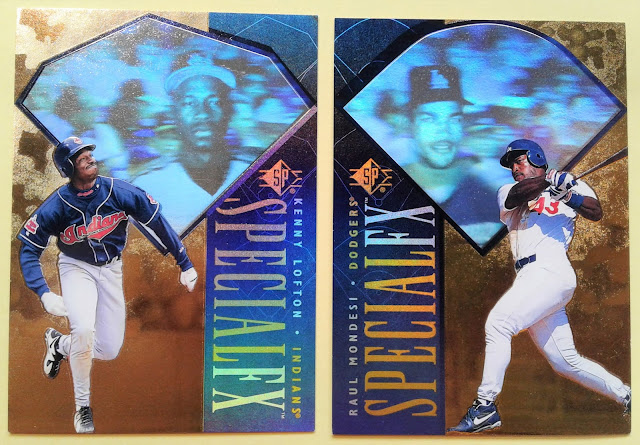 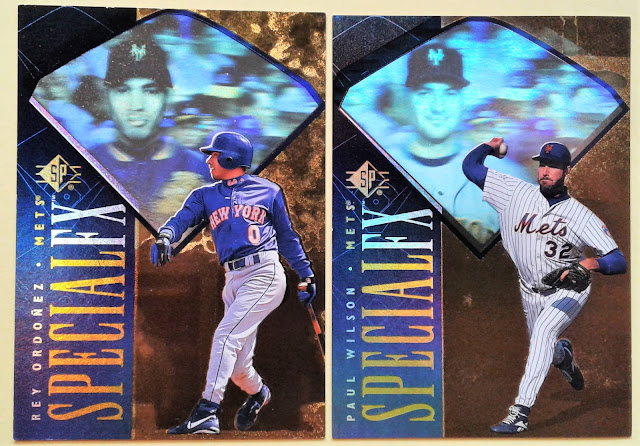 This batch of foiliciousness  comes from 1998 Aurora Pennant Fever.  Now it may be that these goldies aren't worth much more than .25 - $1 each but how often do you see them? This was my first time so I bought 'em all - in case you want one, of course. There are two red parallels included: 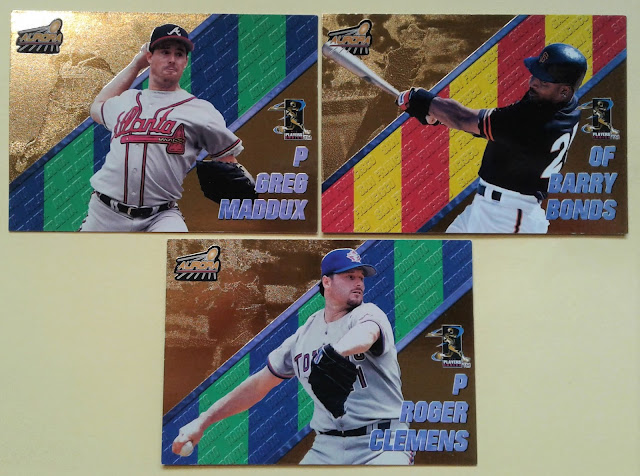 I can only wonder what the fella before me pulled from the box. I saw the stack he was making and winced. All these cards came from the same box. He said, 'don't worry, I left you some.' Why leave any? These aren't big names but what fun cards to add to your hoard!!!

These are for my America binder; also known as the Independence, RW&B, Patriot and/or Anthem binder. I can't make up my mind and I don't have to! One NICKEL each! Stick it, my fellow Americans.

The same dealer had  boxes full of one, two, three and four dollar cards. I didn't find too many for myself but picked a few for some trade pals so I won't show them all, lest the surprise be ruined.

Another card at $4 for the same binder, or perhaps my 70s Pop Culture binder?  Bye, Bye Miss American Pie... Pie? I want some - Boston Cream, of course! 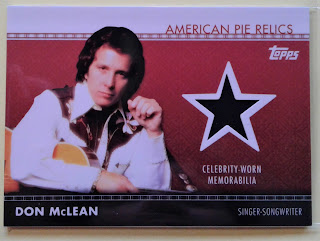 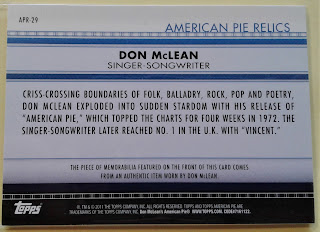 Now here's where the purchase gets tricky. I only had so much to spend. This batch features a $2 swatch and $3 autographs. I also have a rule: I don't collect Yankees unless they're deceased. Well then, why did I need these cards and none of the 15 left behind?

Hank Behrman, d.1987, meets criteria except he's a Dodger. A rookie with Brooklyn in 1946, traded to the Pirates in '47, back to the Dodgers the same year and finally to the Giants in '49. He finished out his four year career there, 24-14 lifetime. Hank appeared in five games of the 1947 World Series with the Dodgers. I like this card, with its swatch and a smiling Behrman. I may keep it but could trade for the right card. 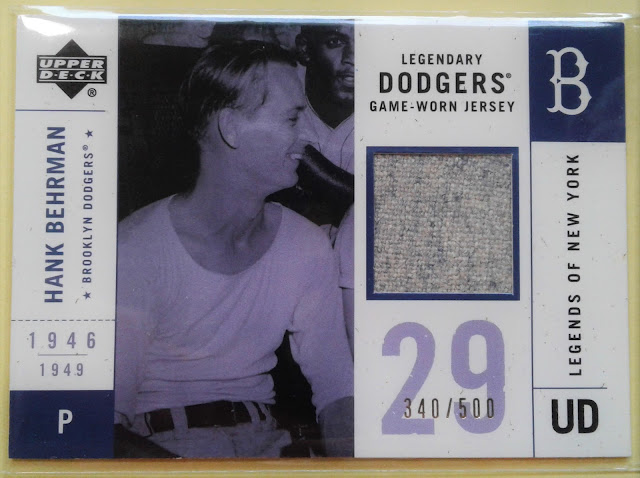 Lee Mazzilli, still living. Fail. Looking all Bucky Dent. Win. He was actually traded for Dent by Texas, sending Lee to the Yanks. I chose this card for the most shallow of reasons. Cute factor. 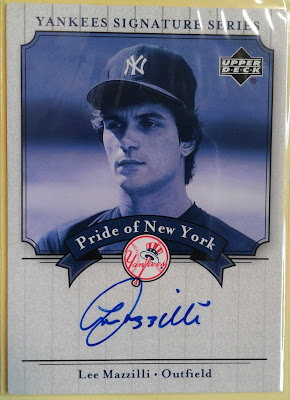 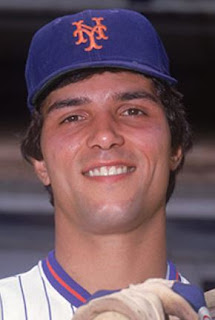 1975 NL Rookie of the Year, the Count has one of the games' more fun nicknames. John hit a home run in his first ML at bat.  Apparently he also hit his wife on more than one occasion. A long list of charges ranging from assault, burglary and making terroristic threats saw him indicted in 1997. After two years behind bars, he was acquitted after the most serious charges were dropped. He was sentenced to three years probation for criminal trespass and simple assault. SIMPLE?  I haven't decided the fate of this card. A nice signature for a fellow with a smudged history. 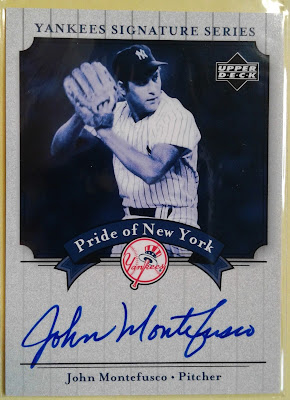 The last gem was an easy choice. The name Alou includes brothers Felipe, Matty and Jesus, along with Felipe's son, Moises. Papa Alou played for several teams over his 17 year career and managed fourteen more with a record of 1033-1021. He was the NL Manager of the Year in 1994, leading the Expos to the best record in baseball before a strike ended the MLB season.  Felipe's player stats are noteworthy: .286 BA; 206 HRs; 985 runs and career fielding percentage of .986.  This card, with its beautiful signature stays with me. 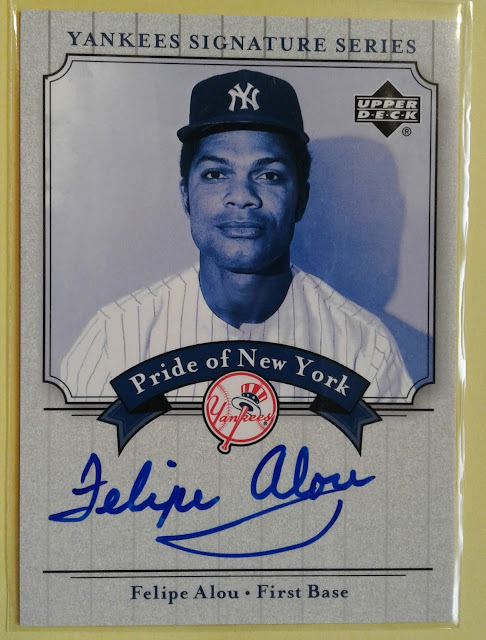