The catch is this: an awesome selection of cardboard from an awesome blog,  Catching Up With Collecting.  Jared sent a fat stack of cards!  I can't share them all, not even all my favorites.  I'm forced to choose so here's a glimpse into the padded mailer: 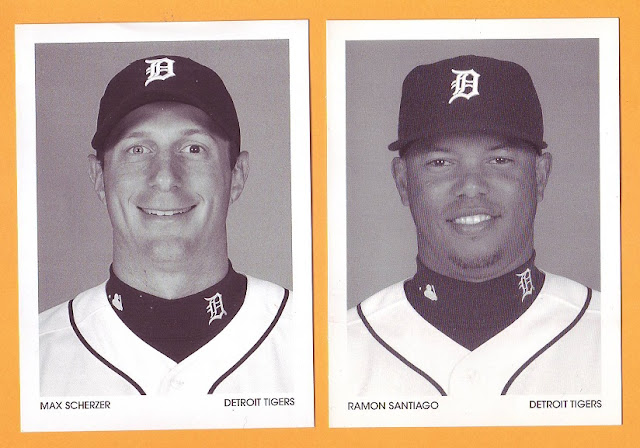 Publicity shots of a couple Tiger men.  A color photo of Scherzer would've shown off that pretty baby blue - and brown.

Jared did not forget my great love for Altuve - one of today's best 2nd basemen. 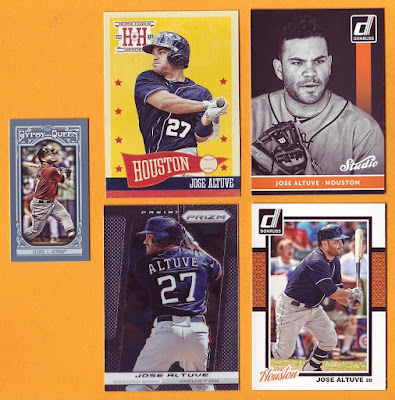 I recently read The Bird: Life and Legacy of Mark Fidrych by Doug Wilson.  Mark Fidrych was one of the game's great personalities.  Quirky, sincere; a fan's ballplayer.  When his career was cut short, baseball lost a great ambassador.  His family and friends lost a very good and humble man when he died in a tragic accident at 54 years of age.  The book is a great read, and frankly I didn't want it to end.  Mark was very much alive as I enjoyed page after page.  The final chapter came and with it, Mark's passing. 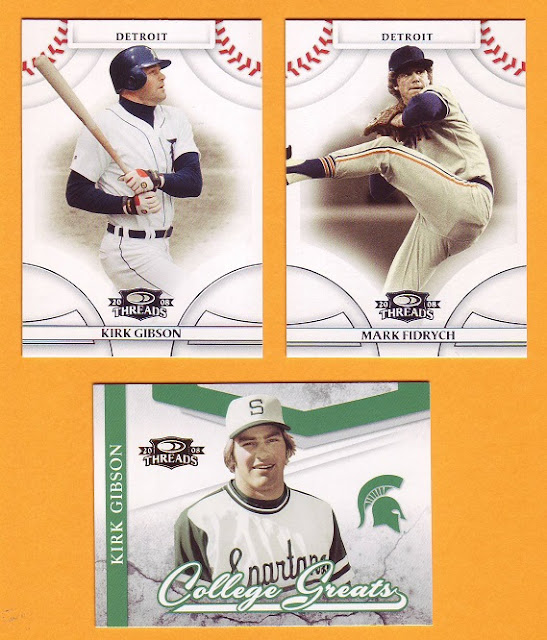 Gibby is sporting his college colors on 2008 Donruss Threads. Since moving to Michigan, I've been asked many times if I follow U of M Wolverines or Michigan State's Spartans.  My answer: Oklahoma Sooners. 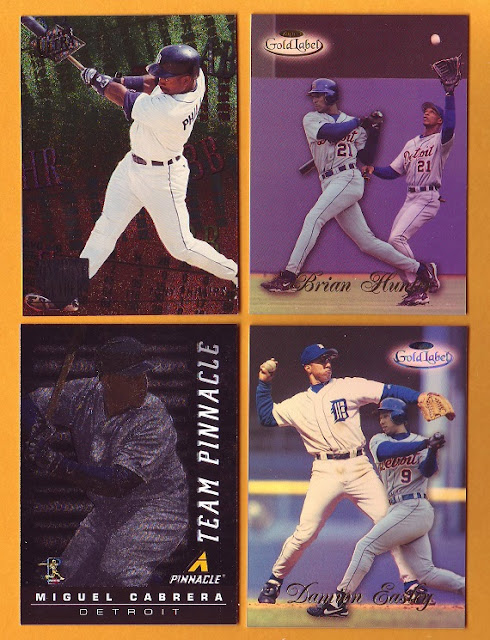 These cards are so colorful, I wished the scan had turned out better. Upper left of this group features a 94 Fleer Ultra On Base Leader foil beauty - Tony Phillips.  Tony passed away on February 17, two months shy of his 57th birthday, of an apparent heart attack. He spent five years of an 18 year MLB career with the Tigers, 1990-1995 where he walked 519 times. 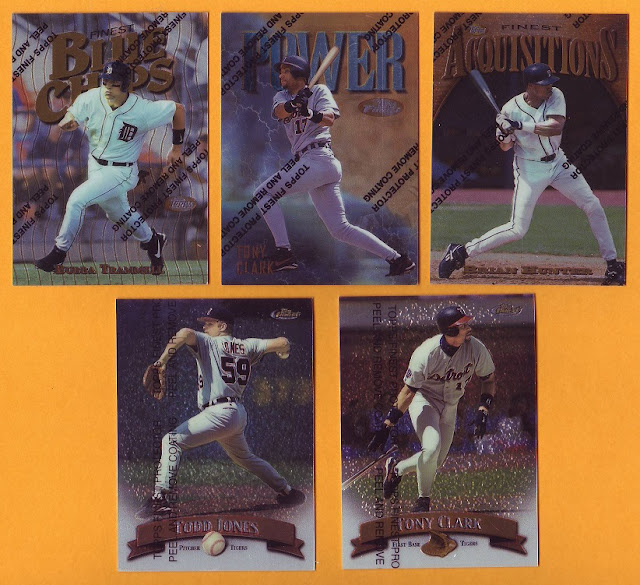 The era of  peel or don't peel:  from 97 and 98 Topps Finest.  To peel is better.  Many cards that weren't peeled  have yellowed splotches.  The top right card - Brian Hunter - shows some of this yellowing at his belt buckle. 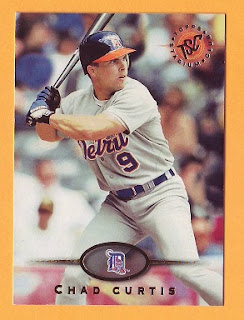 CHAD CURTIS: then and now 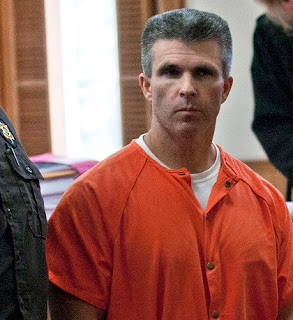 Chad began serving 7-15 years in 2013 for criminal sexual conduct.  I do not know if the Gus Harrison Correctional Facility in Adrian Michigan has a prison ball team. 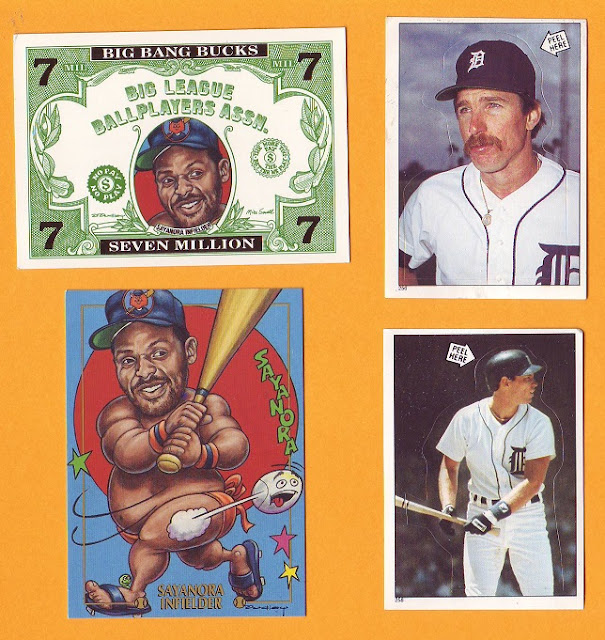 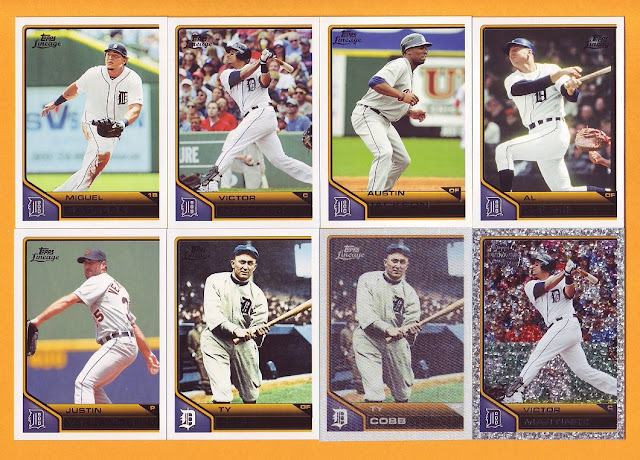 2011 Topps Lineage in its only year of release. Topps wasted a great idea on this product.  It would've been a nice flagship design.  Clean, white borders. Delightful!  Ty Cobb cloth sticker and gorgeous Diamond Anniversary Martinez. 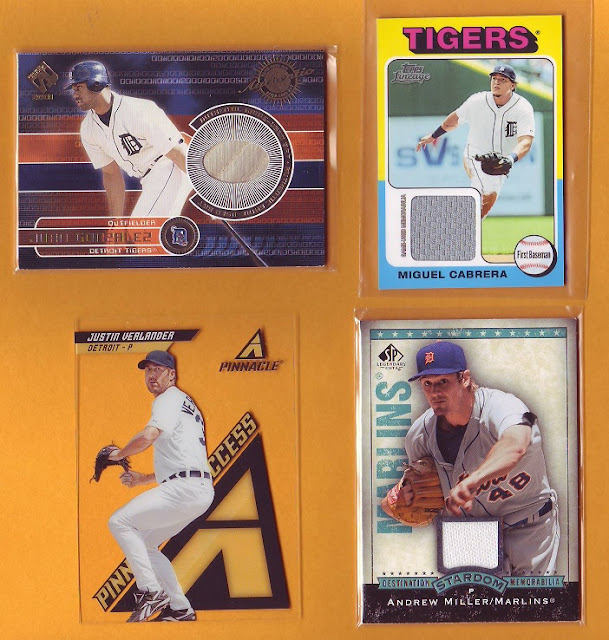 A nice lot of relics and  2013 Pinnacle Access - a see-through card - as a friend of mine would say.  I think there is a hint of cork in the Gonzalez bat chip.  Hmm. 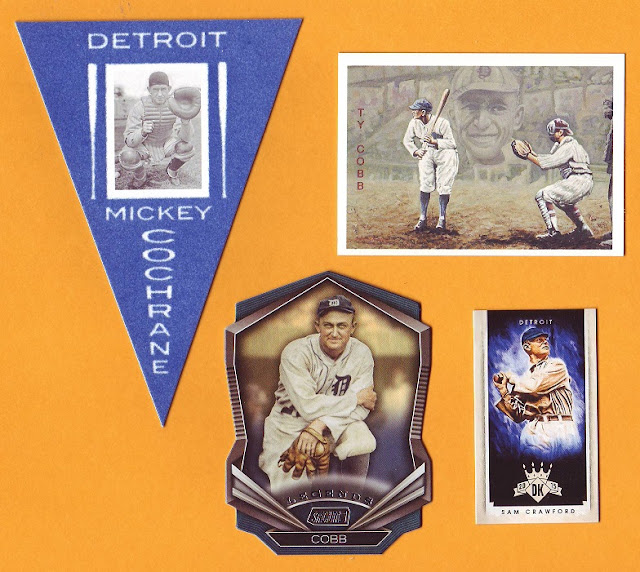 A nice arrangement of vintage players.  Ty Cobb is an absolute favorite, and Cochrane one of the greatest catchers.  The pennant is from 2013 Panini with the reverse showing 1947 - his HOF induction year.  I love these pennants!!!

Jared, you hit the spot with these!  Thank you very, very much!

A reminder for anyone interested - LONG SHOT, Mike Piazza -  a book giveaway is happening right now on this blog.  Go HERE to comment and enter.  In recognition of the Trump presidential campaign, no entrants from outside the USA borders are allowed.
Posted by acrackedbat