FUJI: Man of the Cloth 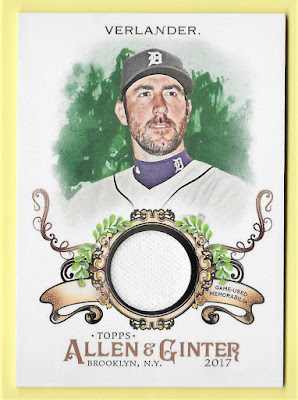 I wanted to title this post Material Girl. Rather than making display of my airheaded self-centeredness, deemed it best to focus on Fuji's thoughtfulness. Fuji doesn't trade on a regular basis.  He sent a round of packages out in February to a LOT of folks. When you are the recipient of others' generosity, it's difficult not to reciprocate. If you are Fuji, it's impossible. [Not to say I was overly generous. There was no cash in the mailer I sent.]  Fuji does exchange cards but is more likely to do so PWE style. It's certainly become my way. Done right, PWEs are safe for card transport -  and affordable. I sent a stack of cards to Fuji with no obligation to return the favor. The note enclosed should have said as much. A self-confessed dimwit, I likely forgot the note entirely.

Fuji filled the package with relics. A relic myself, I was drawn to this card, the second oldest in the group. I hadn't heard of Cleven so threw myself at a baseball reference site only to be foul-tipped to Wikipedia. This may be the most baseball I see all year. Wicker tells me Brent is now 36 years old. It seems this second-round Tiger pick never gave up on the game. While showing promise, Cleven bounced between MLB and the minors for several years. He became a Double-A and Independent League star.  Now a player/manager for the Cleburne Railroaders [Texas], he led them to 57-33 record in his first season in 2019. This is a fellow who loves the game. If I still lived in Texas, a trip for Cleburne baseball would be a must. I wish him great success!

The package was all Tigers but for one, catcher JT Realmuto. This card was an extra nice touch. I don't pick up many of his cards and have no relics. I haven't been a fan of the Holiday issues. Topps continues to spit out products like a bird regurgitates to feed her babies. Reusing the same pictures, themes and tired old reprints, capitalizing on a collector's need to have it all.  We aren't all wired that way but I once was, back in the 90s.  I am so happy to be over that hump. I can't imagine having that need in today's hobby.  All that is to say, I really like the design on these two cards!  The swatch in the middle of the bow is admittedly clever. {I loathe you Topps. How you mock me.} 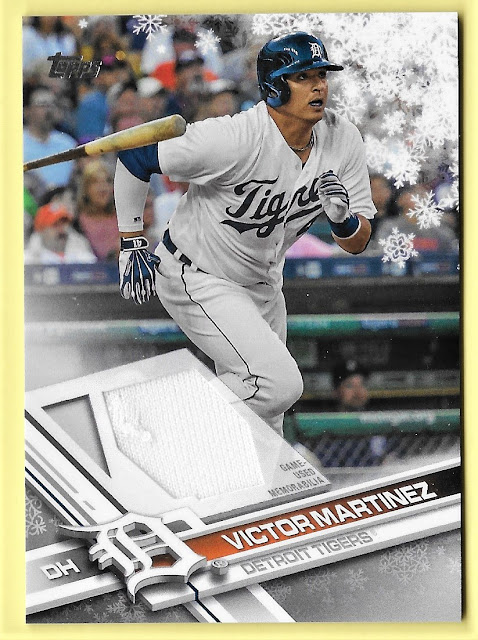 The remaining relic is from 2017 Holiday. Not certain but there may be a JV appearance in the dugout. My eyes fail me a bit. Recently I'm struggling to read white font on black backgrounds. Other colors against black are also troubling but white is the most difficult. The letters blur together no matter how much I enlarge the page. Some of my favorite blogs use these color combos which are sharp-looking. If  it seems I'm not reading or commenting on blogs with this formatting, please forgive me. I'm doing my best to be there. It is time for an eye appointment, once it's deemed safe to do so. Now back to the card...

I'm not extremely OCD but would've liked the material rotated slightly to the left so the fabric pattern flows with the design. I do like the little snag. Swatches with snags and dirt seem a touch more authentic. They probably keep a seam ripper and bucket of dirt in the production area to achieve this affect but I like to think it's player worn. The floating bat photo is divine! I collect bats racked, multiplied, cracked and broken but my favorites are those stilled in time. To count in my collection, 3/4 of the bat with barrel showing must be in the shot. This is a great example.

Have you read The Chronicles of Fuji?  Personal and thoughtfully written - and cards cards cards {and maybe a few legos.} He has an amazing collection of autos and relics. Drop by to see for yourself. Thank you Fuji!

A note to all: the primaries are coming!  I'll be posting soon on our upcoming election season.  Stay tuned! It's not politics as usual.

To close this post, I was torn between using a Madonna video for either Material Girl or Holiday. I chose neither and spared you all. You are welcome.