No Blog? No Matter.

I've received a few cards recently from non-blogging collectors. Alex emailed to say he had a special card for me but would say nothing more about it. I knew of him only from reading Gavin's blog:

He offered to include a Walewander mentioned in his guest post. To understand the story behind the card's inscription, check out the link above.

I wasn't turning down a Tiger auto. I offered a return trade but Alex does not have an interest in recent cards. 'Recent' is anything after the last Lance Johnson card in 2000 but mostly nothing later than 1988. He's been collecting minor league sets for 30 years. I'm sure he has some fine treasures within these sets.

The 89 Fleer Jim W auto arrived accompanied with a new Dutch for my collection! 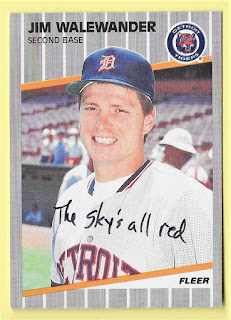 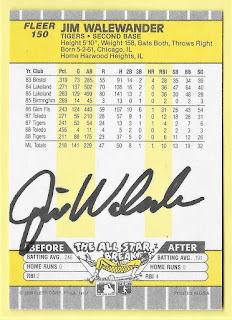 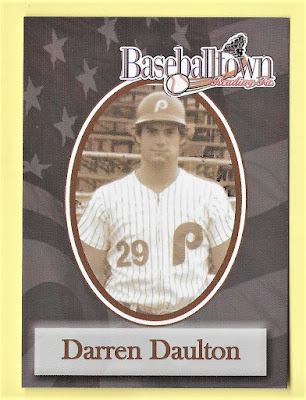 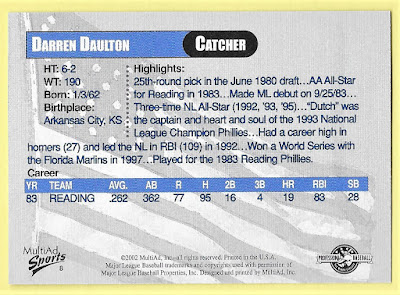 Wow. A Daulton from my TCDB wantlist and one I never expected to come across! Darren remains a fan favorite to this day. That he appeared in a 2002 set a few years after his retirement is no surprise. Now that he's passed, I hope he'll have another card or two in a fan-favorites type tribute.
Thank you, Alex! What a thoughtful surprise!
While watching the World Series, I took time to go through full galleries of a few sets on TCDB: all years of Stadium Club, 1983 Fleer and 1993 Upper Deck. I built quite a wantlist this way. I have no desire to complete these sets but have been drawn to many of the Fleer and UD cards, thanks to our bloggers! Fred Pike, my pal north of the border, hooked me up with a nice batch of Upper Deck.
Cracked and broken bats: 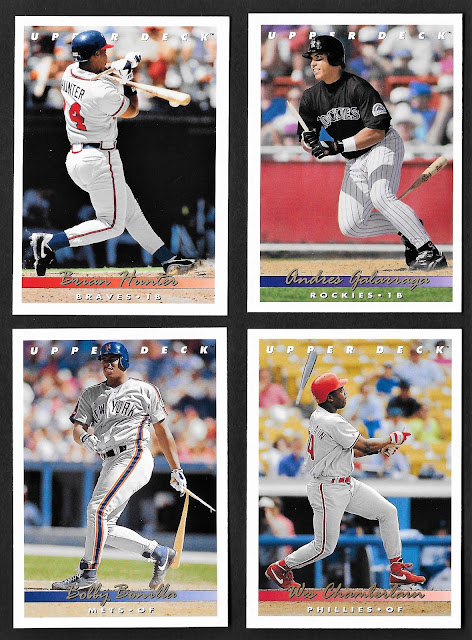 The next four are beauties. I love the long dugout shot behind Deer. Both men seem to be unaware of the camera, minds on the game. Gladden of course, is in a throwback uni. Both cards represent the 'reflective' part of my baseball card collection. 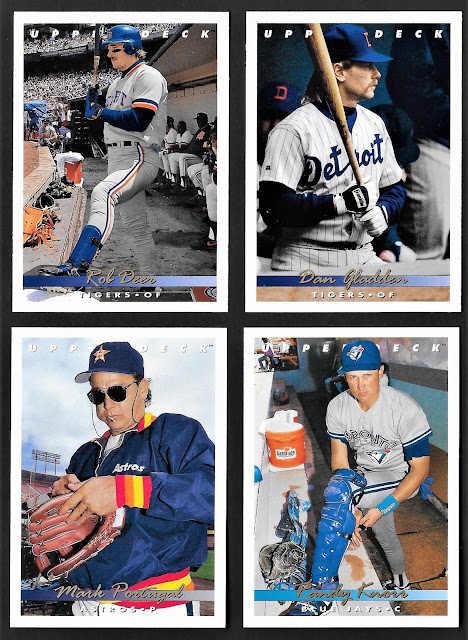 Portugal with a sucker, in shades and signing a mitt - all while wearing a fantastically colorful warm-up jacket! I wouldn't have given two cents for this card in 93! I'm proud to say I've matured as a collector. Knorr of course, is adorning himself with gear in another grand dugout shot.
The next two cards are going into my 'fan shots' stack, headed for a binder spot. Crowd reactions are especially entertaining to me. Lacking the appearance of strong interference, I think perhaps the home team was batting. Any thoughts on this? It's hard to determine by the crowd's apparel, lacking in team colors. It's possible the Reds are playing the Padres as I spy a cap with 'S' and a partial 'res' on a shirt. 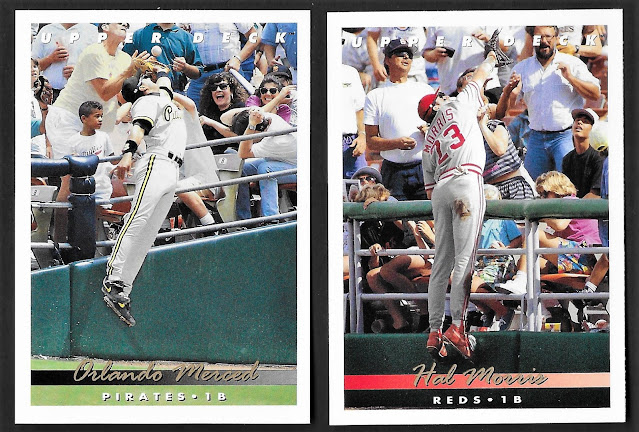 I'm adding my full wantlist for both UD and Fleer to my set help tab. Perhaps some of you have these laying around??
Thanks to both of you gentlemen! You may not blog but your presence in the blog community is noted and greatly appreciated!
I spend less on new product every year. Heritage and Stadium Club may see a few of my dollars in 2021 but discovering sets like 93 Upper Deck delight me. I'm paying attention to your posts and shares, and watching my wantlist grow. At least I have someone to blame.
The past couple of months have found me less interested in chasing new product. I don't feel like I'm in a hobby funk only that my interests are changing. I've also picked up an old friend which is taking time away from cards - my guitar.  At one time, I was a fairly decent strummer.  It's been a few years now since I played. Certainly sounds like it too. If you see a bit less of me over the next month, don't be alarmed. I'm having a six-string affair.
Posted by acrackedbat